Days after he pulled up Amit Shah, CBI judge shifted

HC registrar general says he wanted transfer. On June 6, Shah had made a similar application before the court citing health reasons. 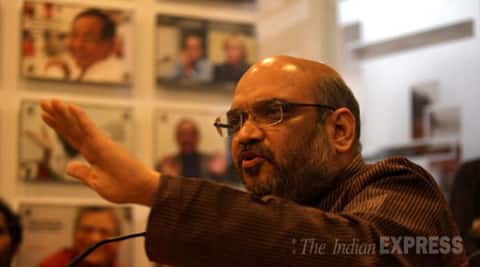 Days after special CBI judge J T Utpat pulled up BJP general secretary Amit Shah for failing to make an appearance before the court hearing the case pertaining to the alleged fake encounter of Tulsiram Prajapati in Gujarat in December 2006, the judge received his transfer order on Wednesday.

Sessions judge Utpat, who was transferred to Pune, has been replaced by judge B H Loya. The transfer order came on the day the special CBI court was expected to pass an order on the discharge application filed by Shah, a close aide of prime minister Narendra Modi and one of the key accused in the alleged fake encounter case.

When contacted, Utpat declined to comment. Registrar general of the Bombay High Court Shalini Phansalkar-Joshi told The Indian Express that the High Court had acceded to a request made by Utpat towards the end of May or early June.

“He had made a representation to the High Court for a transfer to Pune because of his daughter’s education. We often get such requests from judicial officers who seek transfers because of personal or family reasons,” Joshi said. She said apart from Utpat, three other judges had also been transferred.

On June 20, Utpat had reprimanded Shah’s lawyers for urging the court to exempt him from making court appearances. An application submitted to the court by Shah’s lawyer Robin Mogera had read, “Shah is engaged in political work in New Delhi and therefore not about to come to court.”

On June 6, Shah had made a similar application before the court citing health reasons. He had sought to be excused from a court appearance stating that he was highly diabetic and needed to undergo some tests.

“Every time you are giving an exemption application without assigning any reason,” Utpat had then said to Shah’s lawyers.

The CBI had named Shah as an accused in the fake encounter cases of alleged Lashkar-e-Toiba operative Sohrabuddin Sheikh and his wife Kauserbi in 2005 and a similar killing of Prajapati, a key witness in previous encounter, in 2006.

In the alleged encounter near Gandhinagar in 2005, the CBI had also chargesheeted Shah, BJP leader from Rajasthan Gulab Chand Kataria and Andhra Pradesh IGP (Intelligence) N Balasubramanyam, among others. The Supreme Court had, in 2012, directed the trial to be shifted to Maharashtra from Gujarat as the CBI had contended that the witnesses in the case were being intimidated.