Bharat will become Independent in true sense only when cow gets the respect it deserves. 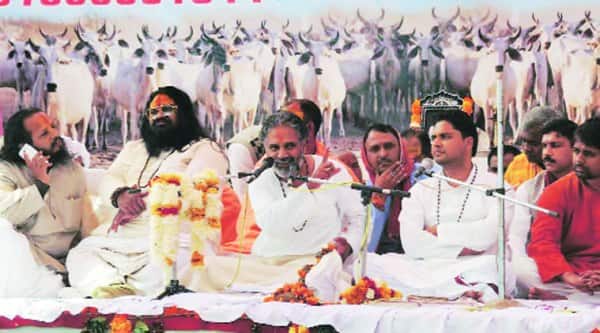 Seers and local leaders attend a rally against cow slaughter in Bhopal on Sunday. (Express)

* Had Mata Kaushalya not eaten kheer made from cow milk, Lord Rama would not have been born.

* Once you consume cow milk you won’t commit any crime. The only solution to corruption is cow milk.

* Even when he was 120 years old, Lord Krishna looked like a 12-year-old because his soap was made from cow dung.

* Bharat will become Independent in true sense only when cow gets the respect it deserves.

These were among the pearls of wisdom dished out on Sunday by speakers at a rally organised by Bharatiya Gau Kranti Manch in Bhopal as part of a nationwide campaign seeking death sentence for cow slaughter, “Rashtramata”  status for the animal and a separate ministry in each state to deal with the matter.

Called Gauvardhan Jan Jagaran Sabha, such rallies have already been held in a few other state capitals.

“If the government does not accept our demands in 2015, not less than 25 lakh Gaubhaktas (cow devotees) will storm New Delhi in February 2016 to make that happen,’’ warned Gopal Mani Maharaj, the main speaker.  He began most sentences by making the thousands who attended the rally repeat a prolonged “maa” raising both hands.

Most speakers demanded that the government offer cow milk free of cost to children up to 10 years, the age by which all “sanskaras” are acquired.
“What separated Krishna from Kansa was that he consumed cow milk, while his uncle consumed liquor and became evil,’’ said Gopal, adding that “the solution to corruption lies in cow milk because it makes one cultured”.

Madhya Pradesh Home Minister Babulal Gaur, who also addressed the rally, said he was confident all demands will be accepted. He recalled that after the BJP came to to power in Madhya Pradesh, cow slaughter was made a punishable offence in the state.

The rally was also attended by BJP MLA Vishwas Sarang and a few Congress leaders, all of whom touched the feet of religious figures on the dais.

A young Mohammed Faiz Khan, who the organisers said has made many speeches to promote the cause, told the rally “it was a matter of shame that “Bharat, a Vishwaguru at one point, has become the biggest exporter of beef”.

Less than 4 per cent of old cars get fitness paper: Govt data