Bharti said that sadhus and saints have assured her to help government to reduce pollution. 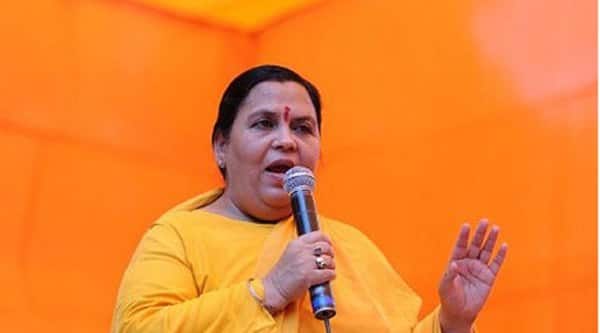 Uma Bharti said that the sadhus and saints have assured her that they will accept any technology which the government deems fit to reduce pollution.

With cremations on the ghats of Ganga in cities like Varanasi and Haridwar adding to the impurities of the river, the Centre has constituted a committee to recommend technologies to cut down on pollution.

Water Resources, River Development and Ganga Rejuvenation Minister Uma Bharti said here that the sadhus and saints have supported the idea and have assured her that they will accept any technology which the government deems fit to reduce pollution.

“Usually cremation grounds are close to banks of river Ganga. The sadhus and saints have said they will accept any technology which ensure that contents used in the cremation are not dumped in the river. To clear the new technology, we have formed a technical committee comprising Director, National Environmental Engineering Research Institute, Secretary Central Pollution Control Board and a senior professor of IIT-Kanpur,” she said addressing her ministry’s 100-day press conference on Friday.

Bharti said the committee will look into various types of technologies to ensure that rivers are not polluted.

She termed the move as one of the several short-term measures to reduce river pollution.

Several Hindus prefer to get cremated on the banks of river Ganga on ghats of Varanasi and Haridwar for salvation.

Bharti said government is also concerned with the ‘puja samagri’ immersed in rivers as it is a major factor contributing to its clogging.

“I will be meeting representatives of the industry on October 8. We have decided that even polluted water treated of its impurities will not be channelled back to rivers. It can be diverted, used for irrigation and other purposes but not sent back to rivers,” she said.
Bharti said as part of the initiatives to rejuvenate Ganga, plans are afoot to carry out afforestation on the banks  of the river. There is also a proposal to conserve medicinal plants in the upper reaches of the river.

Responding to a question on inter-linking of rivers, she said any step will be taken keeping in mind environmental laws, sentiments of the states involved and international protocols.

Her ministry said in a note that “renewed thrust” to inter-linking of rivers has been made. The Ken-Betwa link project between Madhya Pradesh and Uttar Pradesh would be the first interstate river linking project to be completed.

As the project would mean submergence of several hectares of land of the Panna Tiger Reserve, the Madhya Pradesh government has agreed to compensate the land so that the “territory of the tigers” is not compromised.

Asked whether the NDA government plans to bring water in the Concurrent list of Constitution, she virtually ruled out any such move saying “the Centre will take states into confidence on issues related to water.”

With water being a state subject, Centre often finds it difficult to to have a say in river interlinking projects and inter-state water sharing disputes. Such disputes are referred to a tribunal and take years to reach a resolution.

Against this backdrop, UPA government had supported bringing water in the Concurrent list of Constitution and had received support from a Parliamentary panel.

Responding to a question on failure on part of the Central Water Commission (CWC) to provide flood forecast to the Jammu and Kashmir government, Commission Chairman Ashwin Pandya said the body has largely concentrated on collecting hydrological data as part of  its international commitment to Pakistan under the Indus Waters Treaty.

He said the CWC is upgrading its systems to provide flood forecast from more centres.

He also said the Jammu and Kashmir received a month’s rain in four days leading to floods.

Review: Deliver Us From Evil