CM Rawat, reaching out and making himself accessible

Rawat is looking at a long tenure, with the next assembly elections due in 2017. 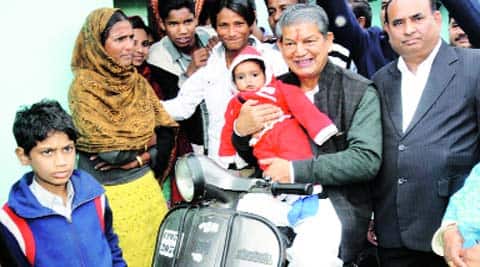 Rawat with citizens on one of his regular visits through town.

The day after he took oath as Uttarakhand’s chief minister, Harish Rawat went to his office but would not sit on his chair. This was apparently because his astrologers had advised him against it until Vasant Panchami. And when that came on February 4, priests reportedly performed puja and havan before he finally sat on the chair he had been eyeing for 12 years.

Rawat is looking at a long tenure, with the next assembly elections due in 2017, but knows he will be under constant pressure from three sides —the opposition, his party’s allies, and factions within the party.

The BJP has been playing on the slow pace of rehabilitation and reconstruction work in disaster-hit areas and is hoping that anti-incumbency will bring it all five constituencies in the upcoming Lok Sabha elections. Among allies, he has to deal with the Progressive Democratic Front formed by seven non-Congress MLAs (three of the BSP, three independent and one of the Uttarakhand Kranti Dal) on whose support his government banks.

It is the factions within the Congress, however, that Rawat has sought to woo first. In his very first week, he visited MLAs supposed to be his detractors at their homes, apparently to persuade them to put up a united face before the elections. It was to send such a message that he sent Navprabhat, a party MLA considered a loyalist of former chief minister Narayan Dutt Tiwari, to Kedar Valley before he went there himself.

“I met villagers at Tharali village for three hours before the chief minister arrived and then communicated their problems to him,” says Navprabhat. He was a minister under Tiwari, who had been chosen CM when Rawat too had been a contender. When Rawat arrived in the village, it was with minister Indira Hridyesh, another Tiwari loyalist, and whom Rawat introduced to his audience as “super CM”.

For his first press conference, Rawat chose the Congress office. Before that, he went to the home of state Congress president Yashpal Arya, a minister said to be among his detractors, and brought him along to the press conference.

And on Sunday, at another press conference, Rawat had with him Saket Bahuguna, son of Vijay Bahuguna whom he has replaced as chief minister. Rawat and Saket had come in the same flight from New Delhi.

Rawat has also sought to appear more accessible. The chief minister’s office is open to visitors, and he has visited villages and Dehradun’s slum areas every day in his first week. He has trimmed his carcade to two Innovas, and done away with his cover of Black Cat commandos.

To rush reconstruction and rehabilitation, a cabinet meeting Wednesday decided to delegate more financial powers to SDM-ranked officials on the ground. Time is running out with the panchayat elections set to bring the model code of conduct into effect.

“He wants road links, power stations and water pipelines restored within two months, so he has delegated more financial powers to SDMs to avoid procedural delay,” a government official said.

Rawat has also directed officials to hold regular camps to distribute compensation and given them a deadline until the end of this month, the official said.