Among other politicians who shared the stage with Kejriwal and Hazare were MDMK’s Vaiko and CPI national secretary Atul Anjan. 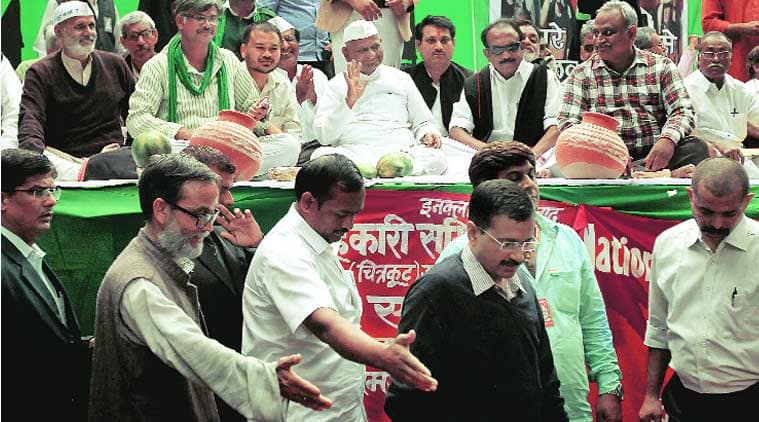 Two weeks after his party trounced the BJP and returned to power in Delhi, Chief Minister Arvind Kejriwal turned up at the Parliament Street Tuesday for a reunion with “guru” Anna Hazare to declare AAP support for the farmers’ protest against the land acquisition ordinance.

Acknowledging that his government had no control over land in Delhi, Kejriwal said he would not allow any “forcible acquisition”.

As in the run-up to the Delhi election, he continued to target the BJP and Congress: “The amendments brought by the NDA government to the land acquisition law are against farmers and the poor, and we will oppose them. Congress in their arrogance did scams and deprived the poor of their rights, they got punished.

“This government is making the same mistake of trying to become a property dealer of big industrialists. They squandered the Lok Sabha mandate with these actions, that is why people got rid of them in Delhi. If you run bulldozers on people, they will bulldoze you.”

At the protest site, Kejriwal was the star attraction. Though he first stayed away from the dais, he was pulled on to it. He called Hazare a “father figure” and asked him to spend ten minutes at the Delhi Secretariat on Wednesday to give a pep-talk to all heads of department. Sources close to Hazare said he was “considering” the offer.

The two had not shared the stage since they parted ways in September 2012 when Kejriwal announced his decision to launch a political party.

Hazare, meanwhile, announced that he would henceforth not sit on a fast as he wanted to “stay alive and serve the country, not die.” He said over the next four months, he would work on educating villagers on the “draconian nature” of the Act and how even the option of a disgruntled farmer approaching the courts would be subject to permission from the government.

He said there would also be a “jail bharo” movement from Ramlila Maidan in Delhi, minus the fasts.

Among other politicians who shared the stage with Kejriwal and Hazare were MDMK’s Vaiko and CPI national secretary Atul Anjan who is also general secretary of the All India Kisan Sabha.

Hazare had started by announcing that no political party could share the stage, only to be overruled by representatives of the 21 farmers’ organisations who had organised the rally. Then, explaining the presence of Kejriwal, he said, “This is to honour his designation of the CM of a state.”

Vaiko accused the Modi government of being “for, of and by the corporates”. “They have not learnt any lessons even after the tough message of Delhi elections. They need to understand that if they persist with this ordinance, people will throw them into the dustbin. Delhi has been purged of them, and soon the country too will be. People cannot be bulldozed,” he said.

Women’s organisations too turned out in strength. Former Delhi High Court chief justice Rajinder Sachar said no country had ever been able to push through a law that allowed land to be acquired against the will of the people. Yadav alleged that recent amendments moved by the Haryana government have actually halved compensation rates in that state.

The Ekta Parishad, which had also organised a four-day farmers’ march from Palwal, reached Parliament Street only after the day’s proceedings had come to an end.