Sunday's train accident is the latest in a line of tragedies to have hit the Indian railways. 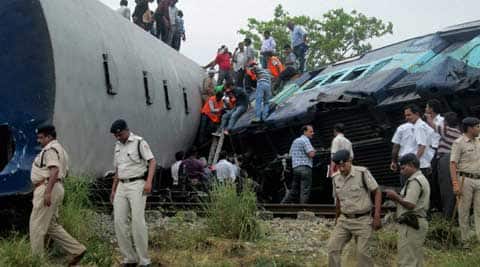 Railways witnessed another train tragedy on Wednesday after the Delhi-Dibrugarh Rajdhani Express derailed at Golden Ganj station near Chapra, killing four passengers and injuring eight others. As many as 12 coaches were derailed in the incident at around 0200 hours, Railways spokesperson Anil Saxena said.

Wednesday’s train accident is the latest in a line of tragedies to have hit the Indian railways. Following is the chronology of major train mishaps in recent years:

May 26, 2014: At least 22 people were killed when Gorakhdham Express rammed into a stationary freight train in Sant Kabir Nagar district in Uttar Pradesh. The accident took place when the express train came on the same track as the freight train near Churen Railway Station.

May 04, 2014: At least 18 people were killed and 124 injured after the engine and six bogies of a passenger train derailed in the Konkan Railway route in Raigad district of Maharashtra. The Diva-Sawantwadi passenger train, which left Diva at around 7:30 am, derailed shortly after crossing the Bhise Khind tunnel at around 9:30 am killing 18 passengers.

February 17, 2014: Three passengers were killed and 37 others injured when ten coaches of a train derailed at Ghoti near Igatpuri in Nashik district. The mishap took place at around 6.20 am when 12618 Nizamuddin-Ernakulam Lakshadweep Mangala Express train was passing through the Ghoti-Igatpuri section, about 35 kms from Nashik.

January 08, 2014: Four persons were charred and five died due to suffocation after three sleeper coaches S2, S3 and S4 of the Bandra Dehradun Express were gutted in fire. The incident occurred between Dahanu Road and Gholvad station near Surat. While the cause of the fire was yet to ascertained, senior railway officers ruled out short circuit.

December 28, 2013: Twenty six people, including two children, were killed and 12 others injured when a fire broke out in the AC 3-tier B-1 coach of the Bangalore-Nanded Express train at Kothacheruvu near Puttaparthi in Anantpur district of Andhra Pradesh. According to Railway officials who inspected the gutted coach, the area near berth 64, where the coachs power panel was located, did not seem to have been burnt. According to reports, the fire broke out at 3:10 am, when most of the 65 passengers were sleeping. Some managed to escape by breaking the window panes or running to the next coach. The train was stopped and the B-1 coach detached to stop the fire from spreading.

August 19: At least 37 pilgrims including women and children standing on rail tracks were killed when a speeding express train ploughed into them in Bihar’s Khagaria district. The ‘kanwarias’ (devotees of Lord Shiva) were on the tracks after alighting from the Samastipur-Saharsa passenger train when they were run over by the Saharsa-Patna Rajyarani Express travelling at 80 kmph.

June 30, 2012: Thirty-five passengers were charred to death and 25 others injured when a fire broke out due to a short circuit in a coach of the New Delhi-Chennai Tamil Nadu Express near Nellore in Andhra Pradesh. Thirty-two bodies were recovered from the charred S-11 bogie of the train. According to Nellore district officials, the fire was noticed by a gateman at around 4.15 A.M who alerted officials.

May 22: Twenty-five people were killed when the Banglore-bound Hampi Express collided with a stationary goods train in Andhra Pradesh’s Anantapur district.

January 11: Five persons were killed and nine others, including a child, injured in a collision between the Delhi-bound Brahmaputra Mail and a stationary goods train.

Nov 22, 2011: Seven people were burnt to death when the Howrah-Dehradun express caught fire in Giridih in Jharkhand.

May 22: Garibrath Express rammed a Bolero at an unmanned level crossing near Madhubani station killing 20.

May 28: At least 150 people were killed after Gyaneshwari Express was derailed by Naxals in West Midnapore district of West Bengal.

October 21: 23 persons were killed when Goa Express hit Mewad Express from behind near Mathura station killing 23.