Investigating agency NIA had last month arrested his wife but Alam had been on the run since the blast. 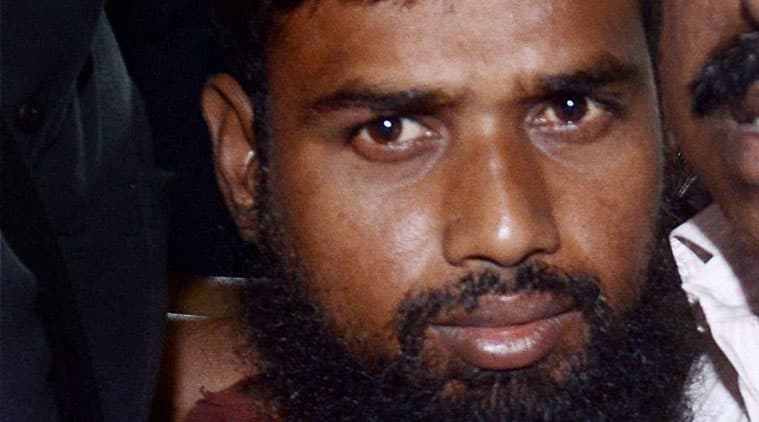 Hasan Molla, one of the accused in Burdwan blast, at CID headquarters in Kolkata on Tuesday. (Source: PTI Photo)

A day after Sahanur Alom (32), alias “doctor Ilias”, a top Jamaatul Mujahideen Bangladesh (JMB) operative was arrested in Nalbari district, the Assam Police on Saturday confirmed that several top JMB leaders from Bangladesh had visited at least one madrasa in the state and conducted some motivational training there.

“We have confirmed that some top JMB leaders had visited a madrasa in Larkuchi village in Nalbari and organized motivational training to induct boys from here in order to create JMB modules in Assam the way they did in West Bengal,” Assam Police DG Khagen Sarma said.

Formally announcing the arrest of Alom – who was among the 12 “most wanted” by the NIA in the Burdwan blast case – the Assam DGP also said that the police was on the look-out for five or six more persons having close links with the JMB. Sahanur Alom was arrested from Larkuchi village under Mukalmua police station in Nalbari district, and remanded in 14 days police custody by the CJM’s court here on Saturday.

“Several persons are under our surveillance as also some NGOs and madrasas. We have already arrested ten of them including the most-wanted Sahanur Alom. There are five or six more who are important. We are also looking for four women,” the DGP said. Sahanur’s wife Sujena Begum alias Suriya Bhano was arrested by the police on November 6 in Guwahati.

Sahanur Alom, who was carrying a cash reward of Rs 5 lakh announced by the NIA last month, was picked up from Larkuchi village by a team of the Assam Police on Friday after he had managed to remain elusive for over two months since the Burdwan blast of October 2.

“Sahanur had shifted from one place to another in lower Assam as well as Meghalaya and had even tried to sneak out to Bangladesh several times,” the DGP said, describing the arrest as a major success.

Sahanur Alom, whose name in the organization was Ilias, however was popularly known as “doctor” as he had undergone some para-medic training and was working in the villages as a quack dentist. Hailing from Chatala, a village under Sarthebari police station in Barpeta district, he has been involved with the JMB for over one year and half, DGP Sarma said.

“The best thing is that the local Muslim population has not given any indulgence to Sahanur and other JMB operatives. Local Muslims in fact chased them away in village Chaolpoka, and informed the police when he and some others tried to organize a namaz one day ahead of the scheduled Eid namaz in Chatala,” DGP Sarma said.

When asked whether the Jamaatul Mujahideen Bangladesh (JMB) was particularly eyeing pockets inhabited by people of Bangladesh origin, the Assam Police chief said the JMB had even targeted districts like Sivasagar in upper Assam where there are no infiltrators’ pockets. “While the JMB has motivated some people from a district like Sivasagar, some JMB leaders have even married Assamese girls from districts like Nalbari,” Sarma said.

‘Modi may be an agent of change, but he has to reshape an entire ocean’