Bihar polls 2015: Will decide whether to project CM candidate or not, says Rajnath Singh

Speaking about the prospects in Bihar, the Home Minister said there is a question of credibility about the alliance of the opposition parties comprising JD-U, RJD and Congress. 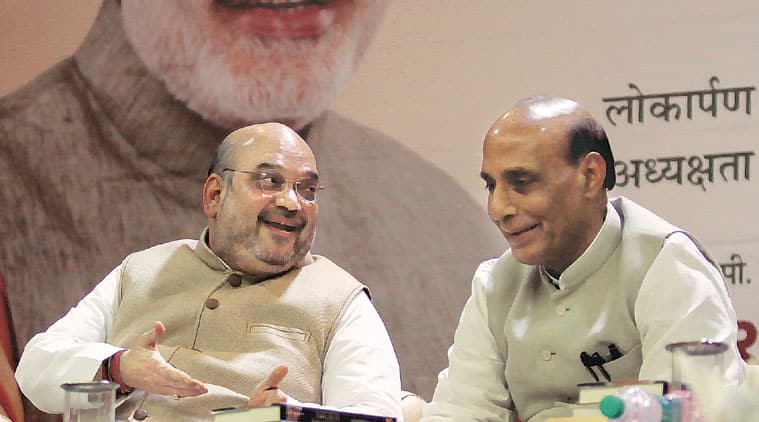 “Our Parliamentary Board will decide whether to project anyone as chief ministerial candidate or not,” BJP senior leader and Home Minister Rajnath Singh said. (Source: PTI file photo)

The BJP Parliamentary Board will soon take a decision on whether to project someone as chief ministerial candidate in poll-bound Bihar, senior party leader Rajnath Singh said today.

“Our Parliamentary Board will decide whether to project anyone as chief ministerial candidate or not,” he told PTI.

Asked about the number of seats which the party will contest, the Home Minister said discussions among the alliance partners were on and a final decision will be taken soon.

Speaking about the prospects in Bihar, the Home Minister said there is a question of credibility about the alliance of the opposition parties comprising JD-U, RJD and Congress.

“But we have a very credible alliance (of BJP, LJP, Majhi and others),” he said. The SP had recently walked ou of the grand alliance,
saying it felt “humiliated” after not being consulted by larger partners in the state over seat sharing.

SP leaders had said that Mulayam was not comfortable with being seen in the company of Congress, a rival in politics of Uttar Pradesh where JD(U) or RJD have hardly any stakes. Being seen with Congress president Sonia Gandhi at election rallies would not go down well with SP supporters, they had said.

SP was reportedly peeved at being allotted just 5 seats in the 243-member assembly by the major partners. SP, RJD, JD(U), JD(S), INLD and Samajwadi Janata Party–had in April this year announced a merger, which they had said, would be formalised after the Bihar elections.

The term of the 243-member Bihar Assembly comes to an end on November 29.

The Election Commission is likely to announce the schedule of the high-voltage Bihar Assembly polls in the next few days.

After ruling the state for ten years, Chief Minister Nitish Kumar is seeking a third term this time in alliance with RJD and Congress after he walked out of NDA in June, 2013 snapping 17-year-old ties with BJP.

BJP, which had almost swept the state in the Lok Sabha polls in alliance with Ram Vilas Paswan’s LJP and Upendra Kushwaha’s RLSP, is hoping to repeat its performance and slamming Kumar for aligning with Lalu Prasad, a convict in fodder scam case.

Britney Spears’ father urges her not to date?