Before their murder, we picked up the mentally ill and fed them: M Sevarkodiyan 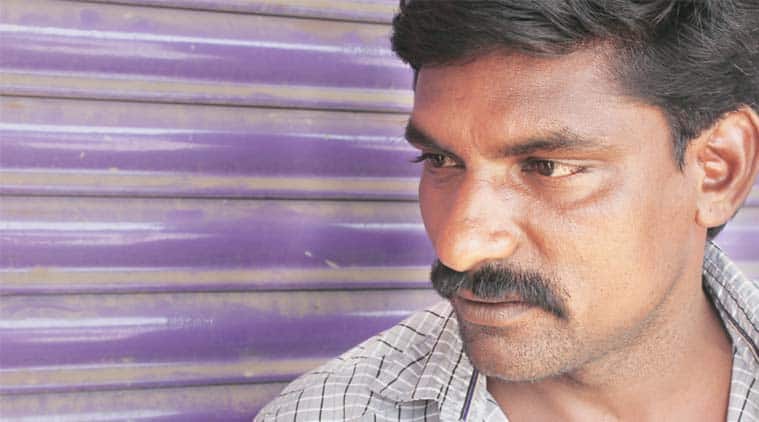 It was on Sevarkodiyan’s complaint that IAS officer U Sagayam, who heads a Madras High Court-appointed committee tasked to probe a granite mining scam, ordered digging at a quarry last weekend. (Express Photo by: Fazil N C)

In 1999, when he worked as a driver with PRP Granites in Madurai and made frequent trips to its quarries in Pudukkottai, Annavasal, Thogamalai, Sivakasi and Tuticorin, M Sevarkodiyan was given an unusual task. He was told to pick mentally ill people from the streets on the way back, feed them well and drop them at the company headquarters.

Seventeen years later, Sevarkodiyan is at the centre of a bizarre story of alleged human sacrifices in Tamil Nadu’s granite quarries.

He alleged that the mentally ill were killed and buried by mining baron P R Palanichamy’s associates each time PRP Granites, the country’s largest granite exporter, expanded business or razed local temples for mining operations — allegations rejected by Palanichamy’s lawyer but now the subject of an inquiry by Madurai police.

It was on Sevarkodiyan’s complaint that IAS officer U Sagayam, who heads a Madras High Court-appointed committee tasked to probe a granite mining scam, ordered digging at a quarry last weekend. Skeletal remains of four persons, including a child, were found at the site.

He alleged he was witness to the burial of two mentally ill persons he had picked from the streets. The throats of both, he claimed, had been slit.

“The PRP head office was in Keelavalavu near Madurai and they had quarries in other districts. Whenever we made an inspection trip, we were asked to pick up mentally ill people on the way. We didn’t have to force them to get into the vehicle. We simply had to hold their hands, and they would step inside the Jeep or Sumo,” Sevarkodiyan told The Indian Express.

“On the way, the first thing we did was to buy them good food, as much as they wanted. By the time we returned to Keelavalavu, it would be early morning. We would drop them outside a room at the headquarters. They would be locked there for several days,” he said.

It is alleged that at least 12 of these mentally-ill people, among them a woman, were “sacrificed” as part of a ritual each time PRP Granites expanded its empire.

Sevarkodiyan recalled the time he had to drive a company supervisor to a quarry near Manimuthar river after a water pump developed a snag.

“We had to cross the dry riverbed to reach the quarry site. While returning, a Jeep with a supervisor approached from the opposite direction. As we crossed, I saw bodies of two men in the rear of the Jeep. Their throats had been slit. They were the two I had picked from Annavasal more than a month ago,” he said.

He said he was slapped by the supervisor sitting next to him. “He asked me to stop the vehicle. He called in a bulldozer. The Jeep carrying the bodies stopped on the riverbed. Using the bulldozer, they buried the bodies at the spot. I watched from a distance. The other supervisor came up and told my supervisor to keep an eye on me. He said I would be buried in the same manner if I narrated the incident to anyone,” he said.

“There were times when we couldn’t find any mentally-ill person. Once I asked Palanichamy’s driver about the people being brought and kept in the room. He said the owner was helping them, rehabilitating them. He said such acts would bring him fortune,” Sevarkodiyan said.

He now fears for his life. “I may be attacked or killed. But I will stick to the truth.”

The police, meanwhile, have begun collecting details of persons reported missing from Annavasal during the period Sevarkodiyan mentioned.

But Sevarkodiyan said, “The graveyard they speak of is on the banks of the river while the spot I identified is on the riverbed,” he said.

Sevarkodiyan quit PRP Granites in 2003. The next year, he filed a police complaint about the burial of two bodies. “Within 30 minutes of the complaint, goons bundled me into a van and assaulted me.”

He said he approached Sagayam who had been named as head of the HC-appointed committee to probe the granite mining scam.

On September 12, Sagayam called Sevarkodiyan and asked him to join the exhumation process. When police said they would start the digging work the next morning, Sagayam decided to sleep at the site. He said he “feared destruction of evidence” since the site has already been identified and marked.

“They are spreading big lies about us. We demand a CBI inquiry into this. Sevarkodiyan has a problem with us because his father’s property was bought when he was a minor. Now, land prices have increased. He is probably trying to get his land back. Sagayam, who ordered this probe, was a very good officer in the beginning. But repeated transfers by the government have made him an officer who acts like a Naxalite against us. Palanichamy is a god-fearing man. Unlike rich people or politicians, he is not superstitious at all,” he said.