Obama invites Modi, will meet on September 30 at White House

Modi said he looks forward to a result-oriented visit in September. 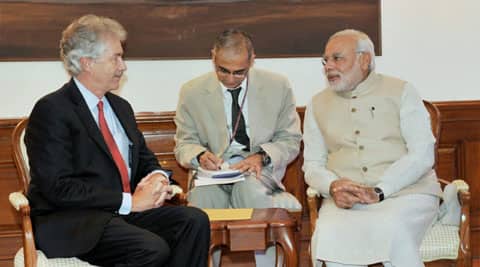 Hours after US Deputy Secretary of State William Burns on Friday delivered the formal invitation to Prime Minister Narendra Modi to visit Washington DC, sources told The Indian Express that Modi would meet President Barack Obama at the White House on September 30.

Modi will attend the UN General Assembly session in New York and then fly to Washington DC for the meeting with Obama, the sources said.

They said the US usually does not combine bilateral visits to Washington DC along with visiting leaders’ engagements in New York for the UNGA. But this time, they made an exception and went the “extra mile” to invite Modi to the White House after the UNGA session. A similar exception was made in September 2008 for the then prime minister Manmohan Singh, who met the then president George W Bush at the White House after his engagements at UNGA.

As he received Obama’s formal invite from Burns, Modi conveyed to him that he looked forward to a “result-oriented visit” with “concrete outcomes” that imparts “new momentum and energy” to the India-US strategic partnership.

In his letter, Obama reiterated his invitation — that first came in a phone conversation with Modi on May 16 — and resolved to work closely with Modi to make India-US relations “a defining partnership for the 21st Century”.

This warm exchange is being seen as a reset of the India-US relationship, which had hit a low over the episode relating to Indian diplomat Devyani Khobragade last December.

Modi, who was denied visa by the US in 2005 due to the Gujarat riots, said he was of the view that “re-energising the partnership between India and the US would send an important message to the region and beyond”.

Articulating his vision for India-US relations, he said the ties between the world’s oldest and largest democracies should not only be for the benefit of the two countries, but “should emerge as a powerful force of good for peace, stability and prosperity in the world”.

Burns conveyed Obama’s desire to strengthen economic relations, including in next-generation technologies and manufacturing sector; cooperate in enhancing energy security; deepen security cooperation, including in maritime security, counter-terrorism and intelligence exchange; expand consultation and coordination on Afghanistan; and work more broadly for security and prosperity in Asia. In a way, he outlined the areas on which the deliverable outcomes can be worked upon by the two sides in the next two months — in a bid to make some progress ahead of Modi’s maiden US visit as PM.

Modi said he saw immense opportunities for deepening cooperation and laid special emphasis on involving youth in creating new avenues of promoting cooperation between the two countries. He reiterated his desire to strengthen relations with all neighbours, reflecting his foreign policy direction evident from his invitation to heads of all SAARC countries for his swearing-in ceremony.

Ministry of External Affairs spokesperson Syed Akbaruddin said the meeting between Burns and the Indian leaders has initiated a process, in which “paths” are being chalked out, ahead of the PM’s visit to the US.