B E L…Belvedere, get it right… Rang Bhavan, next to St Xavier’s College: Callers told clueless PCR on 26/11

An analysis shows that at least 22 calls to the PCR between 11 pm & 1 am were about the location of the terrorists. 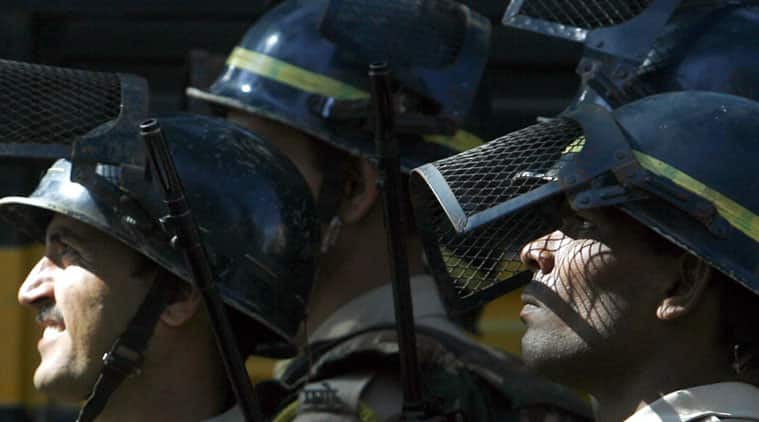 Doctor Amol Chavan had never seen an AK-47 assault rifle, certainly not inside a hospital. On the night of 26/11, from his hiding place on the first floor of Cama & Albless Hospital, he could see two men spraying bullets — one later turned out to be Ajmal Kasab. At 11.22 pm, Chavan called the Police Control Room. But operators kept transferring the call. He was not the only one alerting police.

The Indian Express has obtained and authenticated 4,396 phone calls made to the PCR, running into 89 hours of conversations.

An analysis shows that at least 22 calls to the PCR between 11 pm and 1 am were about the location of the terrorists. Doctors, staffers, residents of the High Rise Building, a phone operator at GT Hospital, a man whose wife had seen a watchman being gunned down, the wife of an IPS officer, two doctors holed up on the terrace of Cama Hospital — all but two called in with specific information.

First reported by Express: What went wrong; The inside story

But in a city gripped by fear and anger, PCR operators betrayed both panic and a surprising lack of awareness about its geography — they were unable to locate even the well-known Rang Bhavan. One operator sounded as if he had never heard of the open-air theatre despite the caller telling him it was next to St Xavier’s College.

Without a giant satellite map of the city, and appearing to be unfamiliar with its landmarks, men and women at the PCR struggled to make sense of locations or the route the terrorists were taking. 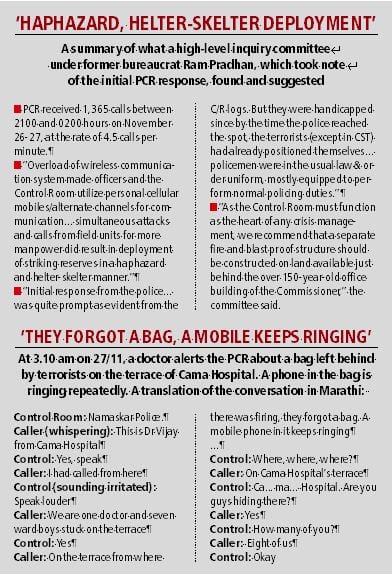 TWO GUNMEN ON THE LOOSE

There’s complete chaos: Colaba Market residents sound angry that the police haven’t reached even an hour after the firing and lobbing of grenades at Nariman House; from outside the Mumbai Port Trust colony, a man is spelling the Victorian alias of the road where a taxi and its driver have been blown up. “B.E L… Belvedere Street, get it right,” he says.

A woman operator has picked up a new tragedy, a fire at the Oberoi hotel. Near Nariman House, residents of Mehta Building report cracks in their building from the grenade explosions. At CST, a police constable’s younger brother is hiding inside a room — he is a railway police constable, unarmed, and has just seen a woman take a bullet.

Just before midnight: Dr Vijay calls from Cama Hospital to say he can see two men, carrying backpacks, one wearing a black jacket and holding a gun. “I can see your policemen downstairs, but I can’t yell for help.” He says the police are facing the road. “They need to know that the terrorists are inside the building.” Operator Bhonsale asks for the name of the building, then remembers that police vehicles are already deployed outside Cama Hospital. Don’t send vehicles, Dr Vijay says, asking instead for armed men to be sent to the “pink coloured building” inside the Cama Hospital complex. “Ask them to come safely towards the second floor.”

Midnight: Panic spreads to the suburbs. One caller demands that the Taj President be combed, other callers take random Muslim names as possible suspects. The two gunmen are still in the Cama Hospital complex. A resident of the staff quarters says one man is dead on the ground floor — dead with “just a single bullet”, says the caller. Foreigners are calling from the higher floors at the Trident. They are asked to stay in the rooms.

00.08: Operator Sunil Bagul takes a call describing the attackers in one of the hotels. “They are in fashionable trendy T-shirts, with backpacks, four boys aged not more than 25. They don’t look different and easily merged with the crowd at the entrance. My friend is in the hotel and he says he can see them now on the third floor.” Bagul asks if the men are bearded.

00.30: A caller from the High Rise Building — it’s the name of a multi-storey staff quarters, next to GT Hospital — says two men are standing at the gate. The operator asks for a landmark. The caller repeatedly says Rang Bhavan, and then gives other landmarks: “next to St Xavier’s College”, the former open-air theatre. But a minute and seven seconds of detailing every landmark around Rang Bhavan yields nothing. Operator Yadav does not know what or where Rang Bhavan is. Operators also confuse Gokuldas Tejpal (GT) Hospital and Cama & Albless Hospital, some assuming them to be the same.

00.35: At GT Hospital, doctors can see a police vehicle with a beacon, its door open, in Rang Bhavan lane. They heard firing ten minutes ago, when two men came out of the vehicle and opened fire. They don’t know if the men were policemen or terrorists. The vehicle is still there, beacon now switched off, in the lane between St Xavier’s College and the Mumbai Police Commissionerate.
On a parallel line, a caller says two gunmen are trying to break open cars parked outside Rang Bhavan. Again, the operator asks for landmarks to map Rang Bhavan.

00.38: A caller asks if information given earlier about two gunmen near GT Hospital has been shared with assault teams. Operators say yes.

00.39: Jagtap, a telephone operator from GT Hospital, is on the line. He says two men have walked in the gates with guns, and that the watchman of the adjoining High Rise Building has been killed. Operator Valke finally figures where GT Hospital is. Seconds later, the Air Force station near Metro Cinema reports a “passing firing”. The PCR says: “Action chalu hai (Action under way).”

‘THEY WON’T HAVE TO GO TO SCHOOL’

00.42: One caller is very specific. He says two terrorists fired at a man outside the Corporation Bank ATM and is now hiding in the shrubs.

00.43: One phone line is taken off the hook. For an hour and 59 minutes, operators can be heard speaking of commando training while frantic orders to wireless vans are heard in the background.

00.44: An eyewitness calls to say he saw gunmen pull out bodies of two policemen from the vehicle. The operator says a team has been sent, the caller corrects him to say the gunmen were hiding when a police team went past. Another caller on a parallel line has the same information, but the operator disconnects the line.

00.45: The operator disconnects. The line stays off the hook for an hour and 43 minutes.

00.47: A second Marine Street resident calls to say there was firing from a moving vehicle that went past Metro Cinema.

00.57: A security officer calls to say a Qualis sped past Vidhan Bhavan and firing was heard.

01.02: An operator opens his tiffin box. Somebody has fish for dinner, another has bhakri. In a 26-minute dinner conversation, caught through three phone lines kept off the hook, the men can be heard trying to laugh at the prospect of walking their children to school the next day. One corrects: They won’t have to now.

01.03: Officer Raorane can be heard on one phone line. He is calling from St George Hospital. He wants the terrorists killed. “Maaji do maanse meli ahe. Te sutle naahi pahije (Two of my men have died, the terrorists better not get away).”

Letters to the editor: Far from the truth