Road links have been snapped in eight districts of Arunachal, leaving several administrative circles faced with a shortage of essential items including foodgrains.

On the way to school in Balimukh village of Morigaon district in Assam on Thursday, rowing across what used to be a paddy field. (Source: Reuters photo)

Rains in the Eastern Himalayas and the Assam valley over the past one week have cut Arunachal Pradesh off the rest of the country and left the Brahmaputra and its tributaries flowing above the danger mark in several parts of Assam. More rains are forecast over the next few days.

Road links have been snapped in eight districts of Arunachal, leaving several administrative circles faced with a shortage of essential items including foodgrains.

“Though it is only the beginning of the monsoon, the situation is already very bad. Most of the border townships and circle headquarters in Longding, Tirap, Changlang, Anjaw, Dibang Valley, Upper Siang, West Siang and Upper Subansiri districts have been cut off by landslides,” said Bamang Felix, government spokesperson.

Itanagar, the capital, has been almost totally cut off. “The main National Highway connecting Itanagar to Bandardewa (Assam) has been blocked at Karsinga for nearly a week. The alternative road to Gohpur too has been snapped at several points. Itanagar is now connected only through a village road to Assam,” Felix said. 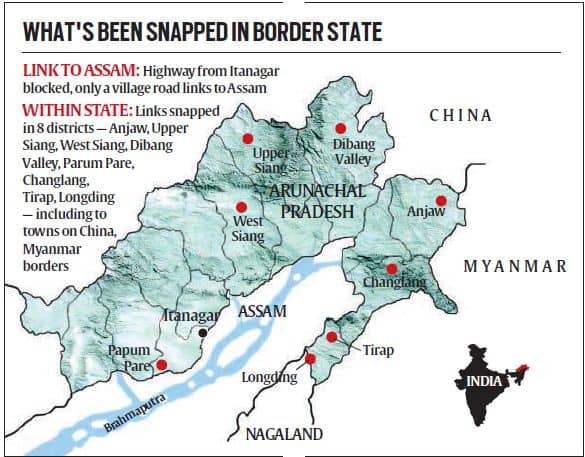 In Anjaw, one of 10 districts that share a boundary with China, deputy commissioner Nyabin Ete said, “We are in a helpless situation. A bridge has been washed away between Hawai and Wallong, cutting off two vital Army positions at Wallong and Kibithu (near the border).” Ete said he trekked several kilometres on Thursday to return to Hayuliang after he was stuck on the road.

In Upper Siang, through which the river Tsangpo enters India to become the Brahmaputra, five of the eight administrative circles are cut off. “Luckily, we had stocked enough foodgrains before the rains began,” DC Remo Kamki said.

In Tirap, landslides have cut off Laju, an administrative circle on the Myanmar border, for more than 10 days. “The Border Roads Task Force had only a month ago cleared a major landslide between Khonsa and Laju. Last week, another landslide almost wiped out the road near Puntong village. This has also disrupted movement of troops to the border areas where operations are on against the NSCN-K,” said an official in Tirap.

The situation has improved slightly in East Siang during the past two days with road links restored, said DC Nidhi Srivastava, but “electricity to many places remains suspended as landslides have uprooted poles”.