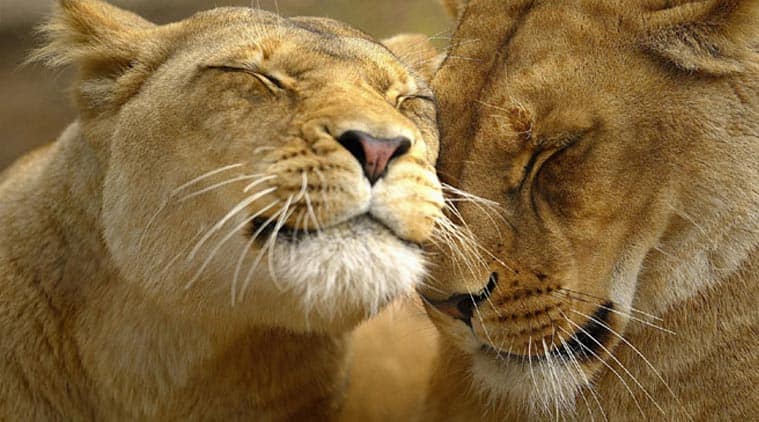 Even as the Supreme Court of Indian has ordered trans location of endangered Asiatic lions from Gir forest in Gujarat to Madhya Pradesh in best interest of species, the population of the Jungle King has gone up from 411 in year 2010 to 523 in the year 2015.

According to results of the 14th lion census, there are 523 Asiatic lions in Gir forest, other protected areas and revenue areas in Junagadh, Gir Somnath, Amreli and Bhavnagar districts of Saurashtra region of Gujarat. This means the population has increased by 112 as compared to the figure of 411 counted in 2010.

According to 2015 census, there are 109 male, 201 female and 213 sub-adult (lion cubs below the age of three years) lions in the wilderness of these four districts.

These numbers were 97, 162 and 152 respectively in year 2010. This is the only wild population of Asiatic lions in the world and International Union for Conservation of Nature (IUCN), a world body working for conservation of nature and wildlife has categorised the species as endagered.

The CM said 268 lions were counted in Junagadh district while 44 were there in neighbouring Gir Somnath. Similarly, 174 lions were counted in Amreli district while 37 others were spotted in Bhavnagar. In 2010, these numbers were 270 for undivided Junagadh district, 108 in Amreli and 33 in Bhavnagar. Thus Amreli has recorded the highest growth in lion population.

The CM said lions are pride of Gujarat and that Gujarat has not just ensured conservation of the big cats but has also created environment in which its population is growing.

“Till the time we do not take care of environment, which includes jungles, streams, wild animals, birds etc, we cannod claim to have made progress. Increase in lion population is result of collective efforts of all the government departments. But a lot of credit goes to maldharis (cattle-herders) of Gir who have treated this top predator as their family member. We have secured open farm wells which were proving fatal for lions.

Our lions are world famous and are our pride. We have not just conserved them but has created an environment in which their population is increasing,” CM said while announcing the results.

She also made mention of Make in India logo of lion. “By chosing lion as the logo of Make in India initiative, Prime Minister Narendra Modi has sent a message to the world that we are peace-loving people but can roar like a lion if need be,” the CM said.

The 14th lion census was conducted from May 2 to May 5. The exercise covered eight districts and an area of 22,000 square kilometres (sq km). The 2010 census covered an area of 10000 sq km and the CM said the increase in range of lions was encouraging.

Incidentally, the Supreme Court had rejected the argument of Gujarat goverment that lions were pride of the state and family members of local people.

The court had ordered trans-location of the big cats in 2013 to Kuno-Palpur Sanctuary in Madhya Pradesh observing that creating an alternative population of Asiatic lions was in the best interest of the species as its only subpopulation in Gujarat could face trouble in face of natural calamities or disease.