Arif, an engineering student, was one of the four men from Thane who were believed to have joined Islamic State in Iraq and Syria. 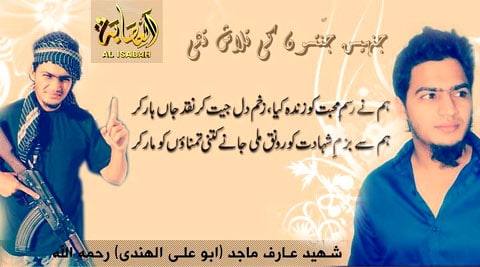 In the Ansar al-Tawhid eulogy, addressed to “those who are searching for paradise”, Arif is shown dressed in an Arab kaffiyeh, holding an assault rifle. The image, the first of Arif from the battlefield, was posted online on Twitter accounts and online fora linked to the Ansar ul-Tawhid.

The picture identifies Arif by a nom de guerre, describing him as “Shaheed Arif Majeed (Abu Ali al-Hindi) Rahmat Allah [may God’s mercy be upon him]”.

The Urdu-language poetic tribute says: “We gave meaning to the ritual of love [for God], though it hurt our hearts and cost us our lives; our sacrifice adds glory to the assembly of martyrs, attained after sacrificing many dreams.”

Arif was one of four youths in their 20s from the same neighbourhood of Maharashtra’s Thane district who were believed to have joined the Islamic State (formerly the Islamic State in Iraq and Syria, or ISIS), the Islamist group that has conquered large parts of Syria and Iraq.

The Ansar ul-Tawhid has been the most active of Indian jihadi groups online, posting videos of its cadres training in Pakistan’s North Waziristan and in southern Afghanistan. In recent weeks, the organisation has released Tamil, Hindi and Urdu translations of ISIS leader Ibrahim Awwad al-Badri’s claims of being the caliph of all Muslims.

Intelligence sources in New Delhi told The Indian Express that the picture on the eulogy bears out speculation that the Thane men had made contact with the Ansar ul-Tawhid, a hardline faction that broke with the Indian Mujahideen (IM), and whose cadres are now believed to be training with jihadists in the Afghanistan-Pakistan borderlands.

Searches of computers seized by investigators from the homes of the youths have indicated that they often visited forums linked to the IM and the Ansar ul-Tawhid, the sources said. However, it remained unclear whether the men had made contact with the Ansar ul-Tawhid before or after leaving for Iraq.

A Facebook account believed to have belonged to Arif Majeed has a flag of the Islamic State on its profile page, posters propounding the caliphate, and pictures that suggest the ummah has been asleep even as the community bleeds. The last post was on March 27, quoting one Abu Walid: “All those clothes in your cupboard and you don’t get to choose what to wear in the grave.”

Dr Ejaz Badruddin Majeed, Arif’s father, declined to comment on the appearance of his son’s picture on a jihadi forum. Close friends of the family said on Friday, “We have lost our son. What bigger loss could we have faced? It is a closed chapter for us now.”

Earlier this month, Ansar ul-Tawhid posted on its Twitter handle a tribute to Anwer Bhatkal, a distant relative of alleged Indian Mujahideen founder Riyaz Bhatkal, who it said had “attained martyrdom” in the Afghan jihad.

The organisation’s websites and online discussion boards have carried several appeals to Indian Muslims to join the Islamic State in Syria, urging them to train for an eventual insurgency in India.

In recent weeks, the Ansar ul-Tawhid has carried several texts and videos on the Islamic State’s ideology and military campaign, translated into Indian languages. Intelligence officials believe the organisation’s campaign, electrified by the Islamic State’s success against militarily superior forces, sees it as a patron of future jihadist operations in India.

The Indian Express has through July and August been the first to publish a series of reports on the Kalyan men, the killing of Anwer Bhatkal, the operational plans of the Ansar ul-Tawhid, and the shadowy lines that seem to connect the Indian Mujahideen with jihadis in Afghanistan and the Middle East.