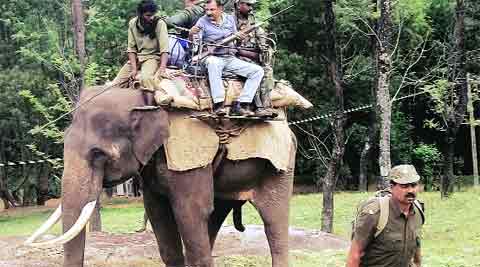 Forest officials patrol the area on an elephant. Express

Camera traps, cages, elephant patrols and audio recordings of mating calls — the Tamil Nadu forest officials are trying everything possible to capture a tiger that has killed three people in the Nilgiris district so far.

Its first victim was Kavitha, 33, who lived near the forest area. Kavitha went missing on the evening of January 4. The next day, her partially-eaten body was found inside the forest.

Three days later, on January 7, Chinnappan, 58, was found dead in the area.

But what changed the mood of the villagers from fear to panic was the last killing, on January 8. Muthulakshmi, 38, was attacked when she was returning home with other workers. The tiger leapt from the bushes and dragged her inside the forest, even as her co-workers made loud noises to scare the animal away.

Following this attack, the district administration shut down as many as 45 schools located near the forest area as a safety measure. The Doddabetta park, a popular tourist destination in the district, has also been closed until further notice.

“We have advised people to move in bigger groups and be cautious while working in the tea estates,” said District Collector P Shankar. Public address systems and leaflets are being used to communicate with the villagers.

While forest officials had begun tracking the animal soon after the first incident, the second and third killings have increased the urgency of their efforts. Images captured by camera traps have confirmed that it is a tiger.

Watch towers are in place to sight the animal and six cages have been kept ready. Expert shooters with tranquiliser guns are patrolling the forest on three trained elephants, while sniffer dogs have also been roped in. Forest officials are also trying to lure the tiger by playing audio recordings of mating calls.

“It is an extremely difficult terrain, making it tough to track the tiger or flush it out. It is not easy for the animal either. The fragmentation of its habitat due to human encroachment has made it difficult for it to get out of the 20-25 sq km forest area where it is trapped right now,” said Chief Wildlife Warden Lakshmi Narayan.