People have been advised to stay indoors to stay safe. The Coast Guard has warned fishermen against venturing into the sea. 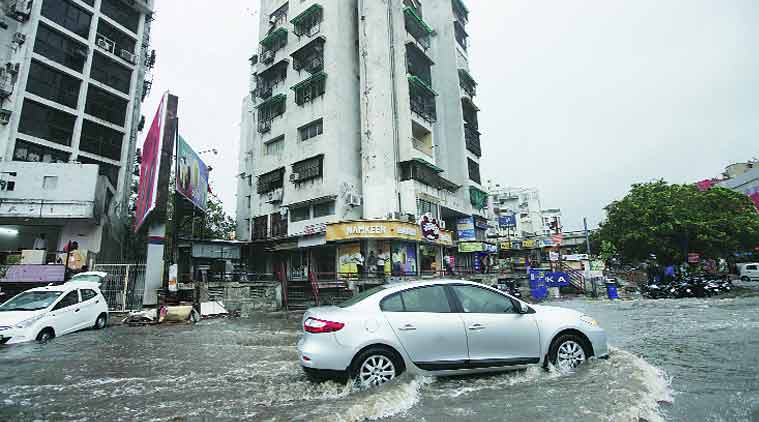 At least 35 people reportedly died and hundreds were stranded as heavy rain, caused by a deep depression in the Arabian Sea, lashed Saurashtra and south Gujarat on Wednesday.

While Amreli was the worst affected district, major cities Ahmedabad, Surat, Rajkot and Bhavnagar were also severely hit by the incessant showers. So far, more than 4,000 people from Saurashtra and around 550 from south Gujarat have been evacuated to safer locations.

The highest rainfall — 25.44 inches — was recorded at Bagasara in Amreli that alone witnessed 23 deaths. Dhari, which is located close to the Gir forests, home to Asiatic lions, received 20.44-inches rainfall.

According to Water Supply Minister Vijay Rupani, who reached Amreli in the evening to monitor the situation, while 13 people were killed after two houses collapsed at Juna Vaghaniya village in Bagasara, 10 died in other rain-related incidents in the district.

Over 50,000 food packets were distributed in Amreli region and over 30 villages have been reportedly cut-off from the rest of Gujarat. NDRF and IAF teams have been pressed into service in the district to carry relief and rescue operations.

Five died in Bhavnagar, three in south Gujarat region, one in Bharuch and two in Surat. A girl reportedly drowned in a flooded underpass at Mithakhali in Ahmedabad.

To avoid further casualties, keeping in view the Indian Meteorological Department (IMD) forecast of heavy to extremely heavy rainfall and strong wind up to 55 kmph till Friday, all schools in Surat, Bhavnagar, Rajkot and Ahmedabad have been asked to remain closed for Thursday. People have been advised to stay indoors to stay safe. The Coast Guard has warned fishermen against venturing into the sea.

Chief Minister Anandiben Patel held a high-level meeting at her Gandhinagar residence and asked the in-charge ministers to rush to their respective flood affected regions to oversee rescue operations.

During the meeting, Patel also took stock of the situation from all district collectors through video conferencing, a press release stated.

Arrogance of Speaker is dangerous for democracy: Om Prakash Sharma