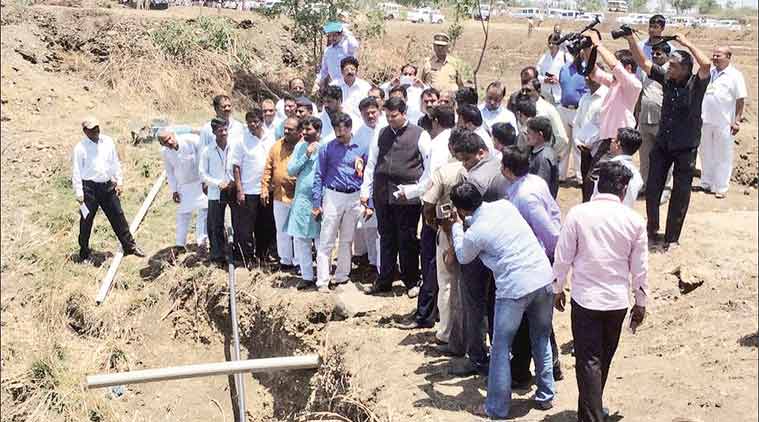 A government project aimed at mitigating Maharashtra’s water crisis has become virtually turned into a mass movement with residents of over 6,000 villages contributing nearly Rs 200 crore to the effort.

It is a project that has won the grudging appreciation of the opposition Congress, led to proprietary claims from the NCP and seen the participation of a smaller opposition party, Peasants and Workers Party. The government, for its part, has been publicising the project online.

Jalyukta Shivar Yogna aims to make 25,000 villages drought-free in phases with the help of low-budget, water conservation projects ranging from Rs 20,000 to Rs 20 crore. Of 40,000 villages in Maharashtra, 25,000 have been hit by drought for three consecutive years. Launched by Chief Minister Devendra Fadnavis four months ago, the project has so far seen 93,447 water conservation works completed in 6,202 villages in the divisions of Nashik, Amaravati, Nagpur, Pune, Konkan and Aurangabad.

Its standout feature is the contributions from the public. “The overwhelming response along with their enthusiasm for the work is an eye-opener for the government. People in the villages have started taking up the projects in terms of physical support and also raising funds,” Fadnavis said.

In Hogti of South Solapur, for instance, villagers with district officials took up the construction of a small cement canal and raised Rs 39 lakh in a few days. The project has helped irrigate 500 hectares. In Karanja of Washim, Mahesh Patil said, “ The severity of drought and hailstorms has united the people. It does not require huge funds; it is within the reach of the people.” And in Satara, fruit cultivator Prakash Kachre said, “We will build our own assets, so what’s the harm in lending support?”

Water conservation expert Rajendra Singh is among those who have appreciated the effort. “The government has begun the good initiative of small projects, but they should ensure the ongoing water conservation works remain people-driven and are not dominated by contractors in coming years.”

A water conservation official said the projects are being customised to local needs. “Each area has its own problems, so we cannot suggest the same work. The work can involve desilting of soil, deepening and widening of rivers and tributaries, digging new ponds, or construction of small cement nullas, bunds and canals.” At some places, abandoned structures are being revived.

From the opposition, Ganpatrao Deshmukh of the Peasants and Workers Party is leading the work in Sangola taluka, perennially affected by drought. “The people are no longer leaving it to the administration to tackle drought. This is heartening and also result-oriented,” he said.

Former Congress minister for water conservation Nitin Raut acknowledged this government has scored. “I was the only one in the Congress-NCP who always talked about water conservation projects, but unfortunately we never gave the department as much significance as is being done by this government. It was only towards the end that we started realising its importance. Also,” he added, “water resources was held by NCP ministers, so we had our limitations.”

NCP chief Sunil Tatkare said, “Dam construction by our government was only done after consulting experts and as per the state’s requirement. Along with that, conservation of water too was a must. It is not as if we did nothing in the last 15 years.”

“We are not driven by a big-dams policy,” Fadnavis said. “Instead, we are promoting small budgets, small projects which will stand for long terms and benefit the masses.”

BJP MLA Sanjay Kute from Akola (Vidarbha) predicts that “60 villages where the work is complete will be free of a water crisis after the monsoon”. And former MLA Pasha Patel said, “In Latur, villages are competing with one another to get ahead in the work. I have never seen such enthusiasm from the public.”