India on rights: quest to be better applies to all

The exchange took place over a few hours -- Blinken made the remarks at a roundtable meeting with civil society leaders and at the joint media interaction. 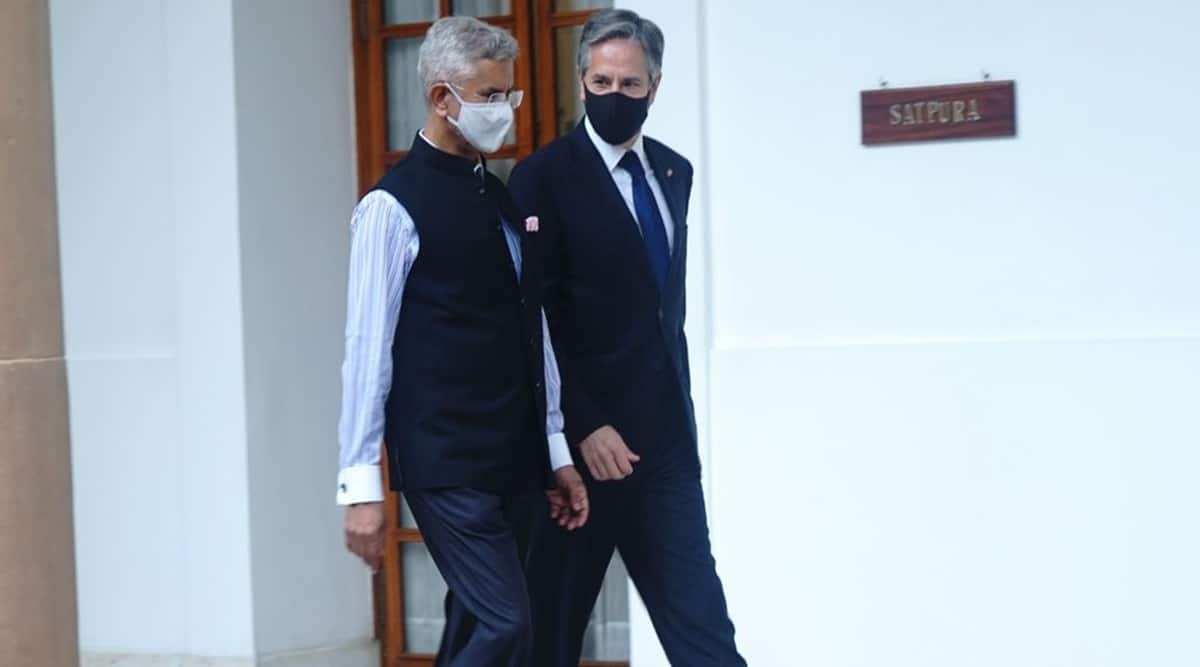 India AND the US Wednesday made their positions clear on the issue of rights and “international freedoms”, with visiting US Secretary of State Antony J Blinken saying that the promise of democracy includes striving constantly to “form a more perfect Union” — and External Affairs Minister S Jaishankar pointing out that the quest is applicable to all.

Without mentioning Kashmir or the new citizenship laws, Jaishankar also said that it is the “moral obligation of all polities to really right (the) wrongs”, including the historical ones, and that the Government’s decisions and policies are aimed in that direction.

Blinken, meanwhile, referred to a “democratic recession” and said that “at a time of rising global threats to democracy and international freedoms”, it is vital that India and the US as two leading democracies “continue to stand together in support of these ideals”.

The exchange took place over a few hours — Blinken made the remarks at a roundtable meeting with civil society leaders and at the joint media interaction.

Significantly, Blinken also met with two Tibetan leaders in Delhi. He held a meeting with a senior representative of Tibetan spiritual leader the Dalai Lama in a clear signal to China. In the meeting, Ngodup Dongchung, who is also an official in the Tibetan government-in-exile, thanked Blinken for the continued support by the US to the Tibetan movement.

Bilnken also met with Tibetan representative Geshe Dorjee Damdul, who was among a group of seven leaders from different faiths and communities that met the US Secretary of State.

On the issue of human rights, Blinken’s tone was on the lines expected from a senior Cabinet rank official of a Democrat administration in the US. Responding to questions, he said: “Our bilateral relationship is strengthened by our shared values. As two of the world’s leading democracies, we take seriously our responsibilities to deliver freedom, equality and opportunity to all of our people. And we know that we must constantly do more on these fronts, and neither of us has achieved the ideals that we set for ourselves. Part of the promise of democracy is the constant striving for better, as America’s founders put it, to form a more perfect Union.”

Blinken said: “We seek to strengthen our democratic institutions, expand access to justice and opportunity, stand up for those values at the heart of our democratic systems.”

Jaishankar was quick to respond: “I think I would sum it up from my perspective — I made three important points. One, that the quest for a more perfect union, applies as much to the Indian democracy as it does to the American, indeed to all democracies.”

He said: “It is the moral obligation of all polities to really right wrongs, when they have been done, including historically and many of the decisions and policies, you have seen in the last few years, fall in that category.” And, the Minister said, “freedoms are important, we all value them, but never equate freedom with non-governance or lack of governance or poor governance. They are two completely different things.”

Earlier, addressing civil society leaders in his first event after arrival, Blinken said US and India share a commitment to democratic values and it is part of the bedrock of the bilateral relationship. The civil society representatives included lawyer Menaka Guruswamy, Inter-Faith Harmony Foundation of India’s Khwaja Iftikhar Ahmed and representatives of the Ramakrishna Mission, as well as Baha’i, Sikh and Christian voluntary organisations.

Blinken said: “…doing the hard work of strengthening democracy and making our ideals real is often challenging. We know that firsthand in the United States, where we aspire to be, in the words of our founders, a more perfect Union. That’s an acknowledgement from day one of our country that in a sense we will always fall short of the mark, but that the way to make progress is by constantly trying to achieve those ideals,” he said.

Sometimes that process is “painful, sometimes it’s ugly”, but the strength of democracy is to embrace it, he said. “At the same time, we celebrate our achievements. Here in India, that includes the free media, independent courts, a vibrant and free and fair electoral system — the largest expression of free political will by citizens anywhere in the world,” he said.

Ahmed, one of the civil society leaders, told The Indian Express: “I welcome the fact that Blinken attached importance to the dialogue with the civil society…interfaith harmony is the need of the hour…unfortunately, it is not being given the priority it deserves.”