With backing of ISI, Jaish-e-Muhammad rises like a phoenix in Pakistan

In 2010, a Jaish-affiliated publication said the trust was paying pensions to the families of at least 850 jihadists killed or imprisoned in India, as well as in other countries. 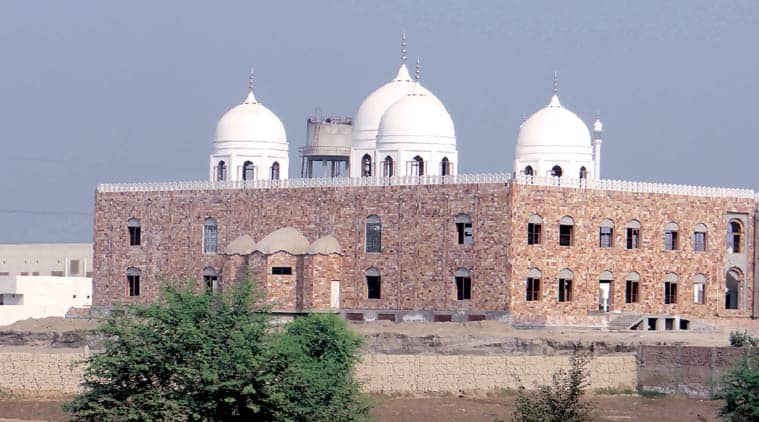 Hundreds gathered this New Year’s Eve at a seminary in Dera Ismail Khan, on the west bank of the Indus, to spend the evening listening to disquisitions on the life of the Prophet Muhammad. There was a student debate on the lessons of the Quranic-era battle of Uhud, and eulogies for jihadists from the city who had been killed in Kashmir.

Then, a videotape of the event shows, the Jaish-e-Muhammad jihad commander whose men were just then making their way across the Punjab border to attack the Pathankot airbase, delivered a mocking promise.

“People threatening to snatch away jihad from us can’t even snatch away your wooden toothbrush,” said Abdul Rauf Azhar, the military chief of the Jaish, and brother to Maulana Masood Azhar.

For more than five years, intelligence services across the world have warily watched the rebirth of the Jaish-e-Muhammad — documented in video, audio and published material obtained by The Indian Express.

Large meetings, like the one held in Dera Ismail Khan, have allowed the organisation to raise funds for a lavish new 16-acre headquarters in Bahawalpur, charitable operations, and military training camps. Estimates by India’s intelligence services show the Jaish may now have upwards of 500 trained jihadists at its disposal.

“This is potentially the biggest danger to India after the Lashkar-e-Toiba”, a senior Indian intelligence official said. “The big difference is that the Lashkar is being watched by the world, and the Jaish isn’t.”

Little noticed by the world, the Jaish has grown into one of the largest jihadist organisations in Pakistan. The foundation of its growth is hard cash. In 2010, the organisation put jihad veteran Maulana Ghulam Murtaza in charge of reviving the al-Rahmat trust, once run by Allah Baksh, the Azhar brothers’ father. The trust began soliciting funds in Pakistan and the Gulf monarchies, to build 313 mosques and seminaries.

In 2010, a Jaish-affiliated publication said the trust was paying pensions to the families of at least 850 jihadists killed or imprisoned in India, as well as in other countries.

Though some countries have proscribed al-Rahmat — the United States, in November 2010, imposed sanctions calling it the “operational front” for the Jaish, and the United Arab Emirates has followed — it continues to operate through publicly-advertised bank accounts in Pakistan.

In addition, Pakistan’s government has issued legal permissions for Jaish-related publications to print, and to solicit advertisements. The weekly magazine al-Qalam — in which, Pakistani counter-terrorism officials say Masood Azhar publishes under the pen-name ‘Saadi’ — is openly sold, along with the daily Islam and weekly Zarb-e-Momin, dedicated to glorifying Taliban violence.

Pakistan had begun shutting down the Jaish in 2003, in part in response to Indian and US pressure, brought to bear after its role in the attack on Parliament House in New Delhi was revealed. The growing fissure between General Pervez Musharraf’s military regime and the Islamists, though, was key: following two assassination attempts on Musharraf carried out by Jaish associates, the army came down hard.

The US and UK had their own concerns, with growing evidence emerging of links between international jihadists and the Jaish. Rashid Rauf, who attempted to bomb a transatlantic flight, and the perpetrators of the London underground attacks, had passed through Jaish terror camps.

In the years that the Jaish was proscribed, though, the Pakistan army came to believe Musharraf’s pro-US policies had only empowered jihadists — not a few of them breakaways from the Jaish itself. Efforts were made, notably, to win over Maulana Abdul Jabbar, a Jaish operative who had set up a breakaway faction linked to al-Qaeda after the 2003 crackdown. These, along with the Lashkar, were trusted, loyal jihadists.

Testifying before the official inquiry into the attack which claimed Osama bin Laden’s life, former ISI chief Lieutenant-General Shuja Pasha lashed out at Musharraf for caving in “promptly and so completely to the United States demands that Shamsi airbase was given to them for drone strikes against people in Pakistan”.

His thinking was widely shared within the ISI. In 2009, jihadists took 49 hostages in an attack on the Pakistan army’s headquarters in Rawalpindi. The ISI needed negotiators whom both they and the attackers trusted. Military aircraft were despatched to pick up top jihadist leaders — among them Abdul Rauf Azhar.

Masood Azhar, Indian intelligence officials believe, is also valued for his old links with the Taliban. Nizamuddin Shamzai, who taught Masood Azhar and then created his organisation after his release in 1999, was sent by then ISI chief Lt Gen Mahmud Ahmed to convince the Taliban to give up Osama bin Laden after 9/11. Shamzai reportedly ended up persuading Taliban chief Mullah Muhammad Omar to fight, instead.

His brother, Ibrahim, fought in Afghanistan as a teenager, and then persuaded the Taliban to give jobs there to his sister, Rabiya.

In 1999, Rauf Azhar and Ibrahim are believed to have visited the Taliban on several occasions, as they stitched together the plot to hijack Indian Airlines IC814 — which would lead to Masood Azhar’s release, after five years in jail.

“There’s no coincidence to the fact that the attack on the consulate in Mazar-i-Sharif took place at the same time as Pathankot”, says one Indian diplomat. “Someone was making a point.”

Tapes with The Indian Express show what that point is. At one February 2013 event, dozens of women linked to the organisation’s women’s wing gathered in Bahawalpur to hear Rauf Azhar praise Afzal Guru, the Kashmir resident hanged in 2013 for his role in the Parliament attack. Rauf vowed vengeance on India at the event, as he invited the women to read Guru’s posthumously-released book, which extols armed jihad and suicide attacks.

Last year, Masood Azhar himself addressed a rally in Muzaffarabad held in Guru’s memory, to push forward his point.

In Mazar-e-Sharif, the attackers left behind messages saying their act was intended to avenge Guru’s hanging. Three men carjacked by the assault team which hit Pathankot heard the same message.

The Jaish, interestingly, was allowed to vocally support Bin Laden after his death — in defiance of stated Pakistani policy against the fugitive jihadist. In one eulogy, Masood Azhar described him as “our brother, a Muslim, the pride of the Arabs”. Rauf was even more explicit, attacking Pakistan’s political leadership for allowing a man “who gave his whole life for Islam to be martyred in Pakistan”.

“The Americans have spilt Osama bin Laden’s blood”, Rauf warned, “and they will pay for it”.

Watch Video: How Wires Got Crossed in Delhi

Large parts of the Jaish leadership’s speeches, interestingly, make the case for jihad worldwide — not just against India. In a 2014 speech, Five Conspiracies Against Jihad, Masood Azhar railed against rulers afraid to take on the West. “There are some afraid their number is coming up, like Afghanistan’s number came, and then Iraq’s number. Thus, a terrible hopelessness and fear has descended on the whole Muslim community.”

Following last year’s attacks in Paris, Masood Azhar’s pseudonymous column in al-Qalam warned the West: “If you spray bombs, do you think the children of Medina will shower petals on you?”

Pakistan itself is a frequent target. In an August 2015 column, he assailed Pakistan’s government for “arresting Mujahideen for collecting contributions”. “They are of the view” that if financial channels of the Mujahideen are blocked, their jihad and religion would die.” The rulers, he wrote, were “infidels and hypocrites”.

The Gift of Virtue, Azhar’s third book, casts the struggle for Kashmir’s independence from India in much the same terms as Bin Laden did against the West. Indian rule, he argues, compromises the sovereignty over a land which they ought to rule. The struggle is also an existential one, he goes on, as Islam could be extinguished unless it enjoys political dominance across the world.

“The idea,” says a senior Indian intelligence officer, “seems to be to allow the Jaish to tap the same sentiments that is drawing so many in Punjab to groups like the Islamic State or other anti-Pakistan jihadists — and then turn their guns outward, towards Afghanistan and India”.