We were taken, told to confess, allege relatives of SIMI activist 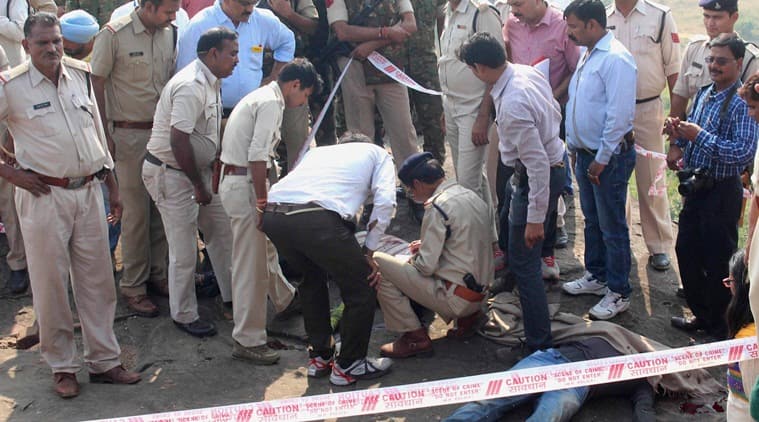 Bhopal: Police investigate the encounter site at the hillocks of Acharpura village after the STF killed 8 Students of Islamic Movement of India (SIMI) activists who escaped Central Jail killing a security guard in Bhopal on Monday. PTI Photo (PTI10_31_2016_000209A)

A day after eight alleged SIMI operatives were killed in an alleged encounter, bodies of five who came from Khandwa were buried at Bada cemetery here on Tuesday night. The five — Amjad Khan, Zakir Hussain, Mohammad Salik, Sheikh Mehboob and Akeel Khilji — had escaped from Bhopal Central Jail in the early hours of Wednesday after allegedly killing a prison guard.

WATCH VIDEO: Here’s Why Bhopal SIMI Jailbreak Could Be An Insider’s Job

On Wednesday, advocate Javed Chouhan, lawyer for four of the slain suspects from Khandwa, said they are yet to receive the postmortem reports from police. “They should be with us in two days. We have video-recorded the bodies before burial – to ensure we can submit the video in case of apprehension that the autopsy reports are tampered with,” Chouhan said.

On Wednesday, relatives of two slain operatives claimed that hours before the encounter they were “blindfolded and handcuffed” early Monday morning and taken to an undisclosed location near Indore, and asked to make allegedly false confessions.

Mohammed Jaleel, 22, son of Akeel Khilji, claimed that “plainclothed men” came to their house around 4.30 am and asked him to join them. He claimed he was not told about the jailbreak, or why he was being detained. “I was blindfolded, handcuffed and put into a car. I was neither allowed to speak with my lawyer nor produced before a magistrate,” he claimed.

Jaleel claimed he was detained for nearly 10 hours. “At 10.30 pm, I was informed about my father’s encounter killing, and was asked to leave…to perform the last rites,” he claimed. According to Jaleel, he was repeatedly questioned what “ek baari usko use karna, usko fek dena, aur darna mat (use it once, then discard it, and don’t be afraid)” meant. “They said this was some code words I had apparently used when I met my father in jail…. I have never said anything like this,” he claimed. “Why should I say what they want me to say?”

Mehmood Feroze, 28, a scrap dealer and brother-in-law of another deceased, Amjad Khan, claimed that he was also “picked up, blindfolded and handcuffed” after morning prayers and taken to an “undisclosed” location. “They were men from the ATS (Anti-Terrorism Squad),” he claimed. “They only said I am a sympathiser of Amjad, and that is why they were detaining me.”

Feroze said he had met Amjad in jail about a month-and-half ago. “They said I had transferred hatyaar (weapon)” to Amjad during that meeting, Feroze said, and vehemently denied the accusation. According to relatives, Feroze was released when they mounted pressure that Amjad’s body would be buried only after he was released.

Civic report finds 228 cases of dengue, 21 of chikungunya in October