With most small and marginal farmers in Marathwada having witnessed four consecutive crop failures, the narrative of the drought has moved out of the fields. 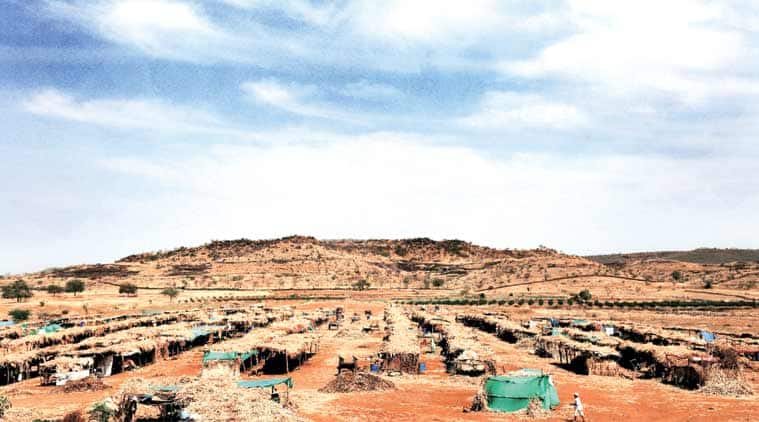 THERE ARE 1,400 animals at the cattle camp in Wanzarwadi, a hamlet near Dhamangaon in Ashti taluka, Beed. According to Ghanshyam Ram Pondhe, 12, Rani is the best of these, always docile, never shuffling around as he sits down to milk the three-year-old cow. Having spent longer days at the camp over the last two months, returning home only to sleep, Rani is his favourite ‘person’ in the world right now.

“I wake up, milk Rani, wash up, sell the 10-12 litres at the milk market and then go to school, cycling,” he says. The Class VI student says his father, Ram, works at a forging unit in Ashti, about 12 km away. He took the job after consecutive crops failed on their one-acre land. “Aai (mum) would work too, if she got something.”

Some of his school friends are at the camp, listening as men spend their afternoons complaining about no work, empty fields and a credit tap wound tightly close. In fact, as Marathwada’s summer rages on amid an unprecedented water scarcity, more and more gatherings take place in the fodder camps. For this is where villagers now congregate, to avail free fodder and water for animals, their last remaining asset after three droughts in four years. There are now over 2,75,000 animals in 297 camps in Latur, Beed and Osmanabad, the worst-hit districts.

With most small and marginal farmers in Marathwada having witnessed four consecutive crop failures, the narrative of the drought has moved out of the fields. “There is nothing at home, so I spend the entire day here. There’s nothing to do but stare at animals, and fall into exhausted sleep when it’s too hot. But what’s there to do at home?” asks Naseemabi Shaikh, 50, at the Kasari cattle camp just outside Ashti town. With 20 mouths to feed and no water in her village wells, she finds it easier to live in the camp, going home to cook a meal that she packs a small portion of for herself, to eat with her 12 animals. “At least there’s water here, keeping the animals alive will give me milk to sell.”

In Nandurghat village of Kaij taluka, villagers have brought to cattle camps everything from clotheslines to battery-operated water-coolers, utensils, gunny bags of clothes and extra bedding for the aged. “Toilet? We just sit by the roadside at the back of the camp,” says Vijobai Hange, 48. Her back aches from crouching all day in a temporary tent fashioned out of saris and poles. And from walking — to home and back daily, 3 km one way. She leaves her animals behind in the camp at night, in the care of a neighbour.

Where animals remain an asset to care for, the villages empty out in the mornings as people leave for the cattle camps or to find work in towns. Elsewhere, where villagers have even smaller land holdings or traditionally eke out a living as landless labourers, officials admit there are no surveys conducted but distress migration is apparent on a large scale.

Approaching Bedarwadi, about 20 km from Ashti, it’s pitch dark at 7 pm. The village has had no electricity for a week, but nobody knows why. Silhouettes of 30-odd children bobbing in excitement at the visitors is sign that the village is here. “Only old people are left here, and children,” says Mangal Bodre. The 60-year-old is cooking dinner for a grandson left behind with her — his six-year-old sister has gone to the cane fields with her parents while a brother, aged 11, is living with an uncle elsewhere. “At least one boy is well cared for. I was sick last year and they spent Rs 8,000 on the hospital stay. Now my husband has chest pain and we don’t know what to do.”

Of the 550-600 strong male population, 400 have “gone to Belapur”. Belapur is an overarching term to describe the location of any sugar factory anywhere in the state, where the men have migrated for the four-month sugarcane cutting season.

Everybody is bitter. Naseemabi says she visits nobody, attends no functions and talks to nobody outside the cattle camp. Bodre says there is nobody to take care of her if she falls ill now, no way to repay loans they took for her hospitalisation, nothing she believes her grandson can look forward to in the near future.

Local BJP leader Vijay Golwar says, “This region always bucked the trend of suicides in Vidarbha, because we have been traditionally habituated to dealing with cracked fields and arid landscapes. Golwar says Marathwada’s season of suicides is on account of people not having a chance to heal before the next tragedy. He adds, “Now, in village after village, Marathwada’s people are dependent on government dole and waiting for more.” But it’s Chandrabha, widow of Kalyan Khomne who killed himself last June in Nandurghat village in Kaij, who puts it succinctly: “I realise why he did it. Because I know now that every struggle is more desperate than the last, every failed crop dragging us down a little further.”