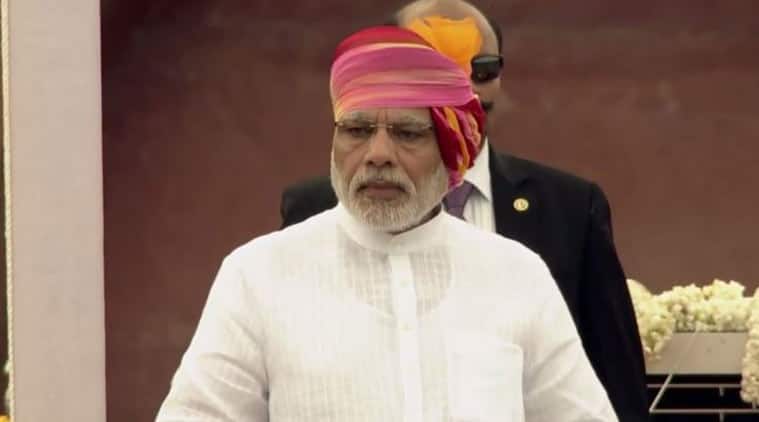 Prime Minister Narendra Modi addressing the nation from the ramparts of Red Fort.

Prime Minister Narendra Modi hoisted the national flag at the ramparts of Red Fort for the third time as India celebrates its 70th Independence Day on Monday. Heavy security arrangements were put in place for the grand celebrations. Prime Minister Narendra Modi highlighted his government’s achievements over the last two years and also took the opportunity to reiterate the government’s stand against violence and terrorism.

The two announcements that Prime Minister Modi made in his speech were an increase of 20 per cent in the pension of freedom fighters and that the government will bear Rs 1 lakh medical costs for poor families.
Over the last few days, the Prime Minister’s Office had invited suggestions from all citizens for the themes and issues he needs to address in his speech. People were asked to send in their inputs through the MyGov website and app.

11.00 am: In Jammu and Kashmir, Chief Minister Mehbooba Mufti said the situation in the state should be resolved at the earliest that the entire national leadership from Jawaharlal Nehru’s time till today, were responsible for the situation.

“Who is responsible for this? What can I do when despite having IIMs, IITs, students who have to study have gone blind. I promise that action will be taken against police & security forces who went against my directions. Encounter have taken place in past and will continue to take place. But I don’t understand what was my Govt’s fault?”

10.40 am: Finance Minister Arun Jaitley unfurling the national flag at his official residence

Congratulations & best wishes to fellow citizens on the occasion of 70th Independence Day of our country.Jai Hind. pic.twitter.com/wqahRAPplM

10.05 am: Congress leader Salman Khurshid criticised PM Modi’s address saying it sounded more like an election speech than one for the nation. “Deeply disappointed by PM’s speech today, he gave an election speech,must rise above party politics.”

10.00 am: Congress vice-president Rahul Gandhi unfurls the national flag at the Congress Party headquarters in New Delhi. Congress president Sonia Gandhi is recuperating after she fell ill during a rally in Varanasi.

9.20 am: BSF and Pak rangers exchange sweets at the border

9.10 am: PM Modi announced that the Government of India will bear Rs 1 lakh medical expenses for poor families. He also announced a 20 per cent increase in pension of freedom fighters.

9.07 am: With chants of Bharat Mata Ki Jai, Vande Mataram and Jai Hind, the Prime Minister concluded his speech.

9.02 am: The Prime Minister also thanked the people of Balochistan, Gilgit and PoK. “They have thanked me a lot in past few days, I am grateful to them.”

Modi also spoke about the terror attack in Peshawar saying there were tears in Parliament over the senseless killings. “This is the example of our humanitarian approach, but there are some countries who glorify terrorists,” he said, hitting out at Pakistan.

8.56 am: Unity in diversity, this is our strength. Violence has no place in our society, PM Modi said. “Despite diversity, our unity has sustained because of our values… This country will not yield to terrorism and extremism,” Modi said, adding: “the youth who have taken up guns, I urge them to return to their parents, shun violence”.

8.55 am: Have delivered on OROP promise, says PM Modi. “OROP was hanging for a long time, we took it head on. More than 35000 jawans have lost their lives fighting at border so that we can stay peacefully here, how can we forget them. Therefore my government tried to resolve the long standing issue of OROP.” 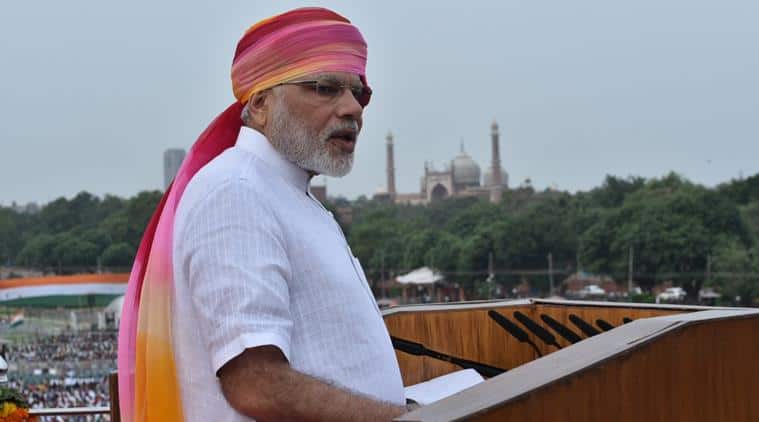 Prime Minister Narendra Modi during his address from the ramparts of Red Fort. Image: PIB

8.45 am: PM Modi touches upon social unity. In his address, he said, “great leaders like Mahatma Gandhi, Ambedkar ji have always stressed on the need for social unity. Yes there are problems, but we have to rise above and fight such anti-social elements. Only then we’ll be able to progress in the real sense. Only financial growth is not important, social unity is also important. 125 cr people of India are part of one family. An empowered India is not possible without an empowered society.”

8.42 am: “Amidst global economic slow-down, Indian economy is growing,” PM Modi said, adding that the GST, which has been passed by both houses of Parliament and now awaits clearance from state assemblies, will give strength to our economy. The Prime Minister said all parties are to be thanked for its passage. “One nation, one grid and one price- we have worked on this.”

8.38 am: Modi also touched on the coal scam, saying his government has ensured there’s no corruption in the auction process. “There used to be allegations on coal block auctions. We all know about coal scam. However, we auctioned coal online, without any corruption charges levelled against us due to transparency. Today it is completely transparent. The nation has benefited,” Modi claimed.

8.30 am: “Reform, perform, transform, we have made efforts in every sector. We are trying to revive ‘post-offices’ in the country which is becoming irrelevant increasingly due to advent of technology,” Modi said, claiming that his government has revived sectors such as BSNL which has been failing across the world. For the first time, shipping corporation and BSNL have gained operational profit because of our government. The emphasis, Modi said, was on revival of 118 stuck projects worth Rs 7.5 lakh crore.

8.20 am: On the farmer crisis, PM Modi said: “If farmers in the country got adequate water, they can turn ‘soil’ into ‘gold’. That’s why my government has given importance to save water. We have given impetus to ‘per drop, more crop’ initiative. Sowing of pulses has increased 1.5 times this year, it will help solve problem of demand shortfall,” he added, thanking this year’s abundant monsoon. “My dream is to double the income of farmers by 2022, and this dream will materialise.”

8.14 am: PM Modi paid tribute to Guru Gobind Singh in his address. He also said that the nation could not forget the contributions of Sikh Gurus. “How can we forget the bravery and sacrifice of the Sikh Gurus.”

8.10 am: Prime Minister Narendra Modi said his government has ensured inflation rates do not cross six per cent and that the Reserve Bank of India is doing its best to control price rise. “Due to drought situation in the last two years, government has faced challenges in terms of price rise. We have done our best to control price rise in the country,” Modi said, adding that he would not let the poor of the country suffer.

7. 36 am: PM Modi begins his address to the nation. Speaking from the ramparts, PM Modi said: “Today on this special day, I convey my greetings to 125 crore Indians and the Indian community living overseas. May this energy guide the nation to scale newer heights of progress in the years to come.

We remember Mahatma Gandhi, Sardar Patel, Pandit Nehru, countless people who sacrificed their lives so that we attained Swarajya.”

PM Modi said that as India enters its 70th year of Independence, “India’s age is not 70 years, but the journey post colonial rule for a better India is 70.”

Yes, we face several problems. But we are capable to overcome them. The onus is on 125 cr people of India to convert this ‘Swaraj’ into ‘Surajya’, the Prime Minister said, adding that India faces a lot of challenges, today but I believe that 125 crore people of India have the ability to face and overcome these challenges.

March from self-governance to good-governance is a resolve of entire nation, it will need sacrifices. Panchayat se Parliament aur gram pradhan se lekar PM tak, sabko apni zimmedari samajhne ki zarurat hai (From panchayats to Parliament and sarpanch to Prime MInister, everyone has to know their responsibilities).

Today, more than Karya, I want to talk about Karya Sanskriti on the Government. Surajya, the meaning of this is- a qualitative and positive change in the lives of the citizen of India. ‘Surajya’ means a government should be sensitive towards the common man, weaker sections.

PM Modi also said that while it was easy to keep account of the work done by the government, but it is difficult to have in-depth knowledge of those initiatives. Modi also said the government is keen on changing the impression that people have of Income Tax officers, where people are scared of income tax authorities, particularly among middle class families. I want to change the lives of common people, I am committed to it. He also spoke about how technology has changed the way services are delivered to people. “Today, getting a passport takes only couple weeks, earlier it used to take months. There were tedious process and one needed strong references. We have changed this. Now one can avail passport in a week, have eased processes.”

“There was a time when the government was shrouded by allegations but now the govt is surrounded by expectations,” PM Modi said.

On the government’s ambitious Aadhaar scheme, Modi said the government has now connected 70 crore Indians through Aadhaar and social security schemes. Modi also said that in the last 60 weeks, the government has given four crore new connections of cooking gas to people. “In last 60 years, 14 crore were given gas connections,while my Govt provided gas connections to over 4 crore people in just 60 weeks.” He also spoke about the construction of rural roads that he says have now increased to 100 kms a day from 70-75 km a day.

On sanitation, Modi said: “In my first speech I had asked how can there be such a huge problem of sanitation in our country. We are working to bring in social change, over 70,000 villages are free from open-defecation today.”

On power, Modi said laying of power transmission lines increased to 50,000 km in a year from 30,000-35,000-km earlier. “Electricity has reached 10,000 villages out of 18,000 un-electricified villages. The LED bulb that was priced at Rs 350 each, is now being sold at Rs 50 each,” Modi said, urging people to buy LED bulbs and save electricity. When 77 crore LED lights are used in the country, India can up to save 20 MW energy.

7.25 am: Former prime minister Manmohan Singh has arrived at Red Fort for the ceremony. Also present are Speaker of Lok Sabha Sumitra Mahajan and several other dignitaries – from India and abroad.

7.20 am: PM Modi takes salute at the Red Fort, he will now inspect the Guard of Honour.

7.05 am: Prime Minister Modi pays tributes to Mahatma Gandhi at Rajghat. He is now expected to leave for Red Fort

Also Read: Why was August 15 chosen as Independence Day?

6. 50 am: Post his address to the nation at Red Fort, Prime Minister Narendra Modi will go to Sarangpur, Gujarat to pay his last respects to HH Pramukh Swami Maharaj.

Prime Minister Modi took to Twitter to greet the nation on its 70th Independence Day. He will shortly address the nation from the ramparts of Red Fort.