UP man beaten to death in Vapi, migrant workers clash with cops

The traffic was jammed as thousands of people, mainly auto rickshaw drivers and other migrants living in the area, gathered on the bridge and protested against the police not arresting those accused involved in the murder. 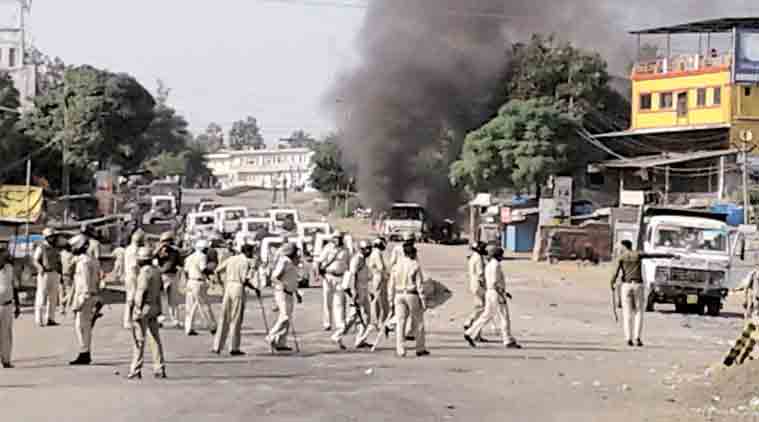 The clash in Vapi taluka on Tuesday.

A protest by a group of migrant workers turned violent in Vapi taluka of Valsad district Tuesday. They were agitating against the alleged lynching of an autorickshaw driver, a migrant from Uttar Pradesh, and demanding immediate arrest of all assailants.

The protesters set vehicles ablaze, including three police vans and jeeps, and clashed with police for nearly three hours. The police lobbed 34 tear gas shells to disperse the crowd.

The migrant autorickshaw driver was allegedly lynched by two local youths on Friday. The group of migrants, mostly autorickshaw drivers, blocked traffic on a bridge connecting Vapi and the Union Territory of Silvassa by placing the auto driver’s body on the bridge for nearly two hours.

The incident happened Friday evening when Prakash Patel and his friend Vikram Patel, both residents of Vapi taluka, were returning home. Their bike hit a child on the road. The child’s father Suresh Tiwari (25), an autorickshaw driver, and his sister Asha chided the youths. An altercation ensued between the two parties. The youths allegedly called other youths and thrashed Tiwari and his sister with wooden sticks and then fled.

The injured siblings were rushed to a hospital. While Asha was discharged, Suresh’s condition was stated to be critical. Tiwari’s son suffered minor injuries.

A complaint in this connection was lodged with Dungri police station by Asha against Vikram, Prakash and others.