In March this year, a delegation of USCIRF officials planned to visit India but they were not issued visas by the Indian government. The USCIRF was earlier denied visas in 2001 and 2009. 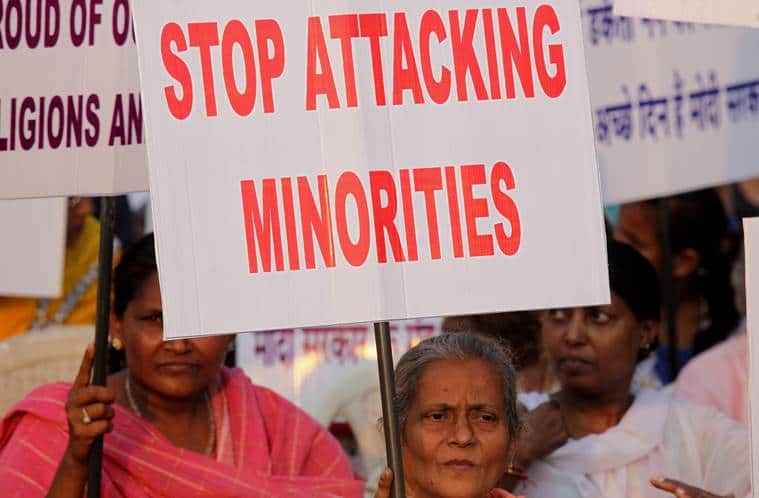 A woman holds up a placard during a rally organised by a Christian organisation at Azad Maidan, Mumbai. Express Photo/Prashant Nadkar

India on Tuesday refused to take cognizance of the annual religious freedom report by the USCIRF, questioning the commission’s locus standi to pronounce on the Indian state and its citizens fundamental rights.

“Our attention has been drawn to the recent report by the US Commission on International Religious Freedom (USCIRF), which once again fails to show proper understanding of India, its constitution and its society,” Spokesperson in the Ministry of External Affairs Vikas Swarup told journalists in New Delhi.

“India is a vibrant pluralistic society founded on strong democratic principles. The Indian Constitution guarantees fundamental rights to all its citizens including the right to freedom of religion. The government does not see the locus standi of a foreign entity like USCIRF to pronounce on the state of Indian citizens’ constitutionally protected rights. We take no cognizance of their report,” he added.

In its annual report, the USCIRF – an independent, bipartisan federal commission – was highly critical of the two-year Narendra Modi government, claiming that minority communities in the country experienced incidents of violence at the hands of right-wing fundamentalist groups.

The report, which comes weeks ahead of Prime Minister Modi’s visit to Washington, is not binding on the US State Department.

Minority religious leaders and laity, including from the Muslim, Christian, and Sikh communities, and non-government organizations (NGOs), attribute India’s recent decline in religious freedom and communal harmony to religiously-divisive campaigning in advance of the country’s 2014 general election and the BJP’s victory in that election.

Referring to the ban on cow slaughter, the report said:

“Article 48 of the Indian constitution and most Indian states (24 out of 29, as of 2015) significantly restrict or ban cow slaughter, which is required for Muslims during Eid al-Adha (Festival of the Sacrifice). The application of these provisions also economically marginalises Muslims and Dalits (who adhere to various religious faiths); many members of these communities work in the beef industry, including slaughter for consumption, hauling items, and producing leather goods.”

The report also referred to the September 2015 murder of Mohammad Akhlaq in Dadri over rumours that he had eaten beef.

“Members of the BJP and RSS have stoked religious tensions by claiming that Muslim population growth is an attempt to diminish the Hindu majority. For example, high-ranking BJP parliamentarians, such as Yogi Adityanath and Sakshi Maharaj, reportedly called for laws to control the Muslim population,” the report states.

“In April 2015, the Ministry of Home Affairs revoked the licenses of nearly 9,000 charitable organizations. The Ministry stated that the revocations were for non-compliance with the Act’s reporting requirements, but numerous religious and non-religious NGOs claimed that they were in retaliation for highlighting the government’s poor record on human trafficking, labor conditions, religious freedom and other human rights, environmental, and food issues. Among the affected organizations were Christian NGOs that receive money from foreign co-religionists to build or fund schools, orphanages, and churches, and human rights activists and their funders.”

President Obama’s remarks during his 2015 visit to India also found mention in the report.

“During his 2015 visit, and again in February 2015 at the US National Prayer Breakfast, President Obama made notable remarks on India’s religious freedom concerns. In his speech at a town hall event in New Delhi, and again a few weeks later at the Prayer Breakfast, President Obama underscored the importance of religious freedom to India’s success, urging the country not to be ‘splintered along the lines of religious faith’ and stated that India is a place where ‘…religious faiths of all types have, on occasion, been targeted by other people of faith, simply due to their heritage and their beliefs -acts of intolerance that would have shocked [Mahatma] Gandhiji, the person who helped to liberate that nation.'”

The report also had recommendations for the United States government, wherein, among others it recommended that the Indian government be pressed to allow USCIRF to visit the country, urging the United Nations Special Rapporteur on Religious Freedom or Belief to visit India.

In March this year, a delegation of USCIRF officials planned to visit India but they were not issued visas by the Indian government. The USCIRF was earlier denied visas in 2001 and 2009.

The Commission is headed by Dr Robert P George, McCormick Professor of Jurisprudence at Princeton University, and has among its chairmen Dr M Zuhdi Jasser, and Eric P Schwartz.