The CID also arrested four policemen, including former police inspector of the Una police station, for negligence, wrong reporting and taking a case that wasn’t in their jurisdiction. 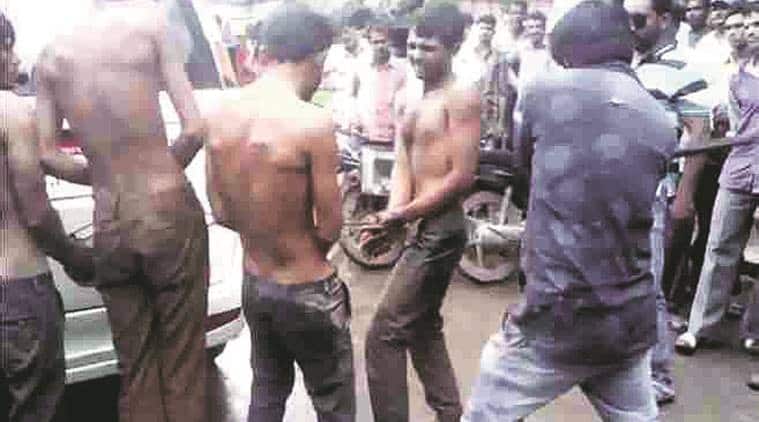 The chargesheet annexes the report of the forensic analysis on the carcass which confirmed the presence of “hair of the Asiatic lion” to prove that the cow was killed by a lion — a version backed by witness testimonies.

The Gujarat Criminal Investigation Department (CID) has accused local policemen of fudging facts in the case related to the July 11 flogging of Dalits in Una. Its chargesheet, filed Wednesday against 34 accused, alleged that police twisted the skinning of a dead cow by Dalits into a case of “beef being found”.

The CID also arrested four policemen, including former police inspector of the Una police station, for negligence, wrong reporting and taking a case that wasn’t in their jurisdiction.

The chargesheet annexes the report of the forensic analysis on the carcass which confirmed the presence of “hair of the Asiatic lion” to prove that the cow was killed by a lion — a version backed by witness testimonies.

According to the chargesheet, the CID found that when the four Dalit youths from Mota Samadhiyala village were forcibly “taken” into custody by the accused, a group of villagers had come to their rescue but had to return after the accused threatened them. These villagers called the police control rooms in Gandhinagar and Ahmedabad.

“The state control room (Gandhinagar) diverted the call to Una police station officer (PSO) saying that some youths were being beaten up.
However, the local police didn’t act for nearly four hours after registering the information in their logbook. Later, they added a line that ‘cow meat was found’ and thus fudged the information,” Inspector General of Police (CID) Shashikant Trivedi, who is leading the probe, told The Indian Express.

“The control room sent the report around 1.30 pm to Una police station. Our investigation found that the PSO added the line about beef being found around 9.30 pm, when his shift was ending. The CID found this in the log data as taped conversations from calls made to the number 100, by the victims’ relatives seeking help,” said a source.

The chargesheet notes the severity of the crime in which the Dalit youths were assaulted by a gang of 40 “Gau Rakshaks” for a crime they did not commit, how they were tied to a vehicle, stripped and flogged publicly. The assault was filmed and the video circulated.

The CID notes that the outrage caused by the viral video led to “74 incidents of rioting causing the death of one policeman…23 suicide attempts of which one died.”

The Indian Express had first reported a witness statement about the cow being killed by an Asiatic lioness in the intervening night of July 10-11. That witness was Dhimant Rathod, who testified to CID that lions had killed the cow belonging to Naja Shyora (Ahir). And that Balu Sarvaiya and his family carted the carcass for disposal.

Rathod said that he watched the lions feast on the cow for about two hours on the night of July 10. Shyora told the police that his cow had gone missing on July 10.

According to investigators, the owner of the cow had recorded his statement that his cow was killed by a lioness. But the accused police officials insisted that he report it as his cow gone missing. Ahir has also told the CID that he was made to sign a paper.

According to special public prosecutor Dipendra Yadav, the accused police officers fudged records. “The FIR which they lodged named only six accused despite the fact that the victims have said more than 40 accused had assaulted them. Among the six accused, two names were repeated by the police. That is also a mischief in order to shield the accused.”

Yadav said that the main conspirator behind the incident is Shantilal Monpara, president of Sanatan Charitable Trust, that claims to be working for protection of cows.

CID officers said the officials falsely lodged a “missing complaint on behalf of the cow owner” for a missing cow despite the fact that Bediya village falls under Gir Gadhada police station area. Jhala, Parmar and Chudasama were suspended on July 18 and a departmental inquiry is going on against them.

The state control room message was conveyed to Kanchan Parmar, in charge of the Sanakhada outpost under which Mota Samadhiyala village falls. She met the “gau rakshaks” bringing the Sarvaiya boys to the police station. She was “suspended for being ignorant about the goings-on in the area” and for allowing the gau rakshaks to take the Sarvaiyas to the police station on their own.

The third policeman suspended was Hardevsinh Parmar, the head constable of D staff, a section responsible for intelligence gathering for failure to report the goings-on and the fourth officer to lose his job was Jhala.

Three minors have also been charged by the CID in the Juvenile Justice Board at Junagadh.

The CID has arrested 43 accused in this case so far. Two accused, Rahul Parmar and Shailesh Bhambhaniya, who were arrested last week have not been chargesheeted. Two other accused, Jayrajsinh Gohil and Dilubha Gohil, are absconding.