Theft of the dagger, gifted to former prime minister Jawaharlal Nehru by Saudi Arabia, from a glass frame in the gifts gallery Monday had triggered a furore. 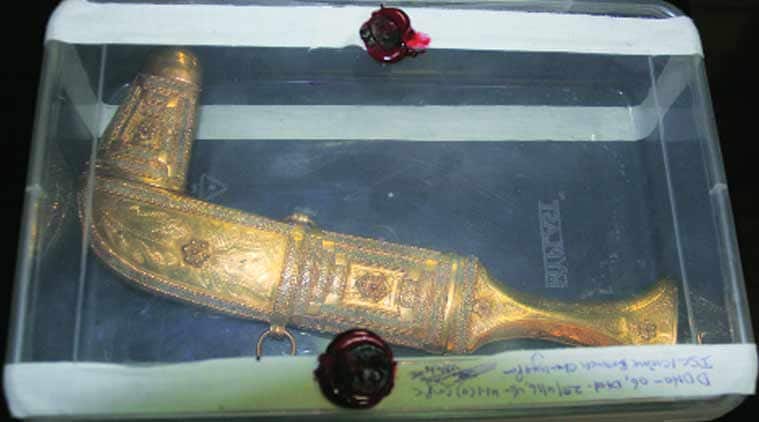 The dagger was a gift to Nehru from Saudi Arabia. Purushottam Sharma

A prized gold dagger stolen from the Nehru Memorial Museum and Library three days ago was recovered and two housekeepers were arrested for the theft Thursday, said police. Working on a clue about the involvement of a southpaw in the crime led to the breakthrough, added police.

Theft of the dagger, gifted to former prime minister Jawaharlal Nehru by Saudi Arabia, from a glass frame in the gifts gallery Monday had triggered a furore.

This line of investigation led the police to housekeeper Ram Chander (32) and later, his accomplice, Sandeep Kumar (30). Sources said they committed the theft to repay debts.

On the day of theft, Chander asked Kumar to keep watch outside, as he entered the museum from the exit gate, stole the dagger and handed it over to Kumar, said a police officer. After Chander was arrested, he spilled the beans. “On his information, a raid was conducted at Moti Bagh and Kumar was arrested from the house of his aunt and the dagger was recovered from there,” the officer added.

JCP Yadav said this was a blind case, without too many clues. The gifts gallery from where the dagger was stolen does not have CCTV cameras. According to sources, Chander is ambidextrous and tried to mislead the police, but failed.