Police said 9 persons belonging to the upper-caste community are allegedly behind the incident. 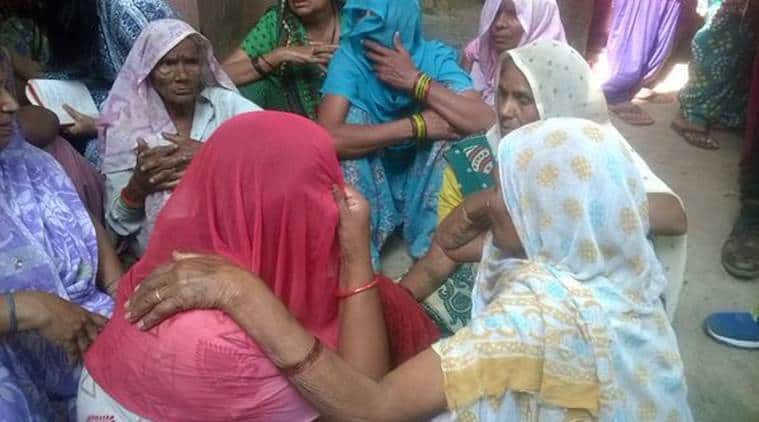 Faridabad: In a suspected inter-caste violence, two children of a Dalit family were killed while their parents received serious burn injuries after their house was set afire. (Source: Express Photo by Oinam Anand)

Two children of a Dalit family died and their parents suffered burn injuries after their home was set on fire, allegedly by upper-caste Rajputs in Sunpedh, a village in Faridabad near Delhi, in the early hours of Tuesday. Police said the attack was an act of vengeance that stemmed from a year-long feud between the two communities over a Rs-2,000 mobile phone.

Vaibhav, 3, and his nine-month-old sister Divya were brought to Safdarjung Hospital around 3 am with 60-70 per cent thermal burns. They were declared dead, while their mother Rekha, 23, is critical. Their father Jitender, who suffered burn injuries on his palms, has been discharged.

“The attackers were Rajputs and they had a confrontation with Dalits over a murder in October last year. They barged into our home when we were sleeping and they poured petrol from the window after locking our door from the outside. I could smell petrol and tried to wake up my wife, but by then the fire had started. My children died in the fire,” Jitender told The Indian Express.

Police have arrested three suspects so far and launched a manhunt for nine others mentioned in Jitender’s complaint. Five policemen, including the in-charge of Sadar Ballabgarh police station, have been suspended for dereliction of duty. The five were part of a team deployed to maintain law and order in Sunpedh after a feud between Dalits and Rajputs in October last year.

Police sources said Desh Raj, booked in connection with Tuesday’s incident, had registered a case against 11 Dalits, including two of Jitender’s brothers, for allegedly killing three of his relatives in October last year. According to Desh Raj’s FIR, Jagmal, Dalbir, Banshi and Vedprakash — all Dalits — stopped him in the village last year and claimed they had found a mobile phone belonging to his nephew, Joginder. 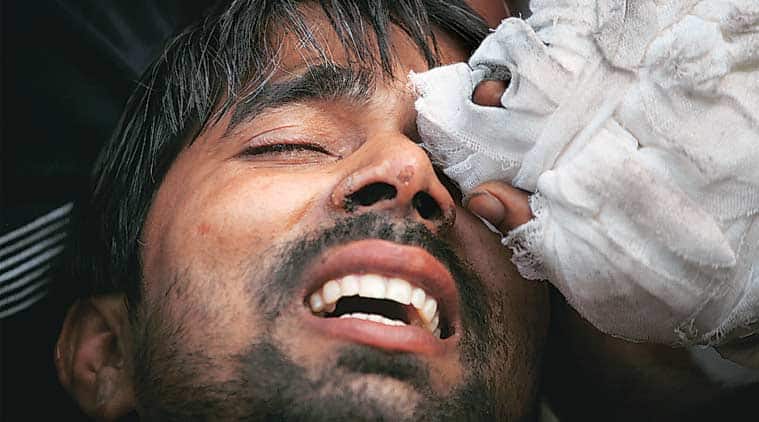 The victims’ father, Jitender, at his village in Faridabad, Tuesday. (Express Photo by: Oinam Anand)

Desh Raj also claimed that Jagmal threw the cell phone in a drain and asked him to call his nephew to take it out. “In the meantime, my nephew Joginder arrived and asked them why they threw his phone into a drain. He also asked them to take it out,” the FIR said. Police said an argument ensued, which soon turned violent. “Within minutes, others, including two women, turned up with knives, iron rods and other weapons,” Desh Raj alleged.

According to the FIR, Desh Raj’s relatives — Pappu, Indraaj and Bharat Pal — also reached the spot, but they were allegedly stabbed to death by the Dalits. A case was registered on October 6, 2014 at Sadar Ballabgarh police station, following which the 11 Dalits named in the FIR were arrested.

But Jitender’s relative Manish said, “No phone was stolen or lost. A Rajput’s phone fell into a drain and he asked one of my relatives to pick it up and abused our caste. There was an argument, which turned violent.”

Assistant commissioner of police (Sadar Ballabgarh sub-division) Vishnu Dayal said the attack took place around 2.30 am and locals noticed a fire in Jitender’s home. They alerted villagers, who were at a religious programme organised by the Dalit community.

“People rushed to Jitender’s house. The family was taken to the hospital in assistant sub-inspector Wali Mohammed’s car. They were first taken to a government hospital nearby, and then referred to Delhi’s Safdarjung Hospital,” Dayal said.

Forensic Sciences teams from Faridabad and Madhuban in Karnal have collected physical evidence from the spot.

A senior doctor at Safdarjung Hospital said, “Rekha has thermal burns on her upper body and face, which make her condition critical. But her condition is improving.” Doctors said the children were “completely charred”.

“It is likely the inflammatory object first hit the area where the children were located, because they were completely charred,” a doctor said.

J&K: 14 killed as bus falls into gorge in Udhampur district