This is the spot where a mother and daughter — 35, and 14 — travelling from Noida to Shahjahanpur in Uttar Pradesh were dragged out of their car and allegedly raped by group of seven-eight men early Saturday morning. 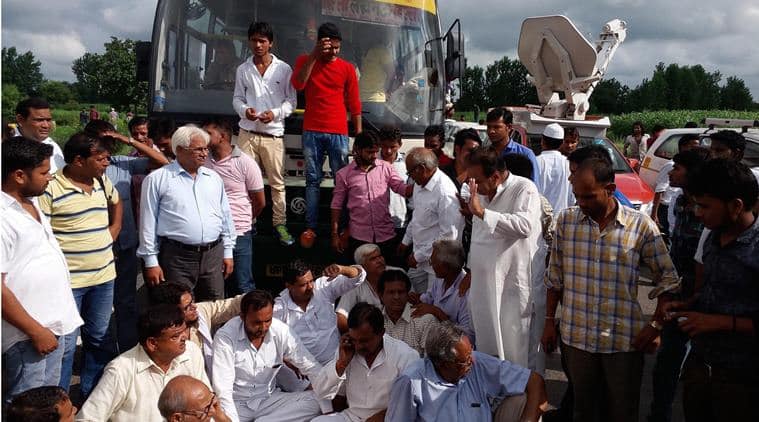 People block National Highway 91 in Bulandshahr against the rape of a woman and her 13-year-old girl, on Sunday. (Source: PTI Photo)

In a damp portion of a freshly cut millet field, around 200 metres off the Delhi-Kanpur National Highway 91, a golden necklace and a small soiled dark blue purse lie abandoned. A group of Dostpur village residents gathered at the spot pick these up and say, “Media and some of us spotted these today. Look at the inefficiency of the administration, they haven’t been able to recover these in more than 24 hours.”

This is the spot where a mother and daughter — 35, and 14 — travelling from Noida to Shahjahanpur in Uttar Pradesh were dragged out of their car and allegedly raped by group of seven-eight men early Saturday morning. Police claimed that initial investigations indicated the involvement of a local gang in the incident and said three people picked up by them from Wair railway station had been identified by the victims. “They will soon be arrested,” said Uttar Pradesh DGP Javeed Ahmed, who was among those who visited the spot along with UP Principal Secretary (Home) Debashish Panda.

As a local MLA along with his supporters also descended to the spot, there were no ropes or police personnel cordoning off the crime spot till at least Sunday afternoon. Police identified the three people picked up by them as Babloo (a resident of Faridabad), Naresh (a resident of Bhatinda) and Rayees (from Sultani area in Bulandshahr district). “Babloo has criminal cases against him and has gone to prison earlier. Further investigations are underway,” Ahmed said.

A case of gangrape, robbery and dacoity has been registered against unknown persons while six teams are searching the area for the accused, police said. The family had left their residence in Noida’s Sector 68 to go to Shahjahanpur for a relative’s death ceremony, late on Friday night.

Giving details of the incident, Ahmad said, “Around 1.30-2 am, some object was thrown towards the car. Around six-eight people grabbed the occupants of the car — three men and three women. The hands and legs of the three men were tied and they were kept in the jowar fields. Meanwhile, the car was taken inside, driven on the kuchcha road, and unmentionable things were done to two of the women.

Twenty minutes after the incident, the victims called the police on 100 from their mobile phone, but the call was not answered. They then called some acquaintance. Around 4.30 am, officers from the nearby police station reached the spot. The medical examination of the victims has been conducted and evidence has been collected from the crime scene.”

Ahmed added that while there was a police car on the highway, the family was taken too far inside the fields. “Their screams could not be heard since they were a little far from the highway.” Denying that there had been delay by police in handling the matter, Ahmed added, “The SSP came to know about the incident around 5.30 am and within 10-15 minutes, he had reached the crime scene.” The DGP said they would be seeking that the matter be taken up in a fast track court.

Principal Secretary Panda said the stringent National Security Act would be invoked in the case. “The CM (Akhilesh Yadav) and the administration have taken up the case in utmost seriousness. Apart from the local police, many senior police officers are heading the investigation. There will be no laxity on the part of the government.”

Station officer of the local Kotwali Dehat police station Ram Sain Singh and the night duty officer at the station have been suspended, while an inquiry has been ordered against Circle Officer (City) Himanshu Kumar. In Dostpur village near the fields where the alleged rape took place, people accused Ram Sain Singh of trying to hush up the case. “The police station is around 2 km from here. There is a police patrol car on the highway. How can this incident take place here? We have been told the SO did not pay heed to the victims’ allegations when they approached him. Police tried to push the case under the carpet. We came to know about the incident only on Saturday morning when people from the village went to their fields and saw police personnel,” said Hari Om Sharma, Dostpur village head.

Debia constitueny MLA Bhagwan Sharma (Guddu Pandit), a former SP leader, attacked the Akhilesh government. Surrounded by supporters raising slogans against the government, Sharma said, “There has been negligence on the part of the police. If the government cannot ensure safety on the highway, what security will they provide to villages? Strict action should be taken against all the officers responsible for this.”