Research labs are already functioning and MA and MSc classes will start from tomorrow. We will also complete all scholarship and salary payments by evening. 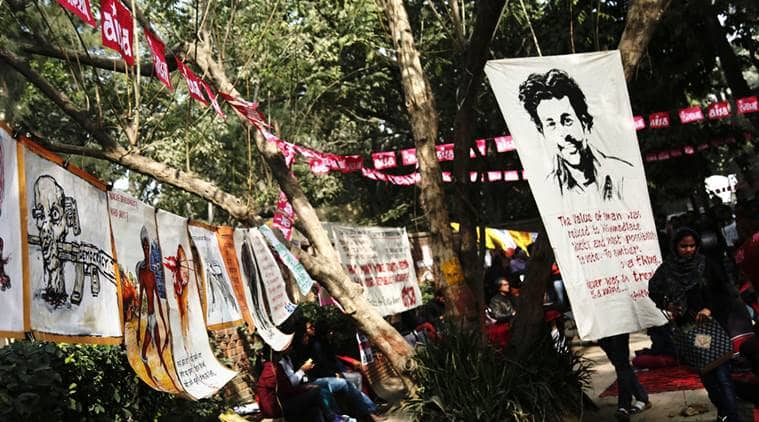 Classes  finally resumed at the University of Hyderabad after days of protest. (Express Photo by Tashi Tobgyal )

While the Students Joint Action Committee (JAC), which has been leading the agitation, continued its protest in the form of a relay hunger strike, it did not disrupt classes. The JAC has indefinitely postponed the ‘Chalo Delhi’ programme. The SC/ST teachers also called off their strike. Meanwhile, members of the Ambedkar Yojana Sangham and Samanthara Publication House sat on a one-day fast at the venue.
Acting VC M Periasamy said all faculties functioned normally through the day.

“We have deposited salaries and scholarship funds. There was a meeting of deans today where it was decided that the deans will discuss with respective faculty members the demands put forward by the students. Some of the demands, like removal of V-C Prof P Appa Rao, can only be decided by the HRD Ministry. Recommendations made by various committees after student suicides in the university earlier will be taken up for discussion…The ex-gratia of Rs 8 lakh is being immediately paid to Rohith’s family. Teachers, faculty members and students are also contributing to raise additional amount. The matter of giving employment to a member of Rohith’s family is also being taken up,’’ said Periasamy.

While the semester registration date was extended to February 8, the semester itself has been extended by two weeks. The judicial commission appointed by the Centre is likely to visit the university in the next two days. Officials said that students and teachers will be free to submit affidavits and statements to the commission.