Salian was reacting to The Indian Express report on how the NIA did a U-turn on Tuesday to oppose the discharge of the nine Muslim men facing terror charges in the case. 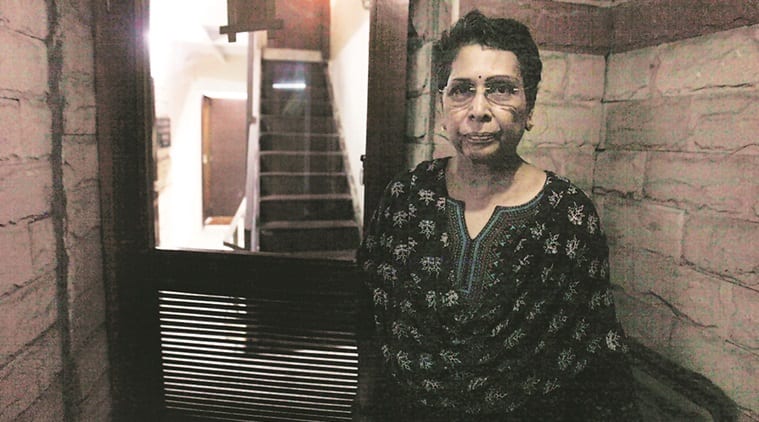 Rohini Salian was a leading Indian public prosecutor in the sessions court at his Fort office, Mumbai. EXPRESS PHOTO BY VASANT PRABHU

ROHINI Salian, former special public prosecutor in the Malegaon blasts case of 2006, said Wednesday that she had sought more time to file a more “assertive” chargesheet based on the NIA’s findings that Hindu right-wing extremists may have been involved. But then, Salian added, she found that it had already been filed by a colleague without her knowledge.

Salian was reacting to The Indian Express report on how the NIA did a U-turn on Tuesday to oppose the discharge of the nine Muslim men facing terror charges in the case two years after it told a Maharashtra Control of Organised Crime Act (MCOCA) court in Mumbai that it did not have any evidence to link them to the blasts. Sessions Judge V V Patil will pass a final order on April 25.

Also read | Since this new govt came, I have been told to go soft on accused (Hindu extremists): Special Public Prosecutor Rohini Salian

Salian said that she had been present in court in April 2014 when the NIA said that it did not want to oppose the bail applications of the nine accused. “There was little discussion or argument on the issue. The NIA simply said that they did not want to raise any objection to the bail of the accused,” said Salian.

Speaking to The Indian Express on the 2006 case chargesheet, Salian said: “Their Investigation Officer (IO) had told me in 2014 that the findings of the NIA showed that it was a Hindu extremist group that was behind the crime. The next morning, I applied for an extension of 15 days for the filing of the chargesheet. But that same afternoon, another in-house prosecutor filed the chargesheet on their behalf. I learnt of this only much later.”

The IO involved was Suhas Varke, said Salian. In an interview to The Indian Express on June 25, 2015, Salian had identified Varke as the officer who had passed on a message from NIA asking her to “go soft” on the accused in the 2008 Malegaon blasts case. At the time, Salian had accused the NIA of not wanting a favourable verdict. NIA denied all allegations.

At least 37 people were killed Salian speaks up again after NIA’s Malegaon U-turn in the blasts of 2006 while four were killed in the explosions of 2008.

Asked about the 2006 case, Salian said, “For a long time, the filing of the chargesheet dragged on. Finally, in the chargesheet filed by the other public prosecutor, NIA pointed to the involvement of the right-wing group. I put through my comments to the NIA and stated that we need to be very assertive about which group was behind the blast. Was it the first group of Muslims as the (Maharashtra) ATS had claimed or the second group of Hindus as deduced by NIA? Also if it was the second group, what about the first one? The NIA itself had recommended discharging the first group of accused. After going through the evidence and using my own analysis, I had given these comments. And because I wanted the chargesheet to have this clarity, I had asked for 15 days’ extension.”

Salian also confirmed that prior to the filing of the chargesheet, “NIA did not oppose the discharge application of the Muslims accused based on their 2-3 years of investigation where they had found no evidence against them”.

Elaborating on the NIA’s findings, Salian said that of the two in the Muslim group who were believed to have planted the bombs in 2006, “one was in Yavatmal at the time of the blast and the other was in judicial custody”.

Reacting to Tuesday’s proceedings, Salian said investigative agencies needed to stick to their respective stands. “The ATS filed the chargesheet against the first group of accused under MCOCA, saying that the Muslims were part of an organised crime syndicate. Later, NIA said Hindus and not Muslims were behind the blasts. They need to now stick to that and give relief to the earlier group. How can both groups be accused under MCOCA? Even if there have been conflicting chargesheets following extended investigations the prosecutor can withdraw a case with the permission of the government. The prosecutor can suggest to the court that a case can be withdrawn and the judge can take a decision on that. Justice should prevail. One cannot have a situation where there is injustice to both groups. I am not supporting either ATS or NIA. The truth should come out,” said Salian. Sunanda MehtaSunanda Mehta is the author of The Extraordinary Life and Death of Sun... read more