Rohith’s friends echo his story of struggle: ‘Don’t touch them, don’t play with them…’

Dontha Prashanth, Vijay Kumar, Seshaiah Chemudagunta and Sunkanna Velpua continue to sit in protest at the University of Hyderabad, like they were doing on the day their friend Rohith Vemula committed suicide. The four friends of Rohith, fellow Dalits and PhD students, were suspended by the university along with him. Apart from the four, Rohith […] 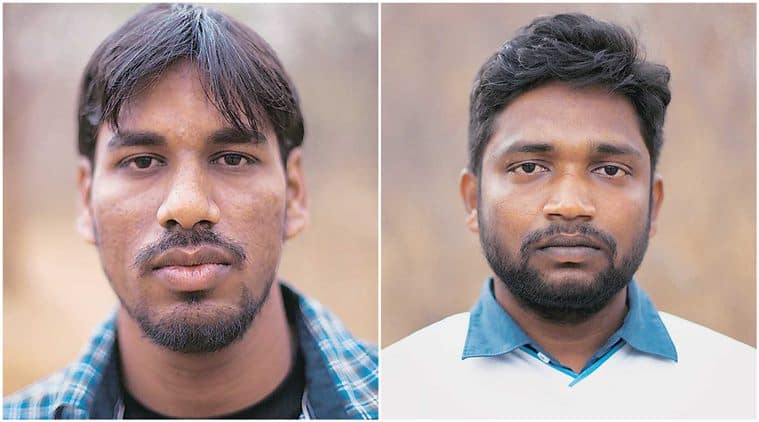 Dontha Prashanth, Vijay Kumar, Seshaiah Chemudagunta and Sunkanna Velpua continue to sit in protest at the University of Hyderabad, like they were doing on the day their friend Rohith Vemula committed suicide. The four friends of Rohith, fellow Dalits and PhD students, were suspended by the university along with him.

Apart from the four, Rohith spent his last days with Uma Maheshwar and Ramji Chintagada, also PhD students at the university and members of the Ambedkar Students Assocation (ASA).

As Rohith’s story reverberates across the country, his friends who come from similar backgrounds with similar accounts of struggle fight despair and heartbreak.

The first member of his family to go to college, Seshaiah wants nothing more than to become a professor. “Education is the silver bullet. Look at me, my parents were bonded labourers working for zamindars. Sometimes I had to work too and I was allowed inside the house but could not touch anything. They gave me water and buttermilk, but only poured it from above and into my hands. This was 1995, almost 50 years after Independence,” he says.

The zamindars would also instruct their children — ‘Play with them, but don’t touch them, don’t eat what they offer you’. “I still remember. I still remember,” he says.

For a long while, Seshaiah would even feel guilty for this resentment within him. “I used to think, my parents work for them, I work for them, they give us money, perhaps we should be grateful. That was till I read B R Ambedkar. I decided then that I will fight, for myself and for my community, and I will teach. Hopefully, in 20 years, no child will have to go through what I had to.”

Seshaiah began his PhD in 2013, and his thesis subject is ‘Social exclusion and inclusive policy’. Should he become a professor, his parents, now dead, won’t be around to see it.

Seshaiah remembers Rohith, whom he met in 2010, as their “rising star”. “He was articulate, a brilliant scholar and he did not back down from an argument. Next year, he would have become the ASA president, no doubt about it.”

* Parents are agricultural labourers
* Joined UoH in 2009
* Gets a UGC JRF fellowship of around Rs 25,000 a month, sends most of the money home

Vijay remembers clearly the first time he was treated differently. “After school in Class III, we would play in a small ground. One day upper-caste parents told their children to be ‘careful’ of us. I was a class leader, but children were told to stay away from me.”

He would often wonder why, says Vijay. “I thought it was because they were financially better than us… because they would play with ST children.”

As he grew up, things didn’t get any better. “In Class XI, I worked as a labourer for a Reddy family. I would think, ‘Why do I have to drink water from discarded plastic glasses, while others got a steel tumbler?’.”

He hopes to finish his PhD thesis, on ‘Welfare state and Dalit education’, and eventually become an IAS officer. “Things have to change and that’s why I want to join the IAS.”

Vijay, who met Rohith in 2014, was the one to discover his body. “He was a tireless worker and we saw no sign that he felt the need to take this extreme step.”

The oldest of the six friends, Sunkanna rues his poor grasp of English. “In my village, I was not even allowed to go to school. My parents said it was because we were ‘different’. Eventually, a missionary couple began schooling me and other Scheduled Castes. But even they had to stop because of pressure,” says Sunkanna.

At home, his parents taught him to “never put your foot on a wall”, “never enter a temple”. “I thought something was wrong with me. It was only after I started reading Dr Ambedkar in college that things began to make sense,” Sunkanna says.

When he finally joined school in Class VI, it was the first time he learnt ABC. “Till then, I did not even know there was something called English. I went to a spoken English course in Hyderabad, so (my English) must be okay now,” he says.

Sunkanna completed his PhD in 2015, and is currently waiting for the viva.
Considered a guiding force in the ASA, Sunkanna met Rohith in 2012, when the latter was in the SFI. “Slowly he understood the politics of identity and moved to the ASA,” says Sunkanna.

* Parents are labourers
* Joined UoH in 2006
* No fellowship

Like his friends, Uma’s memories of discrimination start in school. “I always had to be careful about where I sat or how I spoke. I was told I had to be respectful.”

The shadow of the bias trailed him to university. “I was good in Telugu but English is what is important. When I came to university, I noticed that most students spoke English and the ones who did not
were mostly Dalits. It’s not a coincidence,” he says.

According to Uma, the university was different when he joined. “Ragging was very bad, particularly for SCs. They can be recognised, you know, (from) their shirts or chappals. Upper caste boys would wait to target students like that.” That’s why the ASA is important, he adds. “People were scared of attacking Dalits because the ASA was there to help.”

Uma, who met Rohith more than four years ago, is among those most devastated by his death. In his suicide note, Rohith apologised to Uma, whom he called Umaanna, for committing suicide in his room. Uma sat on a hunger fast following Rohith’s death.

Uma says, “I had a computer and Internet, and Rohith could rarely live without Facebook and the Web.”

* Father is an excise inspector, mother a primary schoolteacher
* Joined UoH in 2007
* No fellowship

Unlike the others, Ramji had an easier time as a child as he studied at Sainik School. “There only discipline matters,” Ramji says.

But then he came to Loyola College in Chennai for graduation. “One day this fair boy came to me, shook my hand and said I look like him. I asked him what he meant. He said he was a Brahmin, and that we should stick together. When I told him I was from the Mala community, he pulled his hand away and walked off,” says Ramji, now the ASA president.

He met Rohith in 2010, the year he began his PhD. Ramji is the only other person mentioned in Rohith’s suicide note apart from Uma. Since Rohith’s fellowship money had not been coming for seven months, he regularly borrowed money from friends, primarily from Ramji.

“He was the brightest guy I met, I am still not able to process his death,” Ramji says.

* Father is a driver, mother an agricultural labourer
* Joined UoH in 2006
* No fellowship

Dontha loved cricket, and the pitch saw his first encounter with caste. He was in Class VI. “One day, some upper castes were playing with us. This boy said I could play as long as I did not touch him. How can you play a sport without some contact?” Dontha remembers wondering.

But as he grew up, he got used to hearing similar remarks. “Once, while I was waiting for a friend outside his house, I heard his grandmother shouting at him, don’t touch ‘them’,” Dontha says.

In 2011, he became the president of the UoH Students’ Union.

“I’m still recovering from what has happened,” says the PhD student. “Rohith gave none of us a clue that he was in such a frame of mind. In the last few days we often spoke about how our movement had gained little traction.”

Odisha: In poorest district, infant dies after branding by quack