The Hyderabad Central University (HCU) is roiling in the aftermath of the suicide of Dalit research scholar Rohith Vemula. 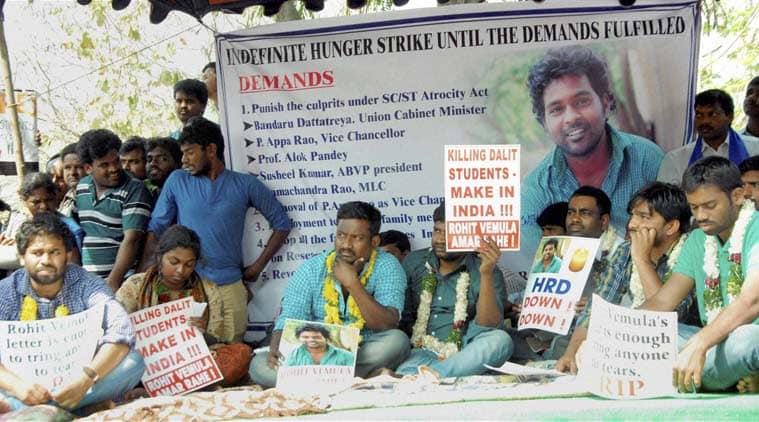 Students protesting after the suicide of dalit student Rohith Vemula at Hyderabad Central University in Hyderabad on Thursday. (PTI Photo)

Students at the University of Hyderabad, protesting the suspension of five research scholars, one of whom committed suicide last Sunday, rejected the Executive Council’s decision Thursday to revoke the suspension “with immediate effect” and also an appeal to return to classes.

Seeking the resignation of Vice Chancellor Appa Rao Podile, members of the Joint Action Committee (JAC) for Social Justice, representing the protesters, chased away two professors he had sent to hold a dialogue with the students. The JAC said it was turning down the decision of the EC, the highest decision-making body of the university.

“We have rejected the vice chancellor’s appeal and the circular on termination of punishment of the four students. In our opinion, Prof Appa Rao Podile is not the legitimate vice chancellor anymore. He has been on the run, not seen in the campus since Sunday. He should immediately surrender to police,” the JAC said.

The Indian Express had first reported Wednesday that the vice chancellor was keen to dilute the punishment meted out to the five students, including Rohith Vemula who committed suicide Sunday, to cool tempers on the campus.

Watch Video: Why did Rohith Vemula hang himself?

The vice chancellor was also considering possible closure of the institution for a few days to help normalcy return to the campus, but eventually decided against it. Rao, who has temporarily moved out of the campus, appealed to students to maintain calm and harmony and repose faith in internal mechanisms to resolve the issue.

Last November, the EC expelled five students, all Dalits, from the hostel and barred their access to public places on campus. They were, however, allowed to attend lectures and pursue their research. The students were punished for allegedly assaulting an ABVP student leader. The issue snowballed into a political storm after Vemula committed suicide in a hostel room Sunday. 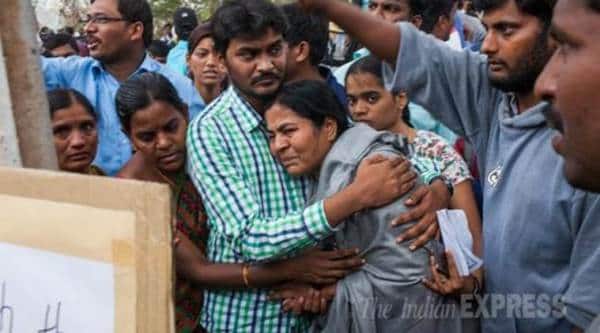 Meanwhile, the two-member fact-finding committee sent by the government to the university reported back to the HRD Ministry Thursday morning. It is expected to submit its report to HRD Minister Smriti Irani Friday.

Based on interaction with several stakeholders who deposed before the panel, The Indian Express has learnt that the committee is unlikely to fault the university administration on grounds of caste discrimination. Officers Surat Singh and Shakila T Shamsu refused to discuss their findings when their comments were sought.

University sources said teachers who interacted with the HRD representatives said Vemula was a bright student who had topped his PhD interview at the time of his enrolment and had secured admission on merit and not through quota even though he was a Dalit.

He, however, became distant and stopped responding to his PhD supervisor’s calls starting August last year when he was first accused of assaulting the ABVP student leader. Students and teachers were of the opinion that may be the punishment should have been limited only to hostel suspension and that barring access to public spaces should have been avoided.

On the issue of withholding Vemula’s JRF fellowship for seven months, the university administration is said to have defended itself saying this had nothing to do with the disciplinary action taken against him, but was delayed because Vemula changed his area of PhD research midway. This required some paperwork and final approval of the University Grants Commission, the disbursing agency for his fellowship.

According to sources in the university administration, multiple depositions to the panel allude to the fact that the problem on campus was “purely of student indiscipline” and that the vice chancellor went by the rulebook in dealing with the matter.

The fact-finding committee is said to have met over 50 people including the four suspended students, Vemula’s parents, agitating students, faculty members, the vice chancellor and the ABVP student leader who was allegedly assaulted. It, however, could not interact with Professor R P Sharma who was the interim vice chancellor when the incident of student indiscipline took place.

Students and faculty members, who met Shamsu and Singh in Hyderabad, told The Indian Express they have informed the panel that the vice chancellor hasn’t met the agitating students personally since Vemula’s suicide and has only been issuing statements and press releases appealing for calm on campus.

On Thursday, when senior faculty members Prof T V Rao and Prof Vinod Pavarala visited the site of the protests to hold a dialogue with students, they were greeted with boos and taunts. “We do not want to negotiate with VC’s chamchas,’’ students shouted, forcing the two professors to leave.

Prof Pavarala said: “The university had taken a decision today to terminate the punishment of the students. We came here to hold a dialogue with the students to address their concerns. But the atmosphere here is not conducive, so we are going back.”

JAC coordinator Venkatesh Chauhan said: “We do not want to negotiate or hold a dialogue with any of the representatives sent by P Appa Rao. We do not consider him vice chancellor anymore. He should quit first and all our demands regarding reinstatement of the four suspended students, compensation to Rohith’s family should be met.”

The JAC also criticised the Dean, Students’ Welfare, Prof P Prakash Babu, also a Dalit. “DSW Prakash Babu was initially an accused in the case filed by ABVP president N Susheel Kumar. However, he was co-opted in the EC sub-committee which decided on the suspension and social boycott of the five students. The JAC believes and reiterates that the DSW is also a culprit… It is humiliating for the protesting students to receive such a circular through the DSW’s office that justifies the actions of all the culprits,’’ the JAC said.