The pollution during this year’s Diwali was expected to be worse than those during 2014 and 2015 due to a combination of adverse meteorological factors. 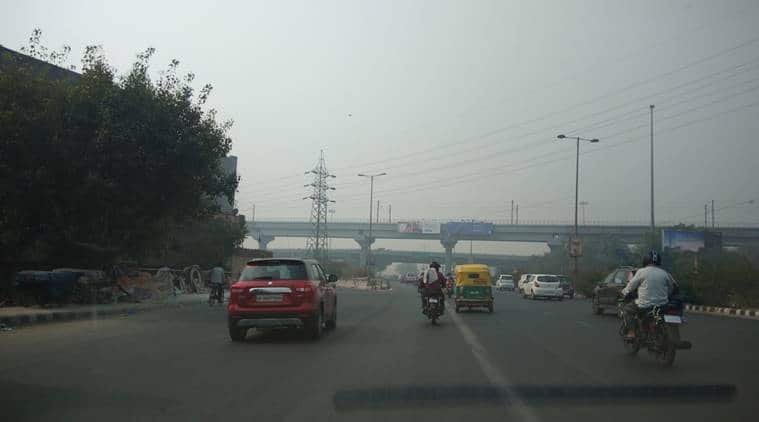 Air pollution worsened across India as particulate matters shot up in many cities. Early morning visuals from East Delhi on Monday. (Express photo)

Air pollution across the country went up to alarmingly high levels amid Diwali celebrations on Sunday and the morning after. In the capital itself, people woke up to smog with visibility up to 200 metres. According to air quality monitored by  the Central Pollution Control Board, PM 2.5 in Delhi went up to 999 in the US Embassy area and 702 in Anand Vihar. In R K Puram, PM 2.5 went up to 643 micrograms which is almost ten times the safe limit of 60 micrograms per cubic metres and PM 10 stood at 999 micrograms per cubic metres which is  also way more than the safe limit of 100 micrograms. 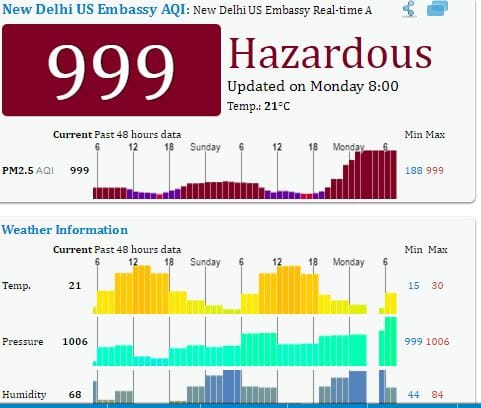 In Mumbai, PM 2.5 went up to the hazardous level of 494. System of Air Quality and Weather Forecasting and Research (SAFAR) had earlier said that particulate matter in the air in Mumbai was expected to increase this Diwali, leading to a worse air pollution level than last year. The air quality index (AQI) was expected to go as high as 334, which comes under the ‘very poor’ category. SAFAR also revealed that Mumbai’s air quality was better than Navi Mumbai and Delhi that had recorded 309 and 394 respectively on Saturday.

WATCH: Delhi’s Air Quality Likely To Improve Only After Two Days: Here’s Why

In Pune’s Shivajinagar area, maximum value for PM 2.5 and PM 10 was found to be 400 and 268 respectively. The conditions were worse in Ahmedabad where PM 2.5 stood at 999, which is almost 15 times more than the safe limit. Lucknow wasnt far behind when it came to severe Air Quality Index. According to data, PM 2.5 went as high as 834 in the city. Towards the east, in Kolkata the maximum value of PM 2.5 was recorded to be at 378 which is said to ‘Unhealthy’. In Bangalore, the Air Quality Index stood at the ‘Moderate’ level with PM 2.5 going up to three times more than the safe limit. The ultrafine particulate matters are harmful as prolonged exposure to them could cause respiratory diseases and other bronchial diseases. The condition is particularly harmful for the elderly, children and pregnant women. Since particulate matter like RSPM (Respirable Suspended Particulate Matter) are inhaled, lungs and the airway are the first organs to be affected. While PM10 enters alveoli or small sacks in lungs and gets accumulated there. Thus, while PM10 affects upper respiratory tract from the nose and windpipe, the smaller PM2.5 particles affect the lower respiratory system since they enter the lungs.

SAFAR had earlier predicted that pollution during this year’s Diwali is expected to be worse than those during 2014 and 2015 due to a combination of adverse meteorological factors like slow wind speed and moisture in the air, which is a source of  major hindrance in the dispersion of suspended pollutants.

The Delhi government on Saturday had reviewed the ambient air quality in the capital. “Agricultural fires in fields of neighbouring states, particularly Punjab and Haryana, are a major contributor in the deterioration of ambient air quality, which will also suffer due to inversion and calm meteorological conditions (that are) currently prevailing,” said the government’s official statement.

8 SIMI activists, who escaped from Bhopal jail, killed in encounter