PM Modi, Nawaz Sharif wave at each other at UN peacekeeping summit

Sharif walked into the conference hall for the Leaders' Summit on Peacekeeping being hosted by US President Barack Obama, and waved at Modi. The Indian Prime Minister waved back and smiled. 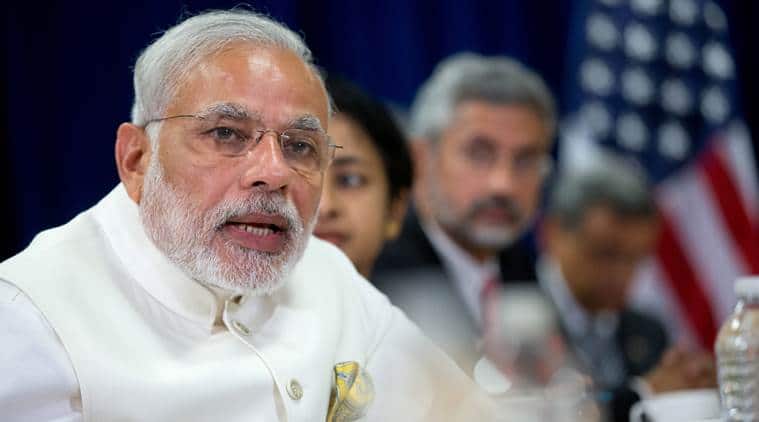 Amid a chill in bilateral relations, waving at each other was all that Prime Minister Narendra Modi and his Pakistani counterpart Nawaz Sharif did Sunday as they attended the UN peacekeeping summit.

Assembling for the Leaders’ Summit on Peacekeeping being hosted by US President Barack Obama, Modi walked into the conference hall first. Sharif followed a few minutes later and waved at Modi. The Indian Prime Minister waved back and smiled.

Then there was a pause, after which Modi waved again and Sharif acknowledged and smiled.

The two leaders, who were in New York for UN summits. At the conference, they were seated across the horse-shoe-shaped table.

Seated on Modi’s side of the table were the UN Secretary General Ban Ki-moon and Japanese Prime Minister Shinzo Abe and other leaders from France and Indonesia.

On Sharif’s side were US President Barack Obama, Bangladesh Prime Minister Sheikh Hasina and leaders from Rwanda and Ethiopia.

Apart from the wave, there was no other interaction or gesture exchange between the two leaders. Since they reached the chamber just minutes before the summit was to begin, they took their seats and did not walk around the room to meet or greet any other leaders present.

Modi and Sharif were in the chamber for almost an hour and a half. The two leaders clapped at the end of each other’s speech.

Modi left immediately after addressing the summit. He did not walk up to any leader to shake hands. Sharif left the summit about 10-15 minutes after him.

Before taking his seat next to Indian leader, Abe hadwalked up to him and cordially shook his hands. Modi, sitting in his chair, also smiled back and shook hands with the Japanese leader.

After Sharif finished his speech, he walked back to his seat but did not look at or shake hands with Obama who also did not get up to greet the leader.

Obama had greeted Chinese President Xi Jinping after the Chinese leader’s speech and they talked for a few minutes before Jinping left.

The US president also reached out to shake hands with British Prime Minister David Cameron after the latter’s speech and they two leaders spoke for a few moments.

Sharif had also greeted Secretary of State John Kerry before the summit started. Kerry greeted him with a thumbs up sign.

Modi and Sharif are staying in the same hotel and the summit was the only platform where they were under one roof during their stay in the city for the UN General Assembly.

Modi will leave for India later in the evening and Sharif will stay on to address the General Assembly debate on September 30.

Ahead of the UN meet, there were questions whether the two leaders will have a meeting or at least manage a handshake, particularly since they are staying in the same hotel.

Modi and Sharif had last met in Ufa, Russia, in July on the sidelines of the BRICS and SCO summits.

India-Pak ties are going through a chill particularly after last month’s cancellation of NSA-level talks following differences over the agenda proposed by Islamabad, and a planned meeting between Kashmiri separatists and Pakistan’s National Security Advisor Sartaj Aziz.

The decision to hold meetings between the NSAs and the heads of border guards were taken during the Ufa talks.

Last week, Indian officials had said that Prime Minister Modi will not have a bilateral meeting with Sharif during his current visit to the US.

Modi and Sharif are staying in the same hotel in the city – the iconic Waldorf Astoria.