In Paris, a brief climate-change moment 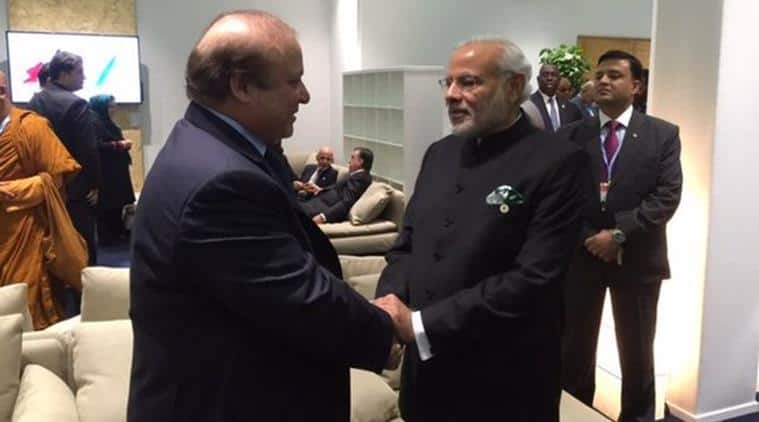 More than four-and-half months after Narendra Modi and Nawaz Sharif met in the Russian city of Ufa and sought to resume the Indo-Pak dialogue process, the two prime ministers met in Paris Monday at the climate change conference centre’s lobby, in what was seen as a “pull-aside meeting” between the two leaders.

They were seen shaking hands and talking animatedly “for a few minutes” while sitting on a sofa — without aides and officials by their side.

“If both sides want that issues should be taken forward, then it is not possible that these will not be taken forward.” He said Pakistan wants to discuss and resolve issues, which are political in nature. “Baatchit ka darwaza jo hai woh bhi kholna chahiye (doors for dialogue should be kept open),” Sharif said.

He declined to go into exact details of his talks with Modi.

Vikas Swarup, spokesperson for the Ministry of External Affairs, who is travelling with Modi, posted a picture of the handshake between the two leaders and tweeted, “PM @narendramodi meets PM Nawaz Sharif at COP 21 in Paris.”

He later tweeted: “This was a brief exchange of courtesies in the Leaders Lounge. PM meets many Heads of State/Govt.”

Indian and Pakistan government officials told The Indian Express that there was no meeting scheduled between the two sides, and there were no proposals of a meeting sent to each other — unlike in July this year when the PMs met in Ufa on the sidelines of the Shanghai Cooperation Organisation (SCO) meeting after it was planned.

The meeting between the two leaders also came two days after Sharif said in Malta that Pakistan is ready for talks with India — without preconditions. Sharif’s willingness for a bilateral conversation, as he attended the Commonwealth Heads of Government Meeting (CHOGM), was read as a positive signal by South Block.

Pakistan’s media described the meeting between Sharif and Modi as a “positive development”. Pakistan Television (PTV), which showed footage of them seated together, reported that the meeting was held in a “cordial atmosphere” which it said was a “positive and happy occasion”.

Monday’s meeting also comes in the backdrop of a proposed India-Pakistan cricket series in Sri Lanka in December — as has been agreed between the two cricket boards. However, the Indian government has not given its nod, while Sharif is learnt to have given his approval.

The meeting between two PMs is also significant as External Affairs Minister Sushma Swaraj has been invited for the “Heart of Asia” conference — on Afghanistan — in Islamabad which is scheduled to be held on December 9. India has not confirmed its participation as yet, and this meeting between the PMs may lead to a decision on New Delhi’s political representation at the meeting.

The Paris meeting is expected to ease the strain in ties between the two countries, after the scheduled meeting between the National Security Advisors was called off over differences on the “agenda of talks” and Pakistan’s NSA’s proposed meeting with Hurriyat leaders from Jammu and Kashmir.

The meeting in August was cancelled as the two sides dug in heels, not leaving any room for flexibility.

Following the cancellation of talks between the NSAs, New Delhi had reached out to Islamabad for a meeting between the two NSAs in New York on the issue of terrorism, on the sidelines of the UN General Assembly in September.

But with Pakistan insisting on a simultaneous meeting between the two foreign ministers to discuss “other issues”, the Indian side did not go ahead with the meeting of the NSAs. The two prime ministers, who stayed in the same New York hotel, did not meet and were seen in video footage waving to each other from a distance.

“If both sides want that the relations should be taken forward, then if it does not happen, it is not right,” he said.

He said that Pakistan wants to discuss and resolve the issues, which are political in nature. “baatchit ka darwaza jo hai who hi kholna chahiye…(doors for dialogue should be kept open),” he told reporters in Paris.