ONGC and Indian Railways are the latest addition to the list of PSUs which are being considered for future joint ventures. 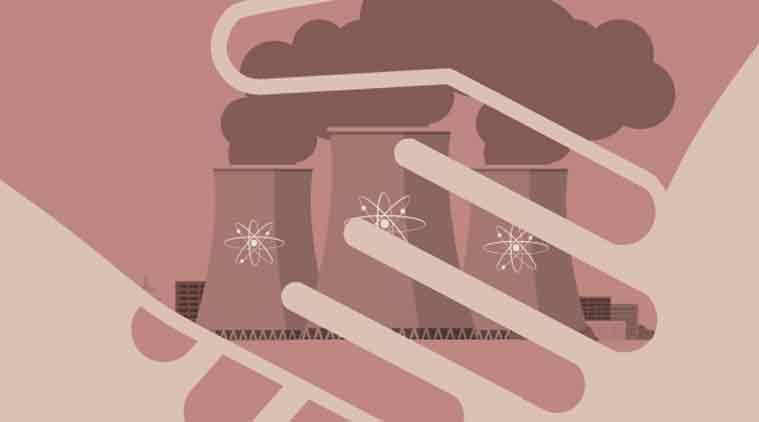 The decision to leverage the JVs for new projects being set up under the foreign collaboration route marks a departure from the current strategy followed by the country’s nuclear establishment. (Illustration: Subrata Dhar)

State-owned Nuclear Power Corporation of India Ltd (NPCIL), which is in advanced stages of launching nuclear ventures in collaboration with three public sector firms, NTPC Ltd, Indian Oil Corporation and Nalco, has expanded the scope of such collaborations to include two other government entities — upstream petroleum major ONGC Ltd and the Indian Railways. This comes at a time when the NDA government has cleared a proposal to designate upcoming atomic power projects with foreign technical cooperation to be set up through joint ventures, which is likely to be the pattern followed for all new projects, going beyond the Kudankulam units that are already being set up with Russian assistance.

Preliminary discussions have already been held with ONGC on the issue while “exploratory discussions” for setting up a joint venture with the Indian Railways to set up nuclear power plants has been held. An official involved in the exercise said the decision to leverage the JVs for new projects being set up under the foreign collaboration route marks a departure from the current strategy followed by the country’s nuclear establishment, where atomic power reactors are executed solely by NPCIL and are funded by a mix of debt and equity leveraged by the nuclear power utility. Sources indicated that the broader view within the nuclear establishment earlier was to deploy all the three JVs for new projects being set up based on the indigenous Pressurised Heavy Water Reactor, or PHWR, technology. The plan to deploy the JVs for new imported light water reactor, or LWR-based projects to be set with foreign technical cooperation, could thereby, mark a change in strategies and potentially result in the pooling of additional equity worth nearly Rs 30,000 crore for expanding the country’s installed nuclear power capacity.

NPCIL is already in the process of launching nuclear ventures in collaboration with the three cash-rich state-owned energy utilities — NTPC Ltd, Indian Oil Corporation and Nalco. Discussions in this regard with the prospective JV partners, NTPC, IOC and Nalco, have been initiated, government sources involved in the exercise said.

The move comes amid concerns over India’s nuclear liability provisions holding up the deployment of imported light water reactor-based projects in collaboration with global vendors. The proposal by NPCIL to strike joint ventures with cash-rich PSUs is being seen as an alternative strategy to tide over the paucity of funds and ramp up execution capability for new projects using the indigenous pressurised heavy water reactor technology.

At present, only two PSUs — NPCIL and Bharatiya Nabhikiya Vidyut Nigam Limited (BHAVINI), which are under the control of the Department of Atomic Energy, can operate nuclear power plants in the country. The Atomic Energy Act, 1962, prescribed that a company in which not less than 51 per cent of the paid-up share capital is held by the Central government can operate nuclear stations. However, the licensing of joint ventures was a grey area. The new law amends the Atomic Energy Act, 1962 to change the definition of a “government company” as described in the Act with a view to widen its scope. The JV firms with these three public sector energy majors — Anushakti Vidyut Nigam Ltd (NPCIL and NTPC), NPCIL-Indian Oil Nuclear Energy Corporation Ltd and NPCIL- NALCO Power Company Ltd have already been incorporated.

Currently, nuclear power reactors are being funded by a mix of debt and equity and are executed by NPCIL. The equity requirements are met from internal resources of the NPCIL, a PSU under the DAE, and domestic budgetary support, a DAE official said.

In December last year, the Atomic Energy (Amendment) Act was one of the five legislations that got the President’s approval, thereby ensuring the legal framework for NPCIL to launch collaborations with the three other public sector utilities.

The leveraging of NTPC, IOC and Nalco’s project execution capabilities is part of the DAE’s medium-term plan. While NPCIL itself has about Rs 13,000 crore of investible surplus, the three other PSUs, including NTPC, Nalco and IOC, have broadly agreed to bring in Rs 10,000 crore each. The plan entails IOC, NTPC and Nalco each picking up 49 per cent equity in atomic projects proposed to be set up in partnership with NPCIL, which will hold majority equity in the three proposed ventures.

NPCIL currently operates 21 reactors with a generation capacity of 5,780 MWe and another 1,000 MWe reactor at the Kudankulam project in advanced stages of commencing commercial operations.