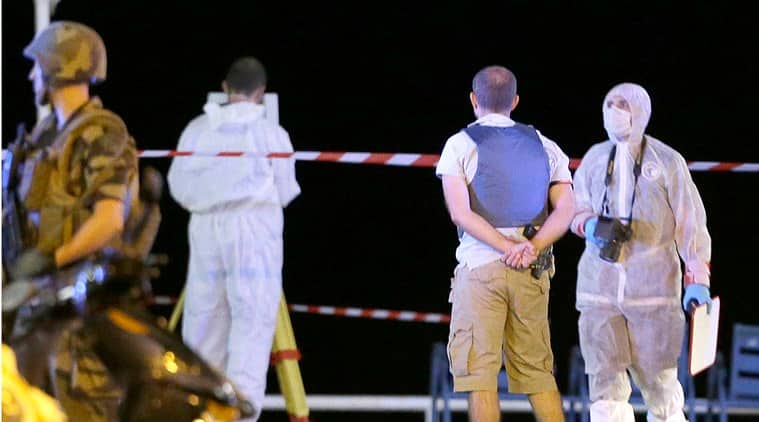 Nice truck attack: Forensic officers at the scene of an attack after a truck drove on to the sidewalk and plowed through a crowd of revelers who’d gathered to watch the fireworks in the French resort city of Nice, southern France, Friday, July 15, 2016. A spokesman for France’s Interior Ministry says there are likely to be “several dozen dead” after a truck drove into a crowd of revelers celebrating Bastille Day in the French city of Nice. (AP Photo/Claude Paris)

Prime Minister Narendra Modi on Friday reached out to France after a trucker loaded with weapons and hand grenades killed at least 80 people who’d gathered to watch fireworks on the occasion of Bastille Day celebrations in the French resort city of Nice late Thursday.

In a statement, PM Modi condemned the horrific attack. “Appalled by horrific Nice attack. I strongly condemn such mindless acts of violence. My thoughts are with the families of deceased.”

Police shot and killed the driver, who drove at high speed for over 100 metres (yards) along the famed Promenade des Anglais seafront before hitting the mass of spectators, regional sub-prefect Sebastien Humbert told France Info radio.

Just hours after announcing in the traditional Bastille Day interview that the state of emergency, in place since November attacks that killed 130 in Paris, was to be removed, France President Hollande said it must be extended for three months. That decision will need parliamentary approval.

The president of the Provence Alpes Côte d’Azur regional council, which includes Nice, said the truck was loaded with arms and grenades. Christian Estrosi told BFM TV that “the driver fired on the crowd, according to the police who killed him.”