"Whether lives lost are of youth, police or security personnel, it distresses us," said PM Modi. 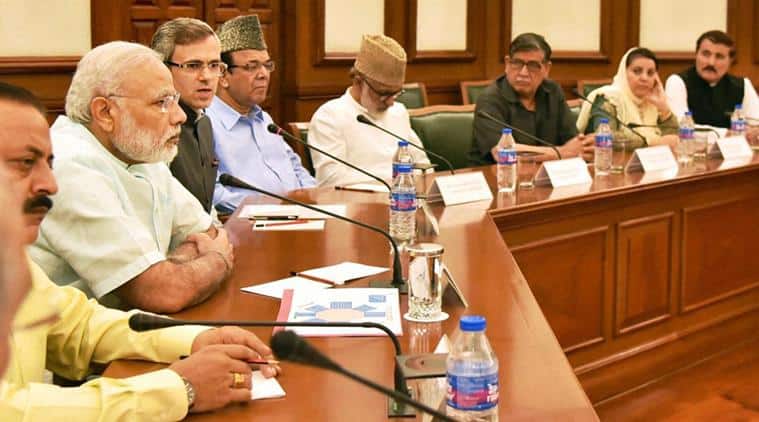 An opposition delegation from Jammu and Kashmir during a meeting with Prime Minister Narendra Modi in New Delhi on Monday. (PTI Photo)

A day after Union Finance Minister Arun Jaitley said there would be “no compromise” with separatists and those indulging in violence, Prime Minister Narendra Modi called for dialogue to “find a permanent and lasting solution to the problem” in Jammu and Kashmir “within the framework of the Constitution”.

Meeting a delegation of J&K Opposition parties Monday, Modi reached out to the Valley expressing “deep concern and pain at the prevailing situation” saying “those who lost their lives during recent disturbances are part of us, our nation… whether the lives lost are of our youth, security personnel or police, it distresses us”.

Appealing for restoration of normalcy, the Prime Minister said: “There has to be dialogue and we need to find a permanent and lasting solution to the problem within the framework of the Constitution.” He underlined “the need for all political parties to work together to find a solution”.

He said his government and the nation stand with Jammu and Kashmir and “all political parties should reach out to the people”. He expressed his commitment to the development of the state and its people.

The government said the discussion was free and frank, a view also shared by the delegation. “The Prime Minister spoke for an hour with the delegation. It was a very good meeting. His attitude was very positive. He said this issue is not a party issue and let us not turn it into a political fight. The Prime Minister said they can call him even at midnight on any problem regarding Kashmir.”

One from the delegation said: “The Prime Minister wanted to extend the discussion further. Since he had to go for the inauguration ceremony of the renovated Stor Palace in Kabul via video-conferencing, he offered to return in half hour and resume the discussion. Since we had discussed all points, we wound up the meeting.”

The delegation drew the attention of the Prime Minister to the issue of protesting adolescents and youths becoming the victims of protests and cited the incident in which a teenaged boy Irfan was killed when a teargas shell hit him.

In their memorandum, the Opposition leaders urged the Prime Minister to announce “an immediate ban on pellet guns that have caused grievous injuries in the current unrest and maimed and blinded many young boys and girls”.

“We also request you to advise relevant quarters against the policy of mass harassment, raids and arrests as this has worsened an already volatile situation in the state and goes against the values and principles of our democratic fabric and ethos,” the memorandum stated.

After the meeting, Omar Abdullah said: “We emphasised that the issue of Jammu and Kashmir is more political in nature. Time and again, such situations do arise but if we are unable to find a political solution, we will be repeating our mistakes.”

He said the Prime Minister agreed with the delegation that development alone was not an answer to the crisis. He declined to interpret what this meant, saying he did not wish to put words in the Prime Minister’s mouth.

Asked about Jaitley’s remarks against stone-pelters, Abdullah said: “I do not wish to say anything on this as the Prime Minister told us nothing like this. And more importantly, let us not play politics over Jammu and Kashmir. We will get ample time to play political games later.”

J&K Congress chief G A Mir said: “We told him that his government had shrunk the role of mainstream parties in the Valley… it is not a good sign. We said it should be noted that no Opposition party has demanded that Chief Minister Mehbooba Mufti should step down. We told him that there is need to talk to one and all in the Valley and implement promises that the BJP and PDP made in their agenda of alliance.”