NEDA convenor Himanta Biswa Sarma made it clear that the new forum was out to make the Northeast Congress-free as early as possible. 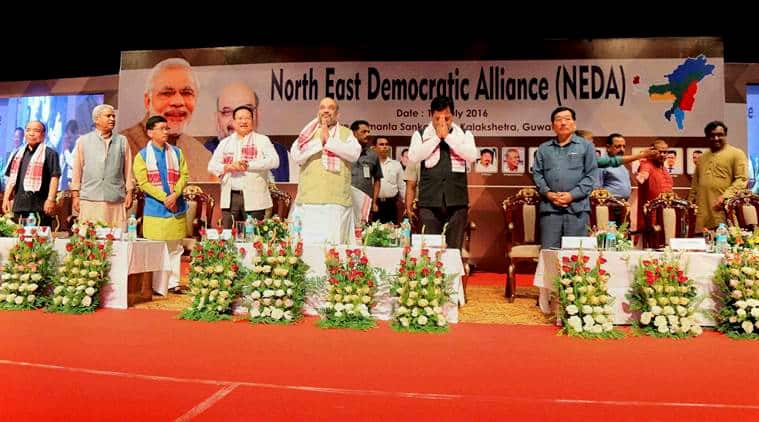 WITH BJP chief Amit Shah formally launching the North East Democratic Alliance (NEDA) here on Wednesday, the party claimed it was bow time to make the Northeast free of Congress. The party also made it clear that it would take along the regional parties on this mission.

While Shah, in his speech, emphasised on increasing coordination among the states of the region as NEDA’s primary objective, and identified development and connectivity as two key solutions to the woes of the region, NEDA convener Himanta Biswa Sarma made it clear that the new forum wanted to make the Northeast Congress-free as early as possible.

“The launch of NEDA proves that a Congress-mukt Northeast is feasible. Our immediate agenda is to form our governments in Manipur and Meghalaya,” said Sarma, who played the pivotal role in the BJP-led alliance’s victory over the Congress in the assembly elections. The BJP has assured it would give good governance to the Northeastern states, he added.

While two parties from Meghalaya — UDP and NPP — have already joined NEDA, the BJP is yet to find a regional partner in Manipur. The two states are going to polls early next year.

Sarma, who also holds the Number 2 position in the government in Assam, also made it clear that the BJP would partner with regional parties in its plan to make the Northeast Congress-free.

“Earlier, regional parties of the Northeast had their own forum, but did not have any national back-up. The BJP has assured them that it will be
their equal partner. This assurance itself has given a big boost to the regional parties,” Sarma, who was till September 2015 in the Congress, said.
This was in line with Prime Minister Narendra Modi’s concept of “sab ka saath, sab ka vikas”, he said.