A local court has sent both Zeeshan and Saddam, who have been arrested under the state’s Prevention of Cow Slaughter Act, to judicial custody for 14 days. 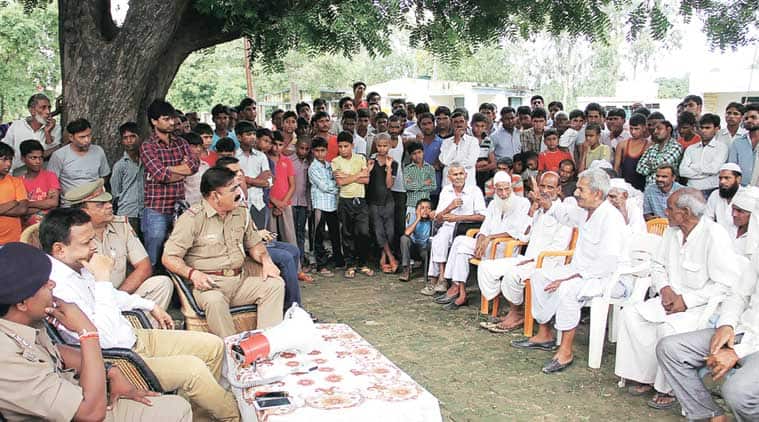 Two days after a mob attacked the house of a Muslim family at Kadali in UP’s Muzaffarnagar district on suspicion of cow slaughter, local police is yet to lodge a case against those who were part of the mob. On Monday, Khatauli Police arrested Saddam (28), the nephew of house owner Zeeshan, who was earlier arrested.

A local court has sent both Zeeshan and Saddam, who have been arrested under the state’s Prevention of Cow Slaughter Act, to judicial custody for 14 days. Police is still looking for Saddam’s brother Parvez (24) and Zeeshan’s wife Shehnaz (50).

Asked why they were yet to lodge a complaint against those who attacked Zeeshan’s residence, SHO, Khatauli police station, Pankaj Tyagi said they are still probing the incident.

“The damaged wall was not a pucca wall. When 30-odd people gathered outside, the cattle at Zeeshan’s residence panicked. We suspect the movement of the cattle, and not the protesters, caused the damage to the wall. However, we will examine the footage available and accordingly take action,” he said.

Asked if police had identified the people suspected to have attacked Zeeshan’s house, Tyagi said, “According to informers, some local residents were present. But, most of them were from neighbouring village Mandwadi.”

Tyagi said they had found the carcass of a calf from Zeeshan’s residence. Another calf was found untouched.

“There is no dispute over the presence of a slaughtered calf at Zeeshan’s residence and we have mentioned it in the FIR. However, the meat has been sent for examination.”

He, however, added that “Bajrang Dal” members were present outside Zeeshan’s house during the protests. “I cannot identify them, but people from Bajrang Dal were present,” he said.

Local Pradhan Pawan Kumar Saini said, “Eyewitnesses saw Saddam and Parvez secretly taking two calves to Zeeshan’s house. They had placed a curtain where the slaughter was to take place. But, when eyewitnesses saw them with a knife sharpener, it was confirmed that they were carrying out the slaughter.”

Saini added that Zeeshan and Parvez recently received bail in another case of cow slaughter. “They were arrested only three months back, but were later released on bail. They are repeated offenders and local residents have complained against them earlier,” he said.

Circle Officer Hari Ram Yadav said: “We request that any information about illegal activities like cow slaughter should be reported to police. However, this does not mean one can take law in his hands and attack the accused. In the last two days, rumours of violence in the village have been spread. This is because local residents have allowed outsiders to take advantage of the incident. It will be in the village’s interest that both communities do not allow spread of such rumours.”