The accused, two of whom have been identified as Rakesh Kumar and Ramesh Kumar, claimed to be contractors who picked animal carcasses from roadsides and Gaushalas. 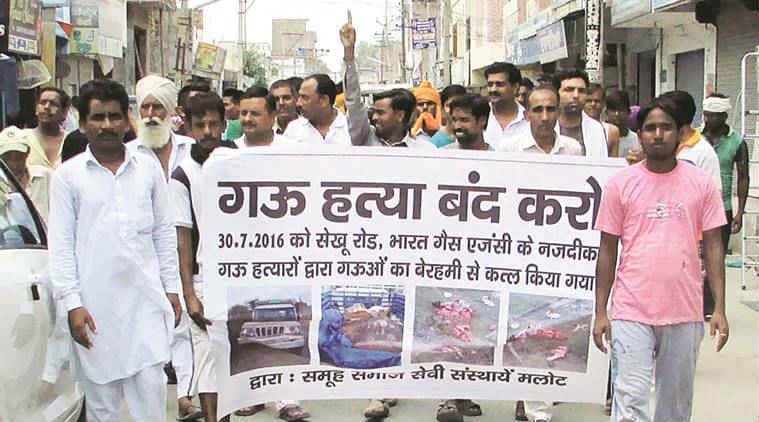 Five persons were booked on Sunday after members of the Gau Sewa Raksha Board complained they were skinning and chopping parts of a dead “cow” in the open in Malaut town the previous night. The police’s preliminary probe into the matter suggested that the carcass was that of a buffallo.

“We don’t want to argue over whether the animal was a buffalo or a cow. According to us, it was a cow and we saw chopped parts in the open. And even if it was a buffalo, is it justified to skin and chop it in the open on the side of GT road?” said Pankaj Bansal, local in-charge, Gau Sewa Raksha Board.

The accused, two of whom have been identified as Rakesh Kumar and Ramesh Kumar, claimed to be contractors who picked animal carcasses from roadsides and Gaushalas. They claim to have received a call informing them of a dead buffalo on the Shekhu road in Malaut town on Saturday night. They had already picked up a few carcasses in their vehicle, a tempo, and found it difficult to load the dead animal. They decided to chop it up to load it onto the vehicle.

Commuters, considering it a case of cow slaughter, gathered in large number and protested. Soon, the local Gau Sewa Raksha Board unit arrived at the scene. Finding other animal carcasses in the parked vehicle, some persons started pelting stones at it.

While three of the “contractors” managed to escape, Rakesh and Ramesh were roughed up before being handed over to the police.

“Our teams defused the situation and quickly sent the animals to veterinary hospital for post-mortem to verify if the animal that was chopped up was a cow or buffalo. Preliminary examination of the animal suggests that it was a buffalo,” said SSP Muktsar Gurpreet Singh Gill. “We have sent viscera samples to Mohali lab to verify. We have booked five persons under cow slaughter act. Two have been arrested.”

“The other animals (two cows and a calf) in the tempo were those that died of natural causes,” he added.

Gujarat govt to drop 236 more cases against Patidars, 90 per cent so far