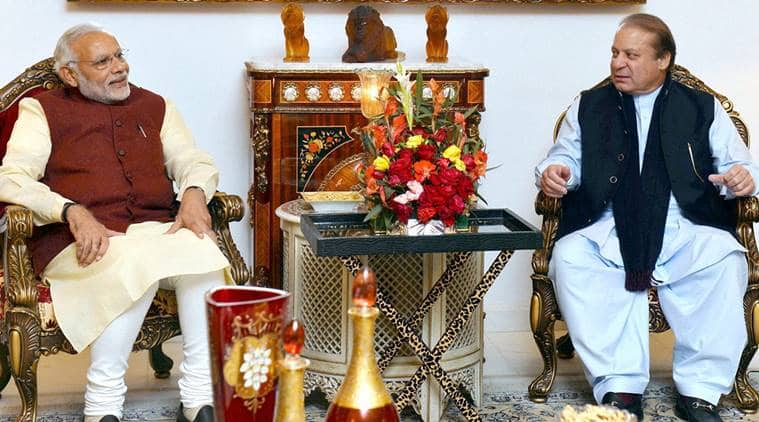 Prime Minister Narendra Modi and his Pakistani counterpart Nawaz Sharif at a meeting in Lahore in latter’s residence on Friday. (Source: PIB)

Pakistan on Thursday declared Prime Minister Narendra Modi’s brief visit to meet his counterpart Nawaz Sharif in Lahore a “purely goodwill” one and said they agreed to understand each other’s concerns and continue holding peace talks for prosperity in the region.

Briefing the media after Nawaz-Modi meeting at Jati Umrah residence of Sharifs, Foreign Secretary Aizaz Ahmad Chaudhry said: “PM Modi’s visit to Lahore was not a planned one. It was organised on a short notice after Mr Modi expressed his wish to come here en route to Delhi from Afghanistan.”

He said Prime Minister Modi’s visit was “purely a good will visit” and PM Sharif has termed it “positive”.

“The meeting between the two premiers was held in a cordial atmosphere. Both premiers agreed to continue the peace process (between the two countries) and work together for the purpose,” he said.

He said the premiers of both countries want opening of new avenues of prosperity for its people.

“Both premiers want restoration of mutual confidence between the two countries. There is a need of enhancing cooperation between India and Pakistan so that poverty and other issues of South Asia should be addressed,” he said.

Chaudhry further said both prime ministers also agreed to enhance people-to-people contacts and developing such an environment for the purpose.

“They also agreed to take steps to improve the relations between the two countries and work together in this regard.”

Chaudhry further said since it was a “sudden meeting” and the prime minister’s team on foreign affairs – Sartaj Aziz and Tariq Fatimi -could not make to Lahore from Islamabad.

“I was preset in Lahore thereby I attended the meeting,” he said.

To a question, Chaudhry said PM Modi did not know about the marriage of granddaughter of PM Sharif. He told him that he was in Lahore and asked Modi to come to Lahore.

“Mr Modi wished Mr Sharif happy birthday and congratulated him on her granddaughter’s wedding,” he said.

Replying another question, he said that the civil and military leadership was on “same page” on all issues including terrorism.

In what appears to be an unprecedented gesture by Prime Minister Sharif, he both received and saw off Modi at Lahore airport.