The Narendra Modi government may spend close to Rs 60,000 crore on the Mahatma Gandhi National Rural Employment Guarantee Act (MGNREGA) in the current fiscal, a record for the programme that was a baby of the previous United Progressive Alliance regime. The Narendra Modi government may spend close to Rs 60,000 crore on the Mahatma Gandhi National Rural Employment Guarantee Act (MGNREGA) in the current fiscal, a record for the programme that was a baby of the previous United Progressive Alliance regime.

The Union Budget had allocated Rs 38,500 crore towards MGNREGA for 2016-17 (April-March), which was enhanced by Rs 5,000 crore in the first batch of supplementary demand for grants moved during the monsoon session of Parliament in August.

The Rural Development Ministry has sought an additional Rs 10,000 crore, which is likely to receive approval in the next batch of supplementary grants during the coming winter session. If to the resultant Central funds of Rs 53,500 crore, the share of states — they are supposed to meet a quarter of the material costs that, in turn, make up 40 per cent of the overall expenditures — is added, the total MGNREGA spend this fiscal will work out to almost Rs 59,000 crore.

Out of this total amount, though, Rs 12,581.64 crore would go to clear the backlog of wage and material payments for 2015-16. But even after adjusting for the arrears — which were fully discharged by June — the effective expenditure for 2016-17 would be well over Rs 46,000 crore, which is higher than for any previous year.

The Modi government was under attack, particularly in the early part of its tenure, for undermining MGNREGA, which provides 100 days of guaranteed wage employment in a year to every rural household whose adult members volunteer to do unskilled manual work. 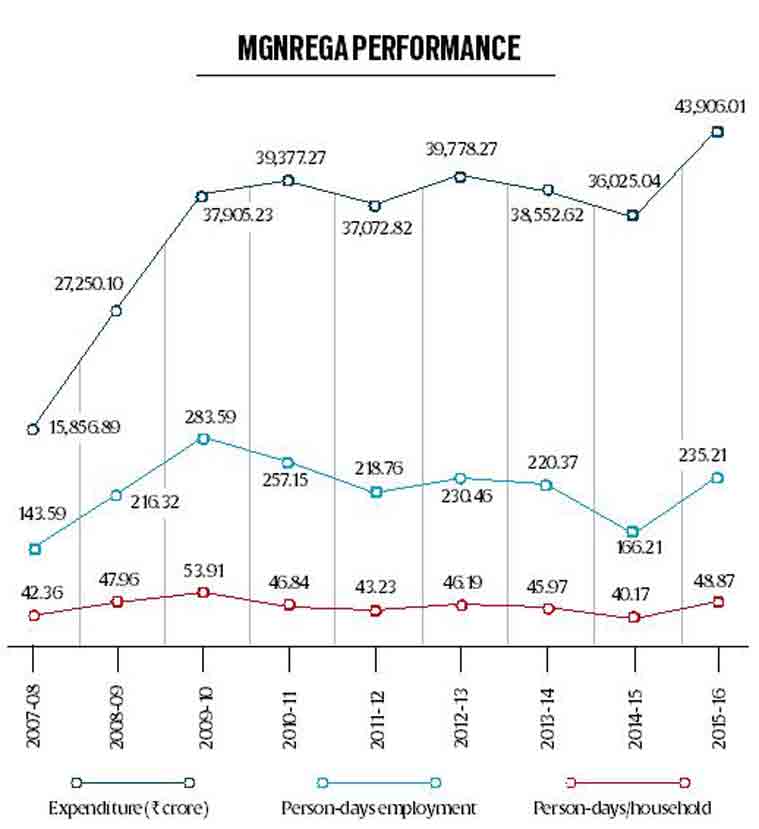 2015-16, however, saw a turnaround, largely due to public pressure and also the countrywide drought following a second consecutive monsoon failure. Not only did the expenditure on MGNREGA shoot up by nearly 22 per cent to Rs 43,906.01 crore (more, if the spill-over liability of Rs 12,581.64 crore is added), the total person-days generated also hit 235.21 crore (the highest since 2010-11) along with a rise in the average days of employment per household to 48.87 (the best after 2009-10).

These numbers have registered further improvement in 2016-17, with 138.32 crore person-days of employment generated so far, as against 116.06 crore during the same period of 2015-16. The number of person-days generated in April-June 2016 — the worst period in terms of the drought’s cumulative impact — crossed 89 crore, an all-time-high for the quarter and way above the 54.59 crore during April-June 2015. Equally significant is the fact that 51.77 per cent of wage payments have been made within 15 days. “If you exclude the wage arrears of Rs 8,000 crore for 2015-16 (out of the spill-over sum of Rs 12,581.64 crore) that were cleared by April-end, the proportion of timely payments would be 73-74 per cent now,” Amarjeet Sinha, secretary, department of rural development, told The Indian Express.

But the turnaround in overall numbers is only one part of the story. No less important is the apparent improvement in the quality of MGNREGA spending taking place. There are broadly two dimensions to this.

The first concerns targeting — whether the money being spent is actually reaching the intended beneficiaries or getting ‘leaked’. MGNREGA has 10.85 crore ‘active workers’, i.e. those who have worked under the programme at least for one day in the last three years. Out of these, there are about 8.4 crore workers whose respective Aadhaar unique identification numbers have been seeded into the NREGAsoft management information system database. As a result, 91.16 per cent of wage payments in 2015-16 could be credited directly into the accounts of the beneficiaries through an electronic fund management system integrated with the web-enabled database. That ratio has increased to 93.87 per cent this fiscal, while being only 37.17 per cent in 2013-14 and 13.7 per cent the year before.

Simultaneously, there has been an effort to make the bank accounts of the beneficiaries also Aadhaar-linked. This enables them to receive wages through the Aadhaar Payment Bridge (APB), a centralised system for electronically channelising all government subsidies and welfare programme benefits. “About 3.4 crore workers are now getting their payments through the APB system. Our target is to convert the bank accounts of all the 10.85 crore active MGNREGA workers into the APB system by March 2017, to achieve convergence of both the direct benefit transfer as well as the Pradhan Mantri Jan-Dhan Yojana programmes. If every beneficiary has an Aadhaar-linked bank account, into which MGNREGA wages (these amounted to Rs 30,884.89 crore in 2015-16) can be directly credited without the leakages that cash payments are normally prone to, it would be no mean feat,” claimed Sinha.

The second dimension of improving the quality of MGNREGA spending relates to the nature of assets created on the ground. Technically speaking, MGNREGA’s mandate is only to guarantee employment for a stipulated number of days to those demanding it. It makes the works undertaken to be typically of stand-alone ‘relief’ mode. Thus, even if critics are reasonably assured that wage payments are reaching the intended beneficiaries, they still raise questions over the usefulness and durability of the assets built through MGNREGA. The fact that these don’t confirm to any desired technical specifications or standards — mandatory, for instance, in the rural roads constructed under the Pradhan Mantri Gram Sadak Yojana — adds to the concerns.

The Modi government is now trying to integrate MGNREGA with other ‘productive’ government programmes, especially having to do with water conservation and natural resource management. In his Budget speech, finance minister Arun Jaitley announced that at least five lakh farm ponds or dug wells and 10 lakh compost pits for production of organic manure will be built in 2016-17 “by making productive use of the allocations under MGNREGA”.

According to Sinha, work has already been taken up on 9.2 lakh ponds, with 2.91 lakh being completed so far this fiscal. “We have also signed an MoU with the Indian Space Research Organisation for mobile-based geo-tagging of MGNREGA assets through linking its Bhuvan geo-portal with NREGAsoft. By November 30, we hope to have all the roughly five million assets created across the country since 2015-16 to be geo-tagged, with their photos being uploaded on Bhuvan along with the location and time. This will enable us to track where or even whether the assets exist,” he added.

All public works — whether carried out for ‘relief’ or undertaken by departmental enterprises like the Railways as part of ‘productive’ investment activity — ultimately require labour. MGNREGA can, theoretically, be a source of that labour which can be productively deployed in non-relief works mode round the year. Achieving that desired convergence, without compromising the programme’s basic demand-driven character, will call for some imagination and intelligent planning.