Meerut on the boil after SP leader’s murder

Politicians, including Bijnor BJP MP Kunwar Bhartendra Singh and UP Cabinet Minister Shahid Manzoor reached the area, some to visit his family and others to take stock of the damage. 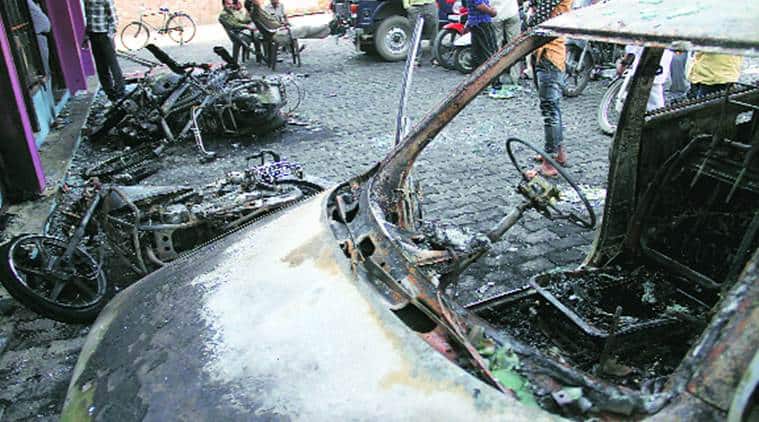 Following the murder of former councillor and Samajwadi Party leader Zahid near his residence in Meerut’s Mawana area, tension prevailed in the area with a mob torching vehicles and attacking a movie hall late Friday evening. Zahid was cremated Saturday morning.

Politicians, including Bijnor BJP MP Kunwar Bhartendra Singh and UP Cabinet Minister Shahid Manzoor reached the area, some to visit his family and others to take stock of the damage.

Charred remains of three motorcycles and two cars were found next to the burnt doors of Kapil movie hall. Security has been tightened as a preventive measure, police said.

Around 7.30 pm Friday, police received a PCR call informing them of a body lying near Bhaisa village road in Mawana. “Police reached the spot and found Zahid’s body with gunshot wounds to the head. Preliminary investigations hint at the involvement of someone close to him.

Protesters gathered in the area soon after and did not let police take the body for post-mortem. They tried to set Kapil cinema on fire and burnt vehicles parked nearby,” said Meerut SSP Dinesh Chandra Dubey, adding that the situation is now under control.

At Mawana police station, windscreens of an ambulance and a private vehicle owned by a senior police officer were smashed. “They attacked the ambulance which had reached the spot to take Zahid’s body for post-mortem,” a police officer said, adding that the body could be taken for autopsy only late Friday night.

Kapil Kumar Sharma, owner of the cinema hall, said his property was attacked as he was known to be a BJP supporter. “Thankfully, we had cancelled the night show after learning of the SP leader’s murder,” Sharma said.
According to Zahid’s family, the former councillor left home around 6.30 pm after receiving a phone call. “He never took calls from unknown numbers, so someone he knew must have called.

Nearly an hour later, I received a call informing that he was lying on the road in a pool of blood. He had gone to the graveyard where he was overseeing some construction work. He had faced some difficulties from people who claimed ownership of some land near the graveyard,” Zahid’s wife said.

Meanwhile, police are scanning CCTV footage from the area to identify protesters and those involved in Zahid’s murder. “The post-mortem report states he died due to two gunshot wounds to the left side of his head.
BJP MP Bhartendra Singh, meanwhile, demanded a probe into the “violence”.

Student with IS links planned to free Bhatkal from jail: NIA