In Tamil Nadu’s Vazhavur, another story of Dalit death and prejudice 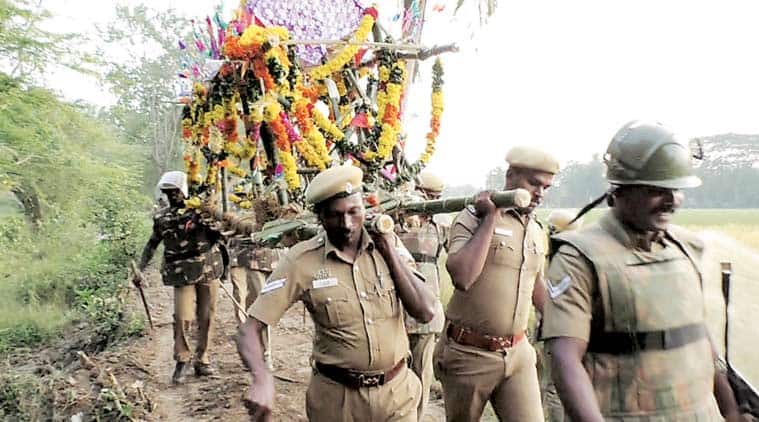 Policemen carry the body of Chellamuthu through the forest path for burial at Vazhavur, Nagapattinam.

WITH A straight face, M Karthikeyan says his grandparents, who died recently, received “the distinction of a state burial”. “They were buried by police, only the 21-gun salute was missing,” said the 30-year-old Dalit from Nagapattinam.

Behind the dark humour, is a chilling story of how caste divisions in a Tamil Nadu village forced a Dalit family to put the bodies of its near ones on ice for days after being denied access to the burial ground through a public road.

According to Karthikeyan, the influential Vanniyars of Vazhavur, led by an AIADMK leader, prevented the burial procession of his grandparents through the road, saying it was a “bad omen”. Then, police forcibly took away the bodies through a different route and buried them, ignoring even a High Court order in his grandfather’s case, he said.

His grandmother Pichammal (80) passed away last November 26, with her body being buried under similar circumstances, said Karthikeyan.

When contacted, Collector S Palanisami admitted that the administration was unable to implement the Madras High Court order to ensure access to the public path because the priority was to prevent caste clashes.

At the centre of the dispute is the route to the burial ground. Villagers and officials said Karthikeyan was asked to take the funeral procession through another path cutting through a forest and crossing a canal. Karthikeyan refused and kept the bodies on ice before they were taken away by police and buried.

“I still do not know where exactly was my grandfather buried,” said Karthikeyan.

Villagers said the situation became so volatile that Karthikeyan and his relatives threatened to commit suicide. “We poured kerosene on ourselves and shouted that we will commit suicide if the police continue to disregard the High Court order,” said Karthikeyan, his voice trembling.

Collector Palanisami blamed the “government pleader” for failing to convey the “correct picture” to the court. “It is true that we failed to implement the HC order. But we cannot ensure the rights of people always. We had to prevent that procession,” he said, while confirming that he himself belonged to the Vanniyar caste, an OBC category.

“Some Dalit youths insisted on the right to use the public road. If they had agreed to avoid the procession, considering the opposition, we could have prevented this. The opposition from the OBCs, citing their beliefs, couldn’t have been fully ignored,” he said.

DIG Senthil Kumar refused to comment on allegations that police had forcibly taken the body of Chellamuthu and lathi-charged Dalit families. “Whatever decisions I took was in consultation with the government revenue department. It was not just a police action,” he said.

AIADMK leader and panchayat president Nathan denied allegations that he opposed the procession. “I tried to settle the issue, but the police attacked them. I stand for everyone,” he said.

However, based on interviews with officials and villagers, and video footage from the spot, The Indian Express pieced together the sequence of events that show how the administration went out of its way to convince the Dalits to submit to the Vanniyar demands.

November 26, 2015: Pichammal dies of old age at her home in Mariamman Koil street, Vanniyars object to the procession being taken through the 5-km path. The Dalit family rejects suggestions from police and the RDO to take the body through the forest path filled with thorny bushes, which passes through private land and a canal. The RDO delivers an ultimatum, the family decides to keep the body at home.

November 28: The RDO and police serve the family a notice for immediate burial, citing the decomposed state of the body.

November 29: A police force, headed by the DSP, forcibly takes the body for burial from Karthikeyan’s house.

November 30-January 1: Karthikeyan submits a plea to the District Collector and the Chief Minister’s Cell, demanding access to the public road, pointing out that his grandfather was 100 years old. He gets no response.

January 4: In an interim order, the court asks the District Collector to allow the procession through the public road and submit a compliance report.

January 5: Collectorate officials and police appear before High Court in Chennai, more than 300 km away, to oppose the order. They raise law-and-order issues and inform that the forest path to the burial ground will be readied by March-end. But the court asks the administration to provide protection and ensure that the procession is allowed through the road. By the time Karthikeyan receives a copy, officials leave for the day.

January 6: At around 10 am, the SP and RDO arrive with a notice seeking immediate burial of the body; around 200 policemen are deployed. Around 11 am, the family tries to thwart efforts to take away the body by threatening to commit suicide. DIG Kumar assures protection, asks family to complete final rituals. Around 4.45pm, when the procession reaches the public road, the Vanniyars had set up a road block at least 500 m away. The procession is surrounded by police who rush the body through the forest path.

Video footage accessed by The Indian Express shows groups of policemen running into the forest with the body while the crowd, including women, are lathi-charged. “We were beaten up and taken to a marriage hall in Nagapattinam town 40 km away, instead of the nearest police station 5 km away,” said Karthikeyan. They were released in batches starting 1.30 am.

Today, Karthikeyan says all he is left with is a bunch of bills: Rs 12,000 for the writ petition, Rs 6,000 for the freezer, Rs 8,000 for the funeral band (a local custom) and Rs 4,000 for the shop from where chairs were rented. So will he file a contempt petition against the state in court? “Do you think I will go and waste my money again?” he asked.

Petroleum dealers on VAT hike: Facing losses due to odd-even, don’t add to it