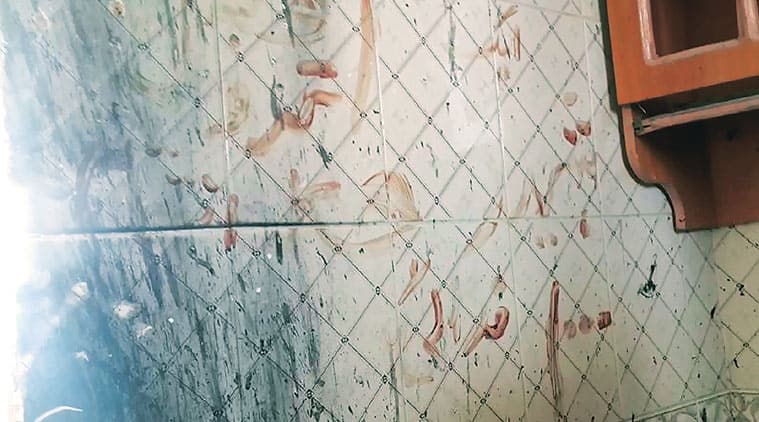 Four terrorists who attacked India’s consulate in Mazar-e-Sharif Sunday left behind graffiti written in their own blood stating that their mission was intended to avenge Afzal Guru, the J&K resident hanged in 2013 for his role in the December 13, 2000 attack on Parliament House in New Delhi, Afghan police sources said. Police special forces killed the attackers Monday night, after a 25-hour siege.

Photographs taken after police special forces stormed a building from where the terrorists were firing on the consulate show the Urdu-language slogans had been scrawled on the walls of the room where two of the terrorists had holed out.

Indian intelligence sources told The Indian Express that there was, as yet, no hard information on the identities of the attackers, or the organisation to which they were affiliated.

However, Guru was linked to the organisation Indian intelligence services believe was responsible for Saturday’s terrorist attack on the Pathankot airbase, jihadist ideologue Maulana Masood Azhar’s Jaish-e-Muhammad. Rajesh Verma, a Gurdaspur jeweller taken hostage by the Pathankot attackers, has told police his captors told him that they were acting to “take revenge” for Afzal Guru’s killing.

The revelations from Mazar-e-Sharif raise the prospect that both attacks, which came within 24 hours of each other, were organised by the Jaish-e-Muhammad, an organisation which has a long history of close ties to Pakistan’s powerful military-led Inter-Services Intelligence Directorate.

President Ashraf Ghani called Prime Minister Narendra Modi Tuesday to brief him on the findings of Afghan investigators, officials in Kabul said. Modi is believed to have assured the President that India would not be deterred from continuing military aid to Afghanistan. India recently supplied Mi25 attack helicopters to Afghanistan, and is considering supplying transport aircraft and artillery.

Long a key figure in Pakistan’s jihadi landscape, Azhar re-emerged in public after several years of low-key activity at a January 26, 2014 rally in Muzaffarabad, vowing “terrible revenge” against India for Guru’s hanging. “Let us aim guns at India first,” he said, in an Urdu-language address from Bahawalpur, transmitted through a cellphone hooked to the public address system. “We will move to Israel and United States later.”

Freed by India in 2000 in return for the life of passengers on board a hijacked Indian Airlines flight, Azhar was jailed by General Pervez Musharraf’s regime after the attempted assassination of the military ruler in 2003. He was rehabilitated by former army chief Pervez Ashfaq Kayani’s regime in 2009, as it sought to reach out to anti-regime jihadist groups, using him as a mediator.