India, US sign key defence pact to use each other’s bases for repair, supplies

LEMOA will “significantly enhance the operational capacity of the Indian armed forces, including in their response to humanitarian crises or disaster relief”. 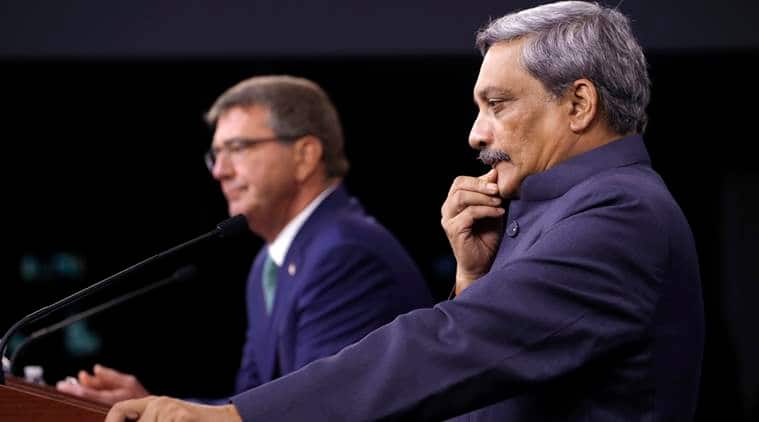 In a significant departure from its policy of not entering into a military agreement with any major power, India has signed the Logistics Exchange Memorandum of Agreement (LEMOA) with United States which will allow their militaries to work closely and use each other’s bases for repair and replenishment of supplies.

The LEMOA, which sets a precedent for other future military pacts between the two countries, was signed Monday in Washington between Defence Minister Manohar Parrikar and US counterpart Ashton Carter to facilitate opportunities for “practical engagement and exchange”.

The announcement of the pact drew sharp criticism at home from the Congress which called it a “fundamental departure” from India’s time-tested policy of “strategic military neutrality” while the CPM said the government had “compromised Indian sovereignty” and “surrendered strategic autonomy” by inking the pact.

In a statement, the Ministry of Defence said the “agreement does not create any obligation on either party to carry out any joint activity” and “does not provide for the establishment of any bases or basing arrangements”.

Maintaining that “reciprocal logistic support would be used exclusively during authorised port visits, joint exercises, joint training, and humanitarian assistance and disaster relief efforts”, it did underline that “logistics support for any other cooperative effort shall only be provided on a case-by-case basis through prior mutual consent of the parties, consistent with their respective laws, regulations and policies”.

A PTI report from Washington quoted Parrikar as telling a joint news conference with Carter: “It (LEMOA) doesn’t have anything to do with the setting up of a base. It’s basically logistics support to each other’s fleet, like supply of fuel, supply of many other things which are required for joint operations, humanitarian assistance and many other relief operations. So, it will basically ensure that both navies can be supportive of each other in the joint venture operations we do, exercises we do.”

Carter said the agreement would make joint operations between their militaries logistically easier and more efficient. “What it does is make possible and make easier operating together when we choose to. It doesn’t by itself — those agreements — those are the things that the two governments would have to agree on a case by case basis. But when they do agree, this is an agreement that makes it all go so much more smoothly and efficiently,” he said.

“It is fully mutual. In other words, we grant one another completely equal access and ease under this agreement. It’s not a basing agreement of any kind, but it does make the logistics of joint operations so much easier and so much more efficient,” he said.

The logistics agreement between the two countries was first proposed in 2003 but India did not agree to its signing until earlier this year.

The fear of being seen as a close military ally of the US held the UPA government back for a decade from signing the pact. Even after the BJP government came to power, there was significant political opposition to the pact, and resistance within the Ministry of Defence.

In April this year, when Carter visited New Delhi, the two sides announced an in-principle agreement on inking the pact. Hectic negotiations between the two sides had taken place before that visit, with US officials submitting drafts of three foundational agreements.

New Delhi chose to proceed only on the logistics agreement (LEMOA), deferring the Communications and Information Security Memorandum of Agreement (CISMOA) and a Basic Exchange and Cooperation Agreement for Geospatial Information and Services Cooperation (BECA).

On Monday, Carter said of LEMOA: “First of all, with respect to the major defence partnership agreement, that is a very substantial change. It’s an enormous change from 50 years of history. And a very substantial advance over just a few months ago.”

The LEMOA, a version of the standard US Logistics Support Agreement (LSA) tailored for India, “establishes basic terms, conditions, and procedures for reciprocal provision of logistic support, supplies, and services between the armed forces of India and the United States”.

The only similar case of an Indian agreement with a major power was the Indo-Soviet Treaty of Peace, Friendship and Cooperation in August 1971 just ahead of the Bangladesh war. But even that agreement was strategic in nature, with little cooperation at the level of the two militaries. The LEMOA, in contrast, allows Indian and American militaries to operate closely by using each other’s bases for logistics support.

Delhi’s insistence on making India-specific changes also led to a change of the agreement’s name from LSA to LEMOA. The US has signed the LSA with more than 60 countries and it has a standard text. As the Indian government insisted on various clauses to assuage concerns of unfettered access and US military bases on Indian soil, the text was amended and the agreement rechristened LEMOA.

The provision of military logistics support to the US has historically been a contentious issue in India. During the First Gulf War, Prime Minister Chandra Shekhar’s government came under fire, especially from the Rajiv Gandhi-led Congress to which it owed its existence, for letting American aircraft be refuelled on Indian soil.

The question of military support to the US also came up in 2003 during the rule of the Vajpayee government when American forces invaded Iraq to overthrow President Saddam Hussein. Many ministers and officials of that government were keen on accepting the US proposal to send an Indian brigade for the Second Gulf War but Prime Minister Atal Bihari Vajpayee decided against it. Since then, India has allowed its forces to operate abroad only under the UN flag.