Manohar Parrikar should say sorry to armed forces for insulting them: Congress

Congress leader Randeep Surjewala said that “we vehemently dismiss and strongly condemn” remarks made by Parrikar “today on two occasions”. 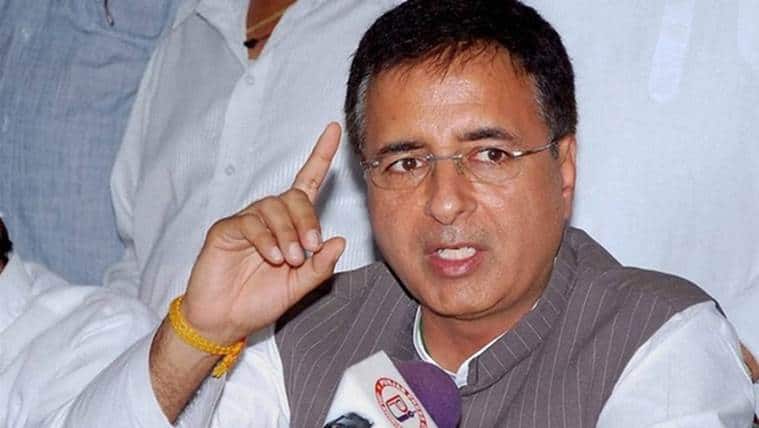 Randeep Surjewala repeatedly referred to a reported operation titled ‘Operation Ginger’, said to have been conducted in 2011 when the UPA government held office.

Responding to Defence Minister Manohar Parrikar’s remark that there have been no surgical strikes conducted in the past, the Congress Wednesday said that he and Prime Minister Narendra Modi should seek pardon from the armed forces for “undermining” their sacrifices for the country. Congress leader Randeep Surjewala said that “we vehemently dismiss and strongly condemn” remarks made by Parrikar “today on two occasions”.

“It does not behove a Defence Minister to insult the service, sacrifice and valour of the Indian Armed forces by shamelessly denying the factum of earlier ‘surgical strikes’ by Indian Army to defend the nation. Blinded by political vote-garnering out of the blood and sacrifice of our soldiers, Parrikar is unabashedly lying and misleading the people of India,” said Surjewala, in-charge of the party’s communication cell. “(The) Defence Minister is free to give credit to anyone but should abstain from undermining the huge sacrifices made by our armed forces in last 68 years,” he said.

As head of the government, Prime Minister Modi should apologise, too, for this “blatant policisation”, said Surjewala. The Congress also targeted BJP president Amit Shah for his remarks last Friday that “we will go to the people about the success of the country’s army”.

“(The) onus lies at the doorstep of PM Narendra Modi to come forward, tame his belligerent Defence Minister and BJP president (Amit Shah), apologise to the armed forces on their behalf and publicly vow to never make political capital of army’s sacrifice,” said Surjewala.

The Congress leader also repeatedly referred to a reported operation titled ‘Operation Ginger’, said to have been conducted in 2011 when the UPA government held office.

Speaking at an event in Mumbai, Parrikar had said that as per inputs he received as Defence Minister, there have been no surgical strikes in the past. He had earlier claimed that it was the NDA government that had made the Army realise its strength and prowess.

“Parrikar should immediately apologise for his statement insulting our armed forces, denying their supreme sacrifice during multiple surgical strikes and in defending the nation. Today, his statements have insulted war veterans and ex-servicemen along with all those para military and police personnel. Does he mean that those who fought the great wars of 1947, 1962, 1965, 1971 and 1999 had no courage and deserved no credit?” Surjewala asked.

He further alleged that the “unending public felicitations of the Defence Minister in Goa, Agra and Lucknow” were part of efforts to turn national security into an event management exercise.

Earlier, in a series of tweets, Surjewala asked whether the government’s way of giving credit to the Army was by denying demands of One-Rank-One-Pension and recommendations under the 7th pay commission.