Maharashtra: Beaten, forced to wave saffron, cop says his force let him down

Sheikh said the attack began at 8.30 am on February 20, when over 100 youth assembled outside the police chowky, after he and Awaskar had stopped a group of 25 from hoisting the saffron flag the previous night. ASI Yunus Sheikh being paraded with the saffron flag; admitted to a hospital in Latur, Maharashtra.

Yunus Sheikh, the Assistant Sub-Inspector who was assaulted, forced to carry a “saffron flag” and paraded through a town in Maharashtra’s Latur by members of a fringe right-wing group, has said that he was let down by his own colleagues who failed to save him.

The 50-year-old’s family has demanded a departmental probe into why reinforcements from Renapur police station failed to arrive in time to tackle the mob at Pangaon, around 15 km away, on Saturday. Sheikh, who is posted at the Renapur station, was on duty at Pangaon chowky.

Police on Sunday arrested 16 youths, including a minor, for assaulting Sheikh and forcing him to chant ‘Jai Bhawani, Jai Shivaji’ after he and K Awaskar, a head constable, tried to prevent them from hoisting the flag near Ambedkar Chowk, officially labelled as a “sensitive area”, to mark Shivaji Jayanti.

On Monday, speaking to The Indian Express from his bed at the Latur Civil Hospital, Sheikh said, “I phoned the control room and appraised them about the situation. Using my mobile, I called the in-charge of the Renapur station on his cellphone. But still, they failed to send reinforcements in time. The policemen reached Pangaon by 10.10 am. By then, the mob had assaulted me brutally and humiliated me by parading me.”

Latur SP Dyaneshwar Chavan, however, said reinforcements had reached Pangaon within 9.50 am that day after two calls were received from Sheikh at 8.30 am and 8.45 am. Maharashtra DGP Pravin Dixit said the Aurangabad IG has been asked to “visit the spot and submit a report”.

Sheikh said the attack began at 8.30 am on February 20, when over 100 youth assembled outside the police chowky, after he and Awaskar had stopped a group of 25 from hoisting the saffron flag the previous night. Police said the group belonged to the little-known Shivaji Jayanti Mandal.

“I begged them to let me go but I was mercilessly beaten until I collapsed. The mob took me to the same spot where I had stopped them from hoisting the flag. They made me hoist the same flag there and forced me to chant ‘Jai Bhawani, Jai Shivaji’,” said Sheikh.

“I was just doing my duty. Ambedkar Chowk is marked as a communally sensitive area. We even assured the group the previous night that we would find a better place for them to hoist the flag,” said Sheikh. ASI Yunus Sheikh being paraded with the saffron flag.

Sheikh’s 28-year-old son, Farooq Yunus Sheikh, alleged that his father was “singled out” by the mob.

“The other constable who had also restrained the crowd from hoisting the flag the previous night was not paraded or attacked the way my father was. They spared him but not my father. What are we to make out of this?” asked Farooq, who works for an IT firm in Pune.

“If reinforcements had be sent on time, my father would not have been attacked. In every case, a departmental enquiry is ordered, we hope that this case is no different,” he said. 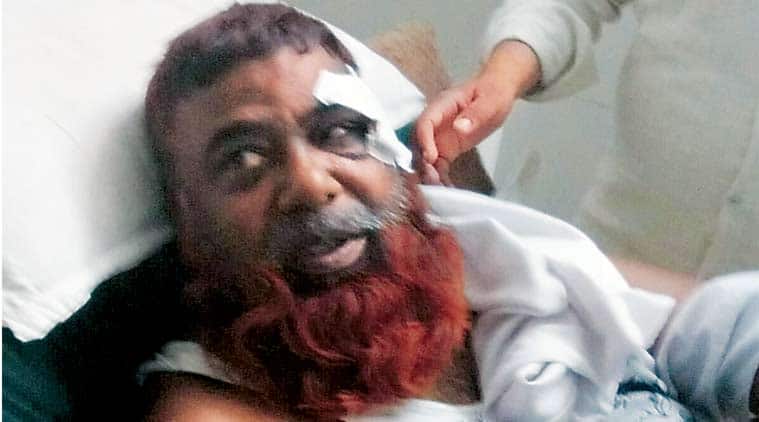 Admitted to a hospital in Latur, Maharashtra.

Farooq, who is tending to his father in hospital, said he was not satisfied with the arrests made so far.

“The other policeman has been made as a complainant. We fear this will weaken the case. He cannot provide an accurate account of what happened that morning. My father was the one who was assaulted and paraded, he should be made the complainant,” said Farooq.

Sheikh, who has served Maharashtra Police for 38 years, has been on duty at the Pangaon outpost for the past two years. He stays in Latur with his wife while both his sons stay in Pune.

All 16 arrested, including the juvenile, have been booked under sections 307 (attempt to murder) and 353 (use of criminal force to deter a public servant from discharging his duties). The juvenile has been sent to a correctional facility while the other accused have been remanded in police custody until February 24.

Responding to allegations levelled by Sheikh and his family, Latur SP Chavan said, “Sheikh called the station around 8.30 am to inform that a violent mob was closing down shops. He made another call around 8.45 am after which we sent a police team on a jeep to the chowky. The team saw Awaskar, who was also injured, brought him to the outpost and attended to him. They reached the spot where Sheikh had been taken by 9.50 am.”

Chavan also said that it was not mandatory that only the victim of a crime be made the complainant.

“The provisions of CrPC allow a case to be registered by anyone who is a witness or victim to a cognizable offence. Awaskar has narrated the entire episode and we have also recorded Sheikh’s statement. It is a strong case,” added Chawan.

Asked about the main accused, Sandeep Chavan, the SP said there were “three to four more people who were heading the mob” and they would be arrested soon.