PM Modi, in his meeting with members of Subhash Chandra Bose family on October 14, last year, had announced that the government would declassify the files and make them accessible to public. The NAI now plans to release digital copies of 25 declassified files on Bose in the public domain every month.

READ | Netaji files: Here is what we know so far

Modi, in his meeting with members of Bose family here on October 14, last year, had announced that the government would declassify the files relating to Bose and make them accessible to public.

The first lot of 33 files were declassified by the Prime Minister’s Office (PMO) and handed over to the NAI on December 4, last year.

Subsequently, the Ministries of Home Affairs and External Affairs too initiated the process of declassification of files relating to Bose in their respective collection which were then transferred over to the NAI.

8:30 pm: Right now in the country, there is a sense of division which has often been cultivated along communal lines so much so that the word secularism is often used as a bad word… We are waiting for the day when democracy and liberty would be used as a bad word too: Amartya Sen

7:20 pm: Congress has already said that it would like to see all files to be declassified because attempts are being made to raise a controversy and misguide people of the country through a mischievous political campaign: Anand Sharma

7:10 pm: “This is the first time that Prime Minister of India has taken a move to open the classified files. But these are not the intelligence files. What we need is the intelligence files not only of our country but also of Russia, the UK, the US, Japan to solve the mystery,” Bose’s grandnephew Surya Kumar Bose said.

6:50 pm: “The Japanese have shared with us the information they had regarding Netaji… But, I believe Modi should have spoken to Abe, whether it be in Tokyo or in Delhi, or Varanasi… I don’t think he has spoken to him (Abe) regarding this,” claimed Sugata Bose.

6:35 pm: “I do not know whether Modi has done anything on the Netaji issue. I don’t feel he had spoken to Abe (regarding Netaji’s disappearance). He also did not pay his respect by visiting the Renkoji temple… But, other Prime Ministers Jawaharlal Nehru, Indira Gandhi and Atal Bihari Vajpayee visited the temple to show their respect,” he said of Modi’s Japan tour last year: Subhash Chandra Bose’s kin and historian Sugata Bose

6:00 pm: Krishna also said, “the Japanese government had informed the whole world about the death of Netaji. The Japanese Prime Minister is a friend of our Prime Minister. We urge Narendra Modi to talk to his counterpart in this regard”.

5:00 pm: We are happy. If the files were declassified earlier, there would not have been speculations. Both Narendra Modi and Mamata Banerjee have done good work (by declassifying Netaji files): Krishna, widow of Netaji’s nephew Sisir Kumar Bose

4:00 pm: The BJP whose leaders had no role in the Independence movement are basically interested in creating ‘conflict’ between different ideologies for political gains: Nitish Kumar

3:20 pm: BJP can’t claim any leader who were on the fore front of the freedom struggle: Anand Sharma.

3:15 pm: We have said from the very beginning that this is a deliberate controversy: Anand Sharma. 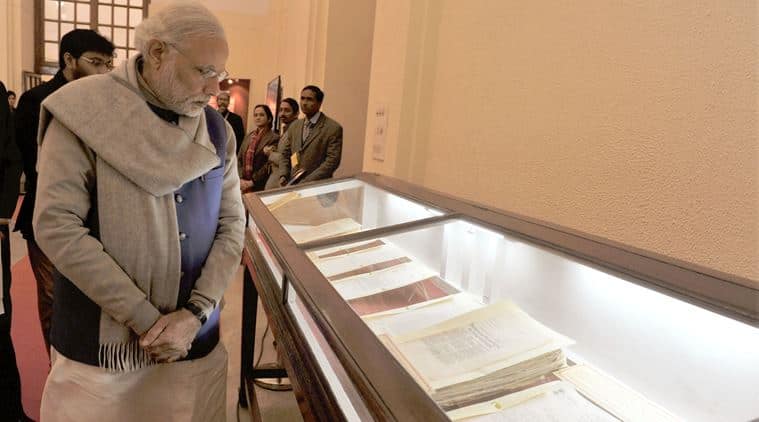 PM Narendra Modi at the National Archives during the launch of the digitised files related to Netaji, in New Delhi on January 23, 2016.

We have said from the very beginning that this is a deliberate controversy: Anand Sharma on SCBose files pic.twitter.com/WJPegbr7WE

3:00 pm: The way PM has carried this out raises doubts about the intentions of the GoI, nation needs to understand this: Anand Sharma

We believe that the truth must come out through documentation and proof: WB CM Mamata Banerjee #NetajiSubhasChandraBose

Family of SC Bose is really happy, they have all come to witness PM declassifying the files: Venkaiah Naidu pic.twitter.com/lqLHsfKaPA

Today is a special day for all Indians. Declassification of Netaji files starts today. Will go to National Archives myself for the same.